Ever since the APA declared that ‘conversion therapy’ was ineffective and often harmful, it’s seemed to most reasonable people (and the scientific community) like an open-and-shut case. “Conversion” or “reparative” ex-gay therapy was a process with religious implications, not actual psychological ones, and it didn’t effect real change.  A new study by researchers Stanton Jones and Mark Yarhouse, however, is now disputing that claim.

Their study followed 65 participants over six to seven years who were involved with Exodus Ministries, an organization that promises to provide support for religiously motivated gays trying to “convert” to heterosexuality. While previous research has found that even on the rare occasion when “conversion” does occur, it’s often impermanent, Jones and Yarhouse found that “23% of the remaining people in the study were successful in changing their sexual orientation toward heterosexuality.  And 30% turned toward chastity, which Yarhouse said was ‘a reduction from homosexual attraction.'” 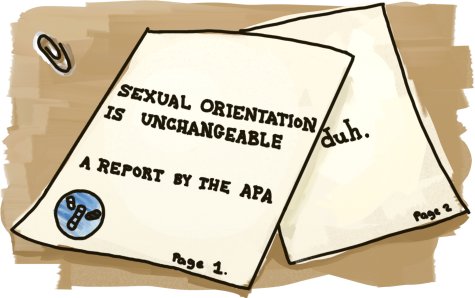 How does that work? Even if no one is clear on the “origin” or basis of homosexuality, the APA is willing to define it as being immutable. Jones and Yarhouse say that this “absolutist” statement is part of what motivated their research. They acknowledge that “23% did not respond to the ministry’s treatment, 20% embraced their gay sexual orientation and the remaining percent reported confusion.” 35 of the original 98 participants dropped out. But they still think that there’s at least a germ of truth to the claim that it’s possible, if not probable, to change.

Others — and in this case “others” is almost the entirety of the rest of the scientific as well as the queer community — disagree. Basically, the question is this: it may be true that 23% of the study’s participants were “successful.” But how is the study defining “success,” exactly? Because here’s the thing: even with all the research tools and scientific background in the world, there’s still no real way to prove that someone really is gay or straight. There are arousal tests, personality tests, blood tests, hormone tests, maybe even a Kill-Bill style truth serum, but in the end the only real measure you have of someone’s sexual orientation is what they tell you it is. There is no known ‘gay gene,’ and the only real evidence we have of someone’s sexual orientation is their own self-report — which, when you’re dealing with strong religious motivations, may not be accurate. Does “heterosexuality” mean that the 23% in question have successfully rid themselves of any and all homosexual feelings, while simultaneously developing a strong desire to tear the clothes off of the opposite sex? Or that they feel they can successfully pull off living as a straight person? In either case, there’s a second question to consider: are they right about their self-assessment? It’s harder than it seems to report your own status accurately. In the same way that drunk people often think they’re more sober than they are, there’s no way to tell if the 23% from this study have succeeded in “being straight,” or just succeeded in convincing themselves (and the researchers studying them) that they are. 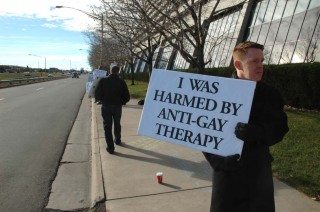 It’s not the only methodological and conceptual problem with this study — suspicions about its total credibility may first be raised by the fact that Jones and Yarhouse both teach at religious universities (not to claim that legitimate research, even on socially divisive topics, can’t be done at religious institutions). Critics like  Dr. Jack Drescher, an associate professor of psychiatry at New York Medical College, point out that the study doesn’t make a strong distinction between  sexual orientation (which gender(s) you’re attracted to) and sexual identity (how a person FEELS about that orientation and identifies in terms of it). Others have pointed out that it seems to be ignoring the major difference between behavioral and identity changes — in short, having sex with someone of the opposite sex doesn’t mean you ARE straight, just having straight sex. There’s been increasing attention paid to therapy based around behavioral shifts in recent years; for many, choosing to live a straight or abstinent life is a viable option to a homosexual relationship, even if they acknowledge that their actual sexual orientation doesn’t change. But that’s not the claim that Jones and Yarhouse are making; they differentiate between the population in the study that’s transitioned to chastity and the population that’s now “straight.” They acknowledge that for some, it’s a lifestyle decision rather than a true change — “‘I’d like to see mental health organizations to show greater respect for diversity for how a person chooses to live their life and live this out,’ Yarhouse said.” — but don’t go on to recognize that their study may show more about how people are choosing to “live their life” than how they’ve managed to “convert.”

Critics have also pointed out that bisexuality is never taken into account — many proponents of ex-gay therapy think of sexual orientation as a gay-or-straight, yes-or-no proposition, and this study seems to be no exception. If a spectrum view of sexual orientation had been used, is it possible that the 23% who were “cured” would have evidenced at least some attraction to the opposite sex already? If so, that sort of calls into question how much of the ability to live as a straight person was really based in the Scripture-based therapy.

Maybe most upsetting is the implication of this study that not only is the APA wrong about conversion therapy not being effective, but that it’s wrong about it not being harmful.

He disagreed with the findings that religious therapies do not harm people, saying he had several patients who blamed themselves after failing programs and fell into depression, anxiety and suicidal thoughts.“They’re told it’s up to them if they don’t change,” Drescher said. “When it fails, as it fails in majority of cases, they feel like failures, after they’ve spent time and effort and money.

In a way, it’s amazing that this is still a topic we’re seriously discussing — although, with a relatively serious candidate for the GOP 2012 nomination still tacitly endorsing it, maybe not. The fact remains that the “bulk of peer-reviewed research” is firmly in opposition to Jones and Yarhouse, and when it comes to queer health either physical or mental, things really are improving. The good news is, thirty years ago, Jones and Yarhouse’s findings would have been considered the norm as far as scientific opinion; the good news about this controversial study as that at least its implications finally are controversial. Hopefully they’ll only become more so. 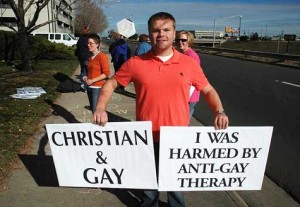