Remember when Sarah Palin produced a mysterious and still-unnamed (although allegedly confirmed?) gay friend out of nowhere to contest accusations of being a homophobe? (Which led to what is still my favorite Dan Savage campaign ever?)  Palin ended up being written off more as a ditz or a kook than a bigot, but the anecdote stuck. And now, in this year’s presidential election, the newest Controversial Female Republican Candidate can make a similar claim — only for Michele Bachmann, it’s an ex-gay friend – Janet Boynes, “ex-lesbian”  and founder of Janet Boynes Ministries, which provides ‘ex-gay’ counseling to those who seek it.

The extent of Boynes’ personal friendship with the Bachmanns is unclear. Most of their references to each other seem to be professional – in her memoir, Called Out: A Former Lesbian’s Discovery of Freedom, she thanks both of the Bachmanns for the fact that “[they] never left my side when things got tough.” In Marcus Bachmann’s allegedly-not-a-provider-or-supporter-of-ex-gay-therapy therapy clinic, there’s a whole display of said memoir, along with a description that says, “Janet is a friend. I recommend this book as she speaks to the heart of the matter and gives practical insights of truth to set people free.” 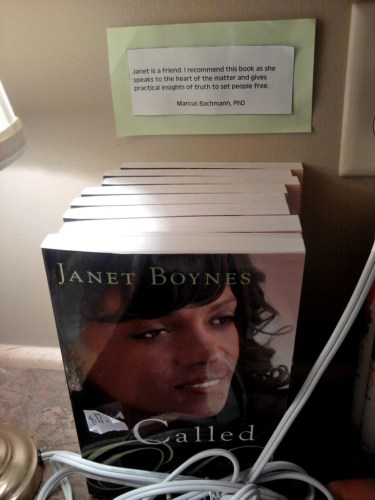 VIA TRUTH WINS OUT

By all appearances, the relationship between Boynes and the Bachmanns seems centered entirely around ex-gay therapy. Boynes has appeared with Michele Bachmann at conferences, speaking to the point that gay people choose to be gay. It’s unclear how they met or how Boynes originally became the ‘sidekick’ that she is now being referred to in media coverage. Bachmann blurbed Boynes’ 2008 memoir with:

Janet’s life is a powerful testimony of the changes that Christ can bring through His healing power from the bondage of sin. To see Janet is to see the face of joy, freedom and peace. I wish everyone could meet this dynamic, young, Christ-filled woman who has dedicated her life to spreading the joy that she has found in a deep relationship of forgiveness from the Father. I hope everyone listens closely to Janet’s compelling testimony.

So it seems safe to assume that whatever relationship Boynes has with the Bachmanns existed three years ago when Bachmann was still a senator. But where did it begin, and what’s the basis behind it? Does Boynes drop by for informal barbecues and church socials at the Bachmann’s on weekends, or is this a more pragmatic arrangement? It’s clear what Boynes would get out of Bachmann’s endorsement of her book, and a continued association with a rising politician with a fervent following. What would the Bachmanns get out of an association with Boynes? 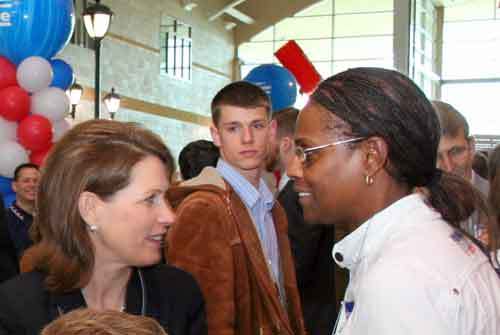 Although they’ve backed off from it in light of the election, the Bachmanns used to take an even harder line on homosexuality than they do now, with gems like referring to it as “personal bondage” and references to Satan. While they may have given up the overt agenda — for now — of relegating homosexuality back to the status of a treatable disorder, and protecting innocent people from its ravages, there was a time before presidential candidacy when it was an explicit goal of theirs. Back in 2008, Boynes’ story was hugely valuable to them – considering that the vast majority of ‘ex-gays’ are male, and often their ex-gay statuses don’t stick when they return to living openly as gay men. But Janet Boyle has been an “ex-lesbian” for 13 years now, and her rhetoric matches up perfectly with the Bachmann’s.

“I was not born homosexual,” Boynes writes in her memoir. “I made a decision.” In her telling, a slew of environmental factors tempted her to make that decision, the way a weakened immune system might make the body prone to infection. Boynes writes that she was born into poverty in Norristown, Pa., one of seven half-siblings by multiple fathers. Her mother was abusive and unloving. Her father was absent. A stepfather molested her. She was tough and tomboyish and liked sports, and people teased her that she might be gay. “Then you start thinking, ‘Well, maybe I am gay,’ ” Boynes told me. She grew up attracted to both men and women, she writes, and in her 20s left her fiancé for a woman, beginning 14 years of lesbianism.

But now it’s an election year, and times are changing – while she can’t and hasn’t tried to take back any of her previous statements about gays, Slate reports that her current response to reporters when asked about the topic is “I am running for the presidency of the United States. I am not running to be anyone’s judge.” If that’s the case, then ties to Boynes might be less beneficial than they once were. What does that mean for Boynes? If Sarah Palin’s “gay friend” was trotted out for the spotlight in honor of the 2008 election, does that mean that Janet Boynes is going to be shoved back behind the curtain – an ex ex-gay friend?