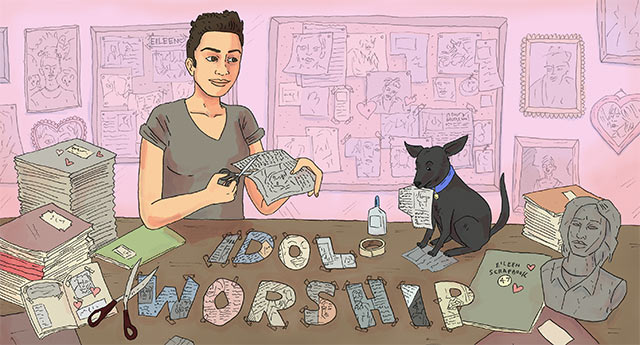 Welcome to Idol Worship, a biweekly devotional to whoever the fuck I’m into. This is a no-holds-barred lovefest for my favorite celebrities, rebels and biker chicks; women qualify for this column simply by changing my life and/or moving me deeply. This week I got ten-ish questions answered by Eileen Myles but really, we mostly shot the shit and then I drooled about her.

I know, you guys. You get it. I like Eileen Myles. 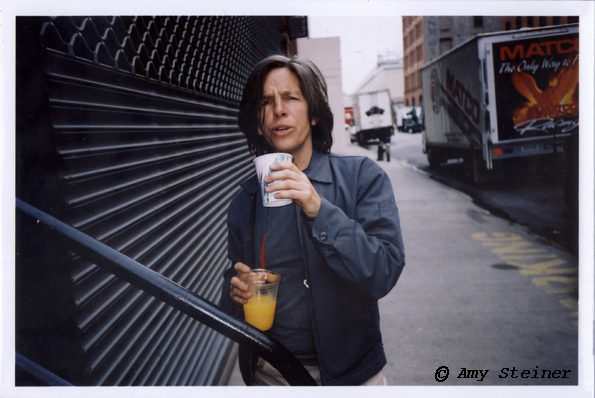 eileen myles is the ultimate lesbian icon, is what i’m saying

Eileen Myles was born and raised up North in Massachusetts, attending Catholic school until she studied as an undergraduate at UMass Boston. She made it to New York City in 1974, where she began to attend workshops at St. Mark’s Poetry Project. Once she escaped suburbia, Myles began to do incredible work. (I assume she did this while in suburbia, too, but it’s a lot better to imagine her in her apartment smoking cigarettes.) I sort of like that she stayed home for so long because I often feel like I stayed home too long. Eileen Myles still got out and never looked back.

And I’ll admit, for the sake of full disclosure, that the reason I’m so head-over-heels with this woman’s words is really mostly because whenever I’ve really needed someone, Skies was that someone. And I thought, if a book can be someone, then Eileen Myles must really be someone, you know? I tend to fall head-over-heels for things, though -i.e., this entire column, but this has always been different. Nobody else, to be honest, even comes close. 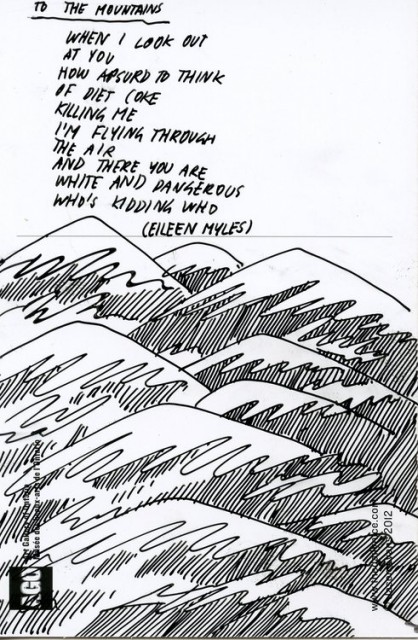 After I read Skies out loud to my friends one drunken night (and afterward kept it on my bedside table for the rest of the year), I realized I’d stumbled upon something extraordinary, someone with a real art inside her. I suddenly felt a lot less alone. I began to read even more and each new book or poem would present me with the once-in-a-lifetime opportunity to be understood by someone I was kind of in awe of, to feel alike in my brain and my heart with someone writing the words down on a page I couldn’t even stop staring at for one minute. Even starkly in the first person, Myles often finds ways to verbalize my spirit better than I can. She’s got a grasp on herself that shows through in her work, a desire to understand herself and rationalize her world and that makes me feel less alone in my own constant need to do the same. She has this way of being that implies that she’s got it all together but she’s also totally trying to share so much of herself with everyone, even the not-so-bright and the hard parts and it’s amazing and brave and very true. It’s sincere and it’s bold and you admire the person doing it, the person living out these long stretches of highway and years of self-actualization and then you realize you understood the whole time how she felt. That somewhere in there was you. I felt close to her in my heartache, in my good luck, in my Indian Summers and still every day that I’m stuck in the middle of my twenties.

I actually met Eileen this past March at American University, while I was still a young’n who studied and stuff, and it was weird, because I’d kept her books in all my suitcases in every trip I’d ever gone on for years and I’d underlined some of her poem titles multiple times and even though 2012 was not my year, I did get to meet Eileen Myles. I was so downright impressed by it all, to be honest, by how the words I’d been underlining sounded just like Eileen in real life. I was so embarrassed by how many books I had brought with me that I didn’t even ask her to them all. But I made sure she signed Skies.

Eileen makes for the perfect lesbian icon: gritty, gravelly, and sincere, she’s literally just a total and complete dreamboat. And her work just gets better, better, and better. She’s written everything – poems, books, short stories, libretto, plays. She’s even written articles, getting smart without pause and kicking everyone’s ass. The woman has published 18 books, for God’s sake. She’s edited anthologies and participated in various projects. I have vowed to read every single thing. And I’ve gotten pretty far, if I say so myself. Some selected best hits for you include Inferno (which we were obsessed with for a good while), Skies, Snowflake / different streets (which I reviewed), Cool for You, and Sorry, Tree. Myles edited The New Fuck You, a standout anthology of lesbo writing that’s stood the test of time in my own heart. 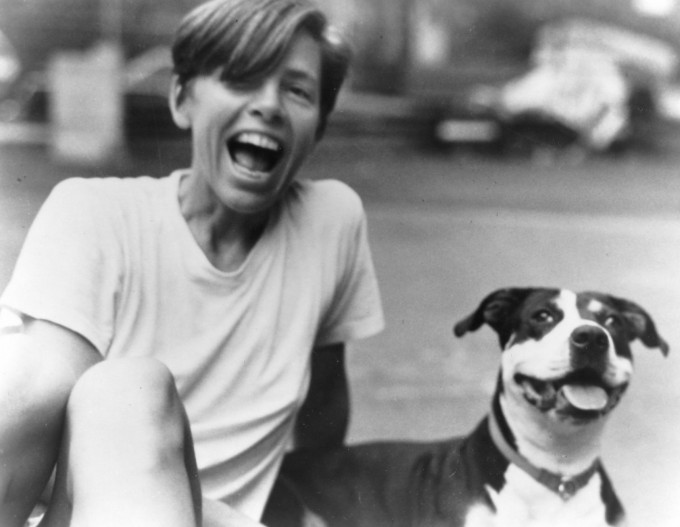 some things never change, y’all – eileen myles and dogs will never stop being amazing, for example 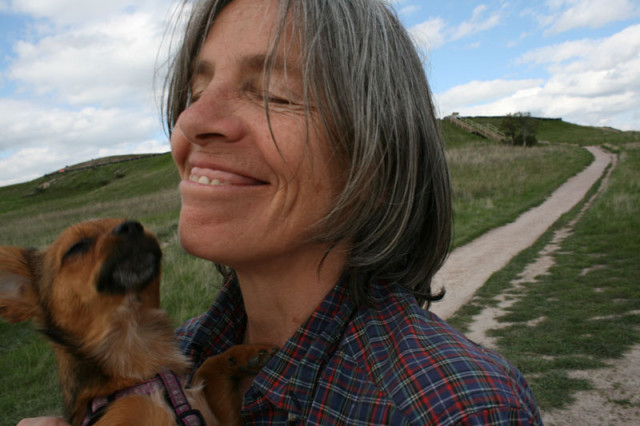 Myles is still in New York – living as a writer, in a relationship with Leopoldine Core, and still has so much to say. It’s like all of the good work and hard words she put together for over thirty years have only made her brain even better, her passion even greater, her skill no longer questioned or proving anything. Bust magazine called her a “rock star” and I call her “my ultimate inspiration” and the entire world calls her “someone with a way with words.” She’s been celebrated, nominated, and written about. She’s been a trailblazer, a romantic, and a wreck. And I love her for it. 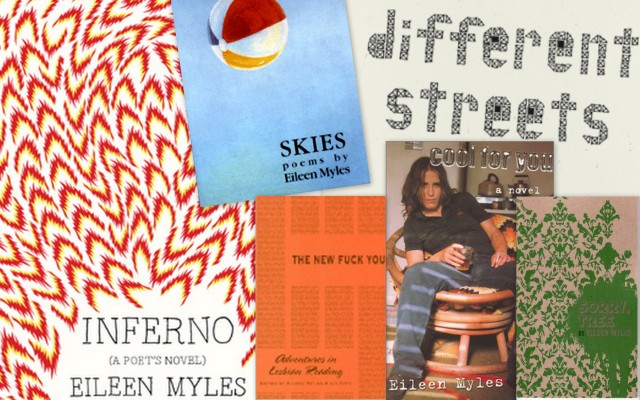 this is your brain on eileen myles

(And once you’re done shopping online for her books and assorted works, you can get ’em delivered and then carry it all around in the badass Eileen Myles tote from OR books, of course.) 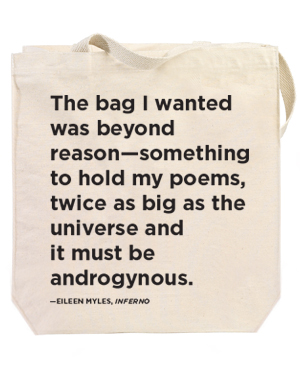 It seems appropriate to start “Idol Worship” with an Eileen Myles Q&A; nay, it seems inappropriate not to. Really I am just trying to get to know her a little more, in any way I can, whether it’s scratching at the meaning from her poetry or swinging my feet at her readings. So the other night I asked her ten questions. Well, ten-ish.

When you read at AU I remember I started wondering how poets select the poems they’ll read. You’ve been writing for a super long time. (It’s been great the whole time.) Do you ever read your old work?

Interestingly I’m part of a small community of people who are typing up Chelsea Girls for republication. It’s mind boggling. I NEED to re-read everything in prose I’ve written because to some extent I’ve forgotten what I’ve written about or how I’ve done it.

What are you working on since you got your Guggenheim Fellowship? Also, congratulations a million times.

I’ve been obsessively working on an essay about being on a homeless retreat for four days last fall. And I’m finishing my selected poems too. After the New Year’s it’s all Afterglow which is my fantastic dog memoir which the Guggenheim is supporting.

All different. I began the homeless essay right here on my computer. But I dropped my computer the week before [Superstorm] Sandy and it was in the shop for a long time, several weeks. I borrowed friends’ computers, my girlfriend’s. But I devolved to one of my favorite methods which is writing longhand in a blue book. You know those exam booklets. I find the size perfect. Also I have a fat fetishived pencil that I’ve actually written about in Snowflake – it’s very gradeschool and I like to write in blue book with that and pencil sharpener close by my side. I love the point, I love losing my edge. The pencil is like thinking. Recently I wrote a poem on the notebook on my iPhone on the subway platform. I like to move around.

Both, but coffee as a religion. Tea is maintenance.

Sure but not purposely and probably not at all. I don’t consider myself writing when I’m writing for hire or just putting notes in a notebook. I don’t think I ever stop though there’s an anxiety when I’m not IN a project of my own making and even if I’m not working on the RIGHT thing. I make myself crazy and usually come around to realizing I’m working and I’m working well.

When was the last time you went back to Boston?

I read at UMass Boston in October where I went to college.

It was heaven. I mean it meant so much to “go home” even though it was not even at the campus I attended since the school has built its own campus since I graduated. But the institution (which was essentially a poet friend Fanny Howe who is teaching there now) inviting me was so weirdly moving. I’m a sentimental fool around home and Boston etc and I crave something from it. Some is the sound of the accents which are really going away. To some extent I sound like people’s parents and grandparents and the localisms are fleeting but I like being in that in whatever way. A poet friend Jason Roush is trying to set up a reading at the Arlington Public Library which I would kill to do.

My family doesn’t live in Boston proper anymore though my mom is in Holyoke in a senior center and I’m going there Thursday because I’m reading on Thursday night in Boston. I’m happy to go there a lot and need to live there for a year as much as I need to live in Ireland and/or Europe for a while in the future, maybe next year.

I’m currently reviewing Jeanne Thorton’s latest for an upcoming review, and I saw you really liked it, which I think might be why I requested to review it in the first place. What kind of stuff do you read when you aren’t writing?

Today Sheila Heti’s book and Pasternak’s I Remember, a literary memoir, and Bubbles, giant philosophical books by Peter Sloterdijk which I can’t recommend enough because it’s about everything inside and out and a revision of how we think about the spaces of the world and their interconnection in this mediated moment.

Do you still write yourself in for President? You should run again so I can.

I don’t. But it was an unparalleled writing experience to see that white space on the ballot and put in your own name. I’d advise anyone to try it and then think about what it means. To the extent that people joke about my campaign and about lesbians in general I think an enormous amount of repression is surrounding what a woman might want.

I often think about what my girlfriend said (which is on a napkin on my bulletin board over my desk) when she wondered “how palatable will women have to make themselves as artists in this depression.”

It’s a depression the size of the world and we fill it by thinking about it I believe.