There comes a time in every girl’s life when she needs to learn something the hard way. She packs up her bag and she runs away, when she gets back, it happens: the thing that suddenly makes the loneliness a little less palpable and everything a little less grey. Something good comes. Or, in my case, two good things. It was a brown envelope from Wave Books and inside was Eileen Myles’ name – twice. There were two little books, stuck together forever in the poet’s new tandem book Snowflake / different streets. Two books wearing the same little white sweater. I breathed in. Eileen Myles still has it. Eileen Myles will always have it. It was February 2012 then. I felt more certain then than ever that I was going to be okay.

Myles brings forth her first collection of poetry since 2007 in Snowflake / different streets, divided neatly between the “new” and “newer” pieces. (Which is so very Eileen that it makes you smile.) The book will be available come April in its softcover edition as well as a digital edition.

I had to wait a month to really sit down and read the tandem book – I’d picked at it piece by piece throughout February, but until Spring Break I kept thinking, “what are the themes?” and I’d just end up starting all over at square one again on buses and trains. Then the day came where I read it, cover to flipside cover, in order and in a couple of hours with only one break in between. Suddenly I saw every theme, every line, and understood every word. Suddenly it all became very clear to me what made the two books different, what brought them together, and what let them stand alone. And suddenly I was crying.

Snowflake is dedicated to Jean Larkin.

I started off this half of the collection wondering what exactly Myles meant by “snowflake.” What does that word even stand for? In poetry everything stands for something, right? What unfolds in the over 100 pages of poems are stories of these singular moments in time, a series of singular moments. Within the volume exist these irreplaceable, completely unique, one hundred percent-without-chance-of ever-being-duplicated pieces of a life.

Myles is on a journey in Snowflake. She is saying goodbye and also hello a lot  – she goes “home,” she travels from San Diego to Los Angeles, she steals pens in New York City, and she loses people and animals she loves along the way. But she is absolutely going somewhere. The poems all form, in the end, this long voyage towards something you don’t know about yet, but she does. Reading it is like the feeling that you are on the road to your manifest destiny but you have no idea what it looks like, just that it exists.

It becomes clear, then, that a snowflake is a lot of things. It’s this tiny, unpredictable, unstoppable, one-of-a-kind thing that ends by fading out or lumping together with a bunch of other unique things. It’s a moment that can’t be repeated or replayed, and that you experience once, a million times.  A snowflake is a photograph you lose when you move to a new city or an entry in a journal that, no matter how detailed, still lacks the smell and the touch and the feeling of what it was like to live in that person in that time. A snowflake is kind of like a life.

different streets is dedicated to Leopoldine Core. It’s kind of like that Robert Frost poem: “two roads diverged in a yellow wood,” only in this instance Myles is not the only person walking. Most, if not all, of the poems in this part of the book emanate with passion for this woman Myles loves very deeply, and in them she reconciles their differences.

…You can’t even see / us. Cause we’re everything / else. And it’s ours. And I / love you in the blind spot / our changing ages.

Myles is distant in age from Core, and in different streets she explores how those differences affect not only her life, but theirs, and the lives they’re living parallel while they lay so connected. But there’s also a disconnect with age that isn’t about your younger lady, but more about your younger you, and the vast sea of time that separates a 59-year-old woman from who she was when she was in her 20s, or 30s. In the end what triumphs is love: the kind of love you feel for someone so deep it connects islands years apart, and the kind for your own self and your own soul.

different streets is the firsthand account of how “two roads in a yellow wood” might become one – if they so choose. It’s a story about two very different lives becoming one beautiful thing, and how even then the paths must diverge. A street doesn’t always have a turn outlet, or directions and lights, or markers, or signs. Kind of like a life.

Eileen Myles Still Has It

What shines through in Snowflake / different streets is the singularity of a life. The incredible isolation and loneliness of having only your own life to live and nobody else to understand exactly what that’s like (since they are so busy living their own), but also the rare and wonder-filled kind of companionship that reminds you that there can always be something we all understand. There are no two snowflakes that look or fall or taste or feel the same, and what Myles recognizes is that neither are two roads – even when they lead to the same place.  Somehow the smallest snowflake will survive and make its way to the ground to stick, and every road, no matter how often travelled, will still stand marked.

the world is flooded with you. / That / good. 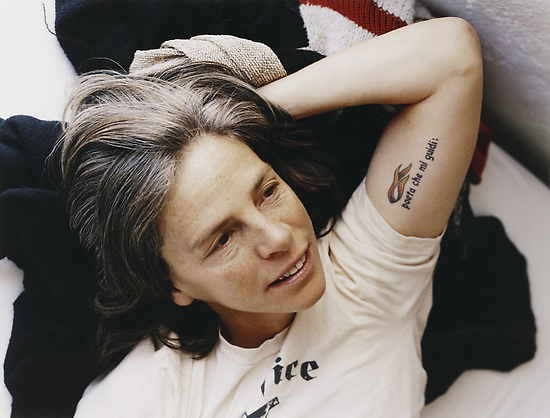