How much do you miss Arrested Development? As you likely already know by now as the news was circulated online near-instantaneously: Arrested Development, the TV series whose name has become synonymous with prematurely canceled shows, is coming back! For real this time!

If you are as yet unfamiliar, buy yourself the DVDs and become enlightened . The show was funny and clever and well-acted and full of weird inside jokes (I’m afraid I just blue myself). It has to be the most tightly written sitcom ever on television, with time-release gags spread out across all three seasons. I personally narrate my entire life in a Ron Howard voice, but that’s just me.

Has anyone in this family ever even seen a script for the new movie?

Consensus is that the show was just too smart and people didn’t ge it. Fox pulled the plug on the consistently low-rated program after only three seasons. The small cult of people who were watching were sad, but in general the cancellation went unnoticed. Meanwhile, Arrested Development DVDs were selling like hotcakes. When Season Three began, the Season Two DVD set was on the top of the Amazon bestsellers list, and post-cancellation the show really took off on DVD.

Many discovered its majesty seasons at a time without bathroom breaks. The fan base is now a substantial group of oft-whiney hipsters and people who appreciate really good television. Its stars arrived with varied levels of professional success and many have seen Arrested Development kick a good career into overdrive, like it did with Michael Cera and in a way also Will Arnett. 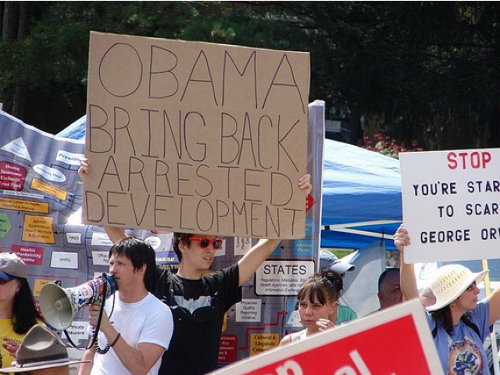 The AD team has been teasing everyone about some kind of return pretty much since the series’ last aired episode. They’ve spent five years dropping hints and seemingly empty promises, so on Sunday when rumors started circulating that it was really, truly, actually happening this time, there was a lot of doubt that it was real. Even when the actors started tweeting about it, the jaded internet remained largely unconvinced. 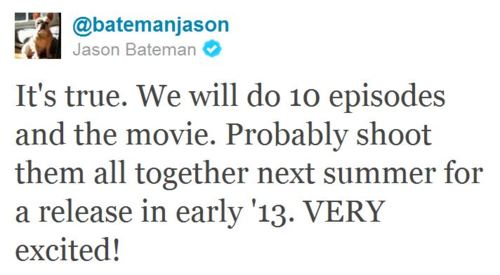 And that’s why you always wait for official confirmation. Fortunately, such proof came from the reunion panel at The New Yorker Festival. Creator Mitchell Hurwitz finally was able to say those magic words, “We’re trying to do a limited-run series into the movie.”

Michael Bluth, aka Jason Bateman, added, “There’s business left to be done, but creatively we are all on board and have a very specific plan about how it would come out and what we would do and when we would shoot it. I think we’re targeting next summer to shoot it.”

So here’s the tentative plan: run a 9- or 10-episode season of the show on an unnamed channel (possibly Showtime or even Netflix) with each episode featuring a character in a sort of “where are they now” situation. Then they’d use those episodes as a springboard into the feature film. The first scene of the film will allegedly feature the family getting back together again.

Let’s do some math, a little transitive logic: Portia de Rossi (Degeneres, whatever) played lead character activist Lindsay Bluth on Arrested Development. Arrested Development is starting a new season that explores each lead character individually for ~22 minutes. Therefore, we get to watch an episode featuring Portia for ~22 minutes in addition to the movie. If you’re not excited about that, I don’t know what to tell you. 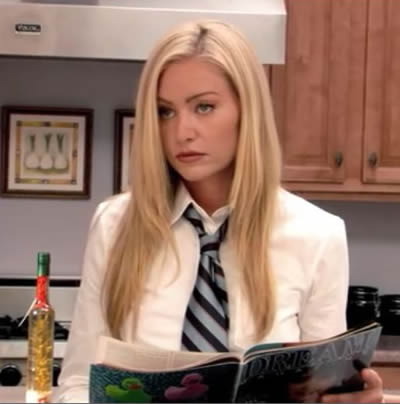 Also, the holdup on the movie was never Michael Cera‘s fault. Apparently, that was all a joke. I don’t want to blame it all on 9/11, but it certainly didn’t help.

So. I really hope this is legitimate. It seems real this time, and if it all falls through again, well, there’s always money in the banana stand. 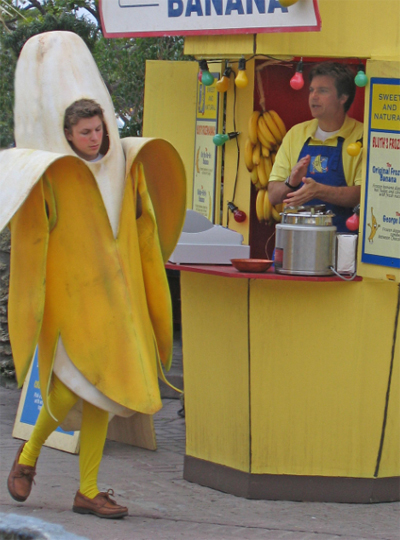