We hope you all had happy homo-holidays (though judging from our Terrible/AWESOME Holiday Open Thread, your experiences were mixed/crazy/hilarious, with a joyous record-high 300+ comments of seasonal story sharing). Meanwhile, we shared our amazing interviews with the legendary Sandra Bernhard, the talented singer Kate Cooper of An Horse, and MUTHAFUCKIN’ TILA TEQUILA. We hope you enjoyed these prezzies, and may your hearts be light!

In the continued spirit of giving, here are the weekly comment awards:

… And Because She’ll Curse You Out Award to Ash on Uganda: “Killing [the gays] Might Not Be Helpful.”: “I guess what I am saying is on the one hand I sure as hell couldn’t beat Zenyatta or Rachel Alexandra at the Kentucky Derby, but on the other hand, not having opposable thumbs and all, neither of them would really last a set against Serena Williams so maybe that’s why she ranked higher…”

On the Christmakwanza Open Thread:

Auto-Aspiration Award to nosidam: “Last night I had a dream that Autostraddle had come up with some sort of gay map you could load onto your iPhone. It was very pretty.”

Highlight of Our Day Award to TSwizzle: “I started drinking at 6.30am in the shower. The day has gone downhill from there.” 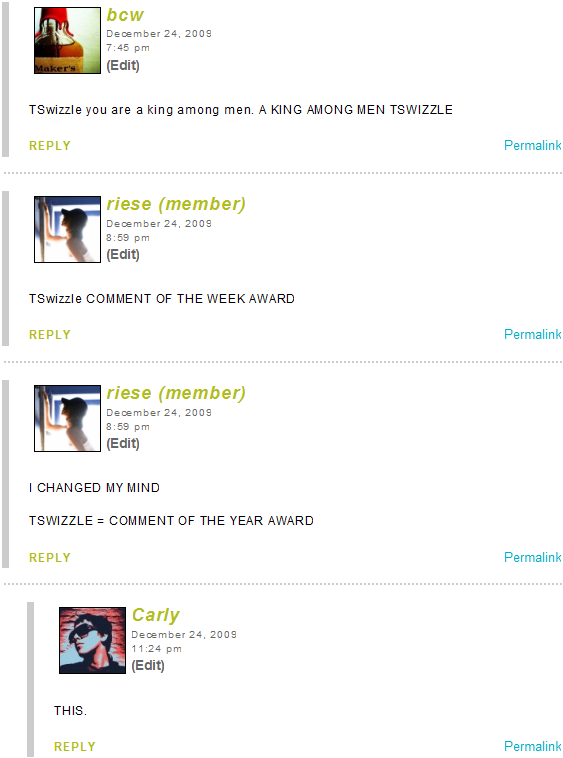 Dullest Color & Conversation Award to annie: “my two grans genuinely spent a good chunk of time this morning discussing the colour (can it be called that?!) beige, and its pros and cons, which pretty much set the tone for the day.”

Debate Team Award to vendingmachine: “Spent part of the two hour trip to grandmother’s house discussing the pros and cons of boy-shorts, ultimately deciding that we prefer regular underwear instead, sorry. Maybe someday.”

bcw’s Gravitar is Not a Gnome Award to bcw: “i flew in on monday afternoon and as soon as we got in the door he was like, ‘i think this calls for a welcome home bourbon’ and poured two fingers of maker’s into a tumbler and handed it to me. and i was like, ‘DAD. it is 1:30 in the afternoon. i need ICE WITH THIS.'”

The bcw Award to bcw: 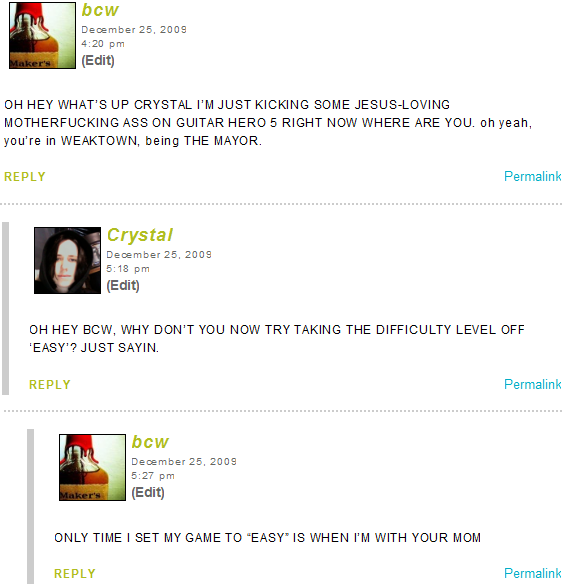 Cowabunga Award to southpaw: “You know, this gift guide is so awesome. it’s like you’re peering into the gay/doesn’t-understand-budgets part of my brain. either that or the radiation from the computer screen is finally getting to me. tubular, dudes!”

Bikini Bottom Award to RachelwasHere: “I love the idea that someone believes I will afford a house some day, even if it is someone who believes every pineapple you cut up COULD HAVE BEEN SPONGE BOB’S HOME (oh no!).”

Flippin’ Adorable Award to ciderlover: “I don’t have a dog so am making little christmas hats for my chickens!”

On Boyshorts 101: Your Complete Guide to Successful Underpants:

Successful Brainwashing Award to wasteunit: “I’m not the kind of person who sees a commercial or ad and says, ‘Oh! I want that! It’s new and improved somehow at the same time!’ Even Billy Mays couldn’t get me with his antics (too soon?). BUT whenever you guys talk about a product I immediately want it with a fiery passion from deep within.”

Subliminal Seduction Award to mindy: “Great article, even though I do feel somewhat like the entire autostraddle team was just trying to seduce me by talking about their preferences in funderwear.”

Suspicious Awesomeness Award to nina.: “everyone DOES love boyshorts. i just recalled one of my friends complimenting me on a pair i was wearing. which leaves me wondering why my pants were off in her room… among other things.”

Ladies is Pimpz, Too Award to Jamie on Mia Kirshner’s Vampire Diaries Role Summons Some of Jenny Schecter’s Parts: 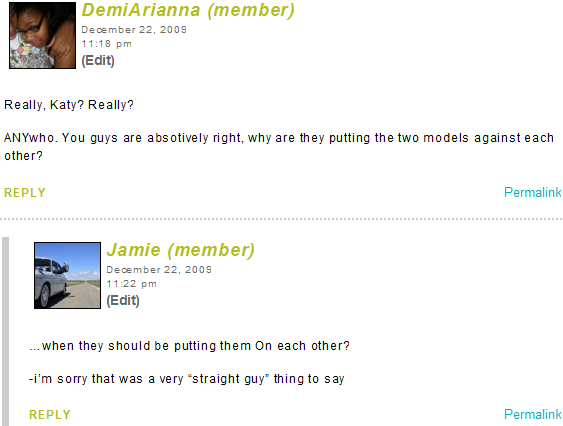 Dykeosaur Award to Kate on Let’s Talk About Tops & Bottoms, Baby: “She was also like a foot taller than me, strong as fuck, and could probably manhandle a tyrannosaurus rex should the opportunity arise, so my trying to dominate her the way she dominated me would be a little bit like a baby panda trying to dominate a fucking brontosaurus… and that was a little too much dinosaur imagery for a conversation about lesbian sex. What the fuck is up with my mind tonight?”

Visceral Reaction Award to e. on Decide Who Will Win the 2009 Autostraddle Televisionary Hot Girl Award!: “Christina Hendricks makes me literally drool. I mean, I don’t slobber all over the place like a bloodhound or anything, but saliva actually starts gathering on my bottom lip into a little droplet of desire and then I’m like, whoops, and then I have to bite my bottom lip. Also with desire.”

The Right Priorities Award to DemiArianna on Forget the Economy. It’s the Gay Sex, Stupid!: “I’m using my half-gf as a pillow right now. She needs to wake up so I can order pizza, holy shizz.”

Hot Pants (Lola Apologizes for Such a Horrible Pun) Award to Julia from MI on A Shot at Tila Tequila: “I could never hate Tila Tequila. She brought Dani Campbell into the living rooms of campus housing everywhere, and made me aware of a previously unknown love of women in flame resistant pants.”