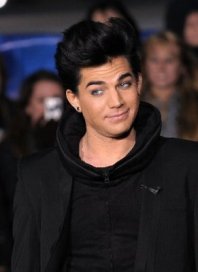 According to allegedly “reasonable” conservative Peggy Noonan at The Wall Street Journal, the problem with America isn’t really the economy or unemployment or our National conviction that the world will spiral into apocalyptic destruction in the year 2012.

Nope; it’s what Peggy dubs The Adam Lambert Problem. You know, a fervent belief in fabulousness and a love for glitter, glam rock and onstage beejers? Secondarily, it’s that the moral degradation of New York City is bleeding into the masses, giving them Swine Flu and Sexytime:

America is good at making practical compromises, and one of the compromises we’ve made in the area of arts and entertainment is captured in the words “We don’t care what you do in New York.” That was said to me years ago by a social conservative who was explaining that he and his friends don’t wish to impose their cultural sensibilities on a city that is uninterested in them, and that the city, in turn, shouldn’t impose its cultural sensibilities on them. He was speaking metaphorically; “New York” meant “wherever the cultural left happily lives.”

She goes on to explain that we have accepted graphically violent, highly sexualized material in our homes on cable but that we do not expect such things on “big broadcast networks” because “they are free … we watch them with our children. The whole family’s watching. Higher, stricter standards must maintain.” And because the AMAs were on during prime time (it wasn’t by the time he went on stage, PEGGY!) and a broadcast network, Adam Lambert “breached the contract.”

Mr. Lambert’s act left viewers feeling not just offended but assaulted. Again, “we don’t care what you do in New York,” but don’t include us in it, don’t bring it into our homes. Our children are here.

After brushing off Lambert’s defense of a double standard, she goes on to use his surprise S&M circus to ask, “have we become a more vulgar country? Are we coarser than, say, 50 years ago? Do we talk more about sensitivity and treat others less sensitively? Do you think standards of public behavior are rising or falling?” 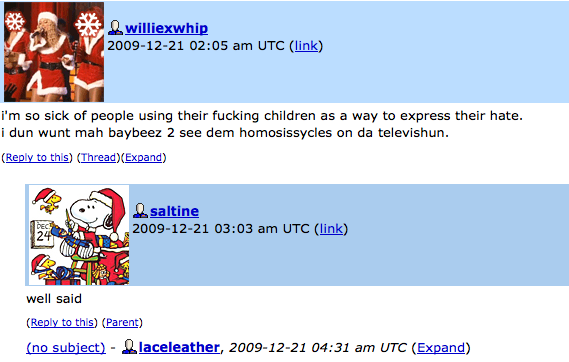 RIP: Speaking of what’s wrong with America, Peggy Noonan, FDNY officials are investigating a December 9th incident when two EMTs buying breakfast at a Brooklyn Au Bon Pain 600 feet from FDNY headquarters refused service to a pregnant woman suffering a seizure because they were on break. The woman, 25-year-old Eutisha Revee Rennix, suffered cardiac arrest and died shortly after. (@bossip)

SAME-SEX-WEDDING: Congratulations to Good As You blogger Jeremy Hooper and his husband, Andrew Shulman, who are the first same-sex couple featured in Martha Stewart Weddings! (@mediaite) 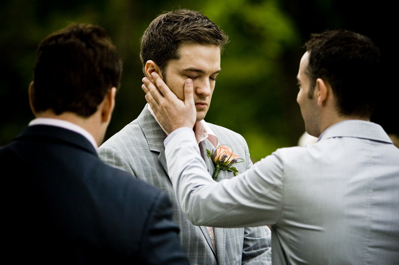 FEMINISM: According to Camilla Long, feminism went away in the 00s. The constant battles about what society deemed a woman “should” be doing “has left a generation of girls feeling puzzled and scared. They don’t know whether to be fat or thin, drunk or sober, clever or stupid.” Naturally she’s wrong in that feminism didn’t just go away, but sadly she’s also not far off when it comes to describing the “I’m not a feminist, but” brigade, who often want to reap the benefits of feminism without labeling themselves as such for fear of being stereotyped as a humorless, hairy bitch. [On a related note, maybe it’s because men still control female depictions of sexuality.] (@jezebel)

COLLEGE KIDS: Quadruplets accepted to Yale! I like “the artist” best b/c of her eye makeup:

ASK PRO FOXY: Ask Professor Foxy: A poly, queer, trans 17-year-old asks “the girl I’m interested in is a couple weeks shy of 15. She’s definitely a much more mature and self-actualized person than her age would suggest, but the fact remains that there’s a huge difference in our life experience … I’m so afraid that if we were to be together, I would somehow break consent, pressure her, or in some way hurt her because of the hierarchy that comes from our age and experience difference. And even more pressing, is she old enough to consent?” (@feministing)

COMING OUT: International rugby star, Gareth Thomas, has announced that he is gay. Yay! We need more athletes to come out. The 35-year old who retired from internationals after the 2007 World Cup, but still plays for Welsh provincial side Cardiff Blues, also says he doesn’t want to be known as “a gay rugby player.”

B-ROLL: We got that B-Roll!