It is a matter of national survival that we never get used
to the president’s hair. We can’t, for instance, look at a picture
of the exploded rooster comb he’s managed to cement up there
and say, Yeah okay that’s the president. It’s not okay. Just as
it’s not okay to bring a radioactive ferret to a house party,
the president’s hair threatens the very foundation of cooperative
society. Nothing Day-Glo ever crossed a land bridge, or helped
bring down a mastodon. The way you may feel about that
friend with the combover neither of you will talk about
(not even in a stiff wind), the way you may have felt when you got
put on the team coached by the dad with the unfortunate toupee:
this is not that. This is more like someone freeze-drying a fish taco
and nailing it to his skull—though even then someone could say,
“Hey, I see you’ve nailed a fish taco into your head. Would you
care to discuss that?”—whereas in the case of the president’s hair
nobody has any idea what’s going on, and it’s undiscussable. It’s
a conversation stopper—like when the man seated next to you
on a plane informs you that he’s built a UFO viewing station
on top of his barn. The spectacle of the president’s hair must remain fresh
as a stinking corpse. We need to maintain a case of national whiplash,
incurred from double-taking each time we pass a TV screen or newsstand
and see him glaring beneath that generous helping of lobster vermicelli
he’s decided to go through life with. The headlines should read
WHITE HOUSE HAIR SITUATION REMAINS WEIRD,
and most of all the people around him need to laugh.
Close aides and senior advisors may be limited to titters,
the occasional snort disguised by a hand to the face, but visitors,
foreign heads of state, are free to smirk and chortle, and both sides
of the aisle to openly guffaw when he strides into the house chamber
sporting that floppy visor spun from pure Siberian twat fur.
Let peals of har-de-har echo through the halls of the Capitol
until he stomps off to tweet the State of the Union from a remote locale.
It is our patriotic duty to never go numb. Whenever
the president comes into a room let us rise, gawk, point,
and howl like our life depends on it, because it does. 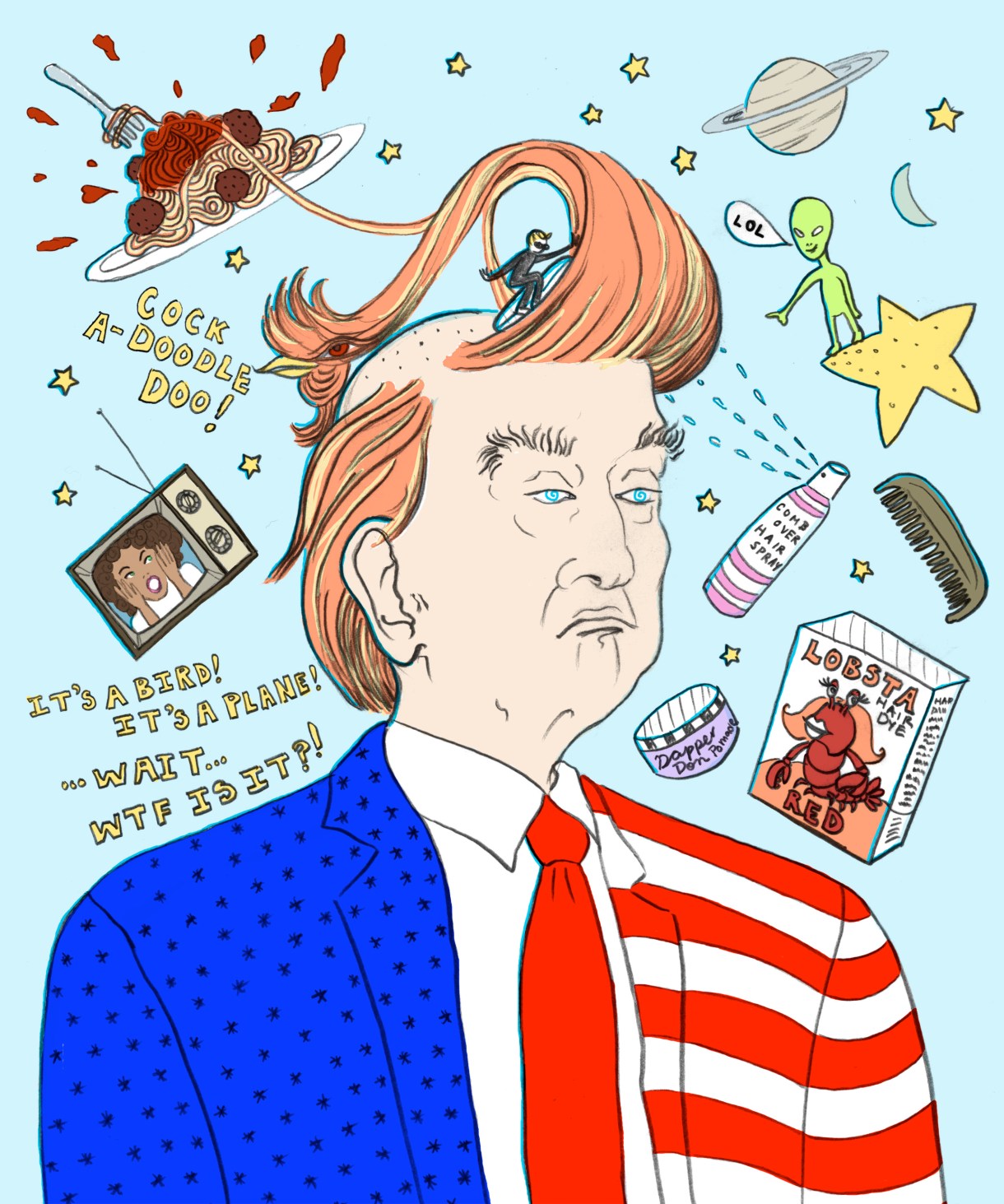 Illustration by Laura Rosenbaum for Autostraddle

Diana Goetsch is a poet and nonfiction writer living in New York City. She’s published several collections of poems—most recently Nameless Boy (Orchises Press, 2015)—and has appeared in many leading magazines. From 2015-16 she wrote “Life in Transition,” a blog about trans experiences and issues, now archived at The American Scholar online. She teaches writing on a freelance basis, and works with trans seniors and at-risk youth, training them to meditate. Diana can be found online at www.dianagoetsch.com.