I hope this week made you as majorly excited as I am (which is roughly this excited!) Robin’s Adam Lambert photoshoot is pure eye candy! Nat Garcia’s new webseries is ready to fill your computer screen with sexy! Top that off with the life-altering launch of our new blog Technostraddle, and it’s almost too much awesome to handle! (Almost.)

As Autostraddle grows and continues it’s path to world domination, you keep making more and more brilliant comments. For us, there’s no such thing as too many — we love ’em all:

Nerdy Hot Award to Texmez on Victoria’s Secret Fashion Show Recap: “You guys just managed to connect my two most favourite things in the world – Beautiful women in underwear and Legend of Zelda.”

Best Method of Protest Award to nina. on New York Senate Votes Down Gay Marriage: Open Thread: “i think i’m going to go have a bunch of gay sex in new york now.”

Word Association Award to Saphicsass on CBS Says “Three Rivers” Future Uncertain, Now Shane Can Be With Carmen Again 4Evs: “Colin Firth is a great actor and all but I really can’t stand his name. Maybe it’s because “Firth” makes me think of the word “girth” which makes me think of penises… which make me think of gouging out my eyes. So there you have it, Colin Firth. Your name makes me think of painful penis punishment. I need a good ole fashion lesbian loofah to scrub you away.”

Nostalgia Overload Award to Perica on If The 00’s Are The Worst Decade Ever: “there was just something about the ’90s and being able to run around in those sweet elastic-y spiral shoelaces with flannel tied around my waist only slightly obscuring my fanny-pack which probably had a beanie baby sticking out of it and a tamagotchi key chain…”

Nostalgia Overstimulation Award to Leah on If The 00’s Are The Worst Decade Ever: “Thank the Lord I grew up when I did. Sometimes my Barbies dry humped, but that’s as bad as we got…”

the bcw award for bcw to bcw on Help Name Nat Garcia’s new webseries:
“whoever [thought of these names] has a bright future naming drag performers. this post keeps making me think of nat king pole,” and on Google Wave How-To: “i think “google wave” should refer to when you wave at someone you recognize while simultaneously whispering to the person next to you to remind you why you recognize that person you’re waving to.” 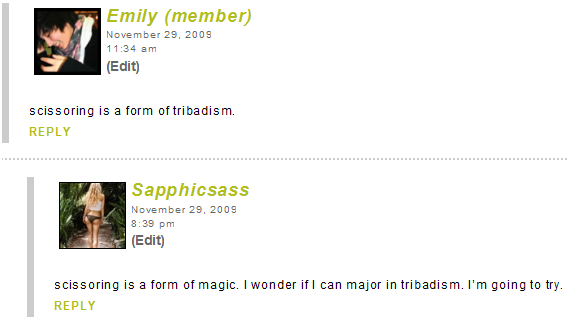 Train of Thought Award to ManillaPudding on Uganda’s Bill to Punish Gays with Death Supported by Actual Human Americans: “Referring to fingers as digits makes me think of math… and monkeys. And finger blasting kind of sounds like pressure washing. Speaking of which, I need to do to my driveway.”

Super Villian Award to Isabelle on Samantha Fox Gets Off TV, Into Hot Tub with Girlfriend & Into Your Hearts: “So glad to be informed that pale is “in”. Thx twilight. Now I just have to work on making red hair the latest craze and my plan to take over the world will be half-way complete.”

Master Plan Award to Jamie on Lesbosexy Sunday: “we shouldnt slap them (cause they might turn it around and claim that there is a rise in violent/aggressive homosexuals and then offer up a diagnosis to something called psychomosexualisis and treat it with some sort of drug like tylenol but not really)”

Visionary Award to Christine on Right-Wingers Won’t Shop The Gap Until Ads Spotlight Jesus: “I totally thought it was whiskey or some for of alcohol. OMG I just looked again and I totally see the gnome now. But maybe that’s the whiskey talking.” 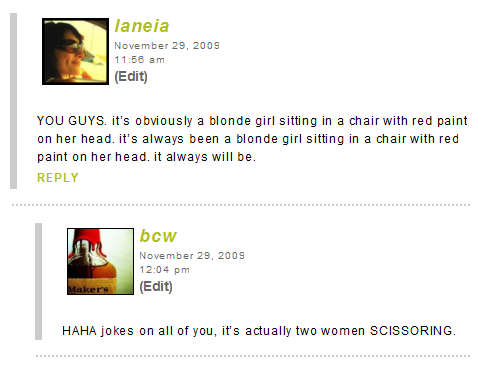 A Few of My Favorite Things Award to Vikki on Right-Wingers Won’t Shop The Gap Until Ads Spotlight Jesus: “I like socks from the Gap and Autostraddle and blonde, bourbon soaked gnomes (though I’ve never met one – I’m sure they are lovely).”

Signage Award to R on Photoshoot with Adam Lambert, Autostraddle’s Sexiest Man of 2009: “BRB making a “would go transqueer for Adam” sign.”

Sexual Deviant Lingo Award to southpaw on Victoria’s Secret Fashion Show Recap: Lesbians Can Objectify Women Too!: “I love trees and I would totally have sex with a crape myrtle if it bought me a drink cuz you know that thing would branchblast you until the sun came up.”

Fond Memories Award to Jules on Apple Tablet Rumors Persist: How Steve Jobs Immaculately Conceived A New Mac: “I remember a couple of years ago before the iPhone was introduced and the only people our age with smartphones were my douchier friends (and ex-girlfriend) who got Blackberries for their investment banking jobs. They (and their buttoned-up managers) were all OBSESSED with the shitty Brickbreaker game that came with it and derived great happiness from the itty bit of joy it added to their long, bleak days.”

Back to the Future Award to alphafemme on Google Wave How-To & Review or “Team Auto Gets Into Wave, Panics and Breaks Wave”: “I feel like I’m jumping up and down on the sidewalk waving at everyone and hoping they’ll notice me because I’ve got awesome charisma and a really hot outfit, but they just pass me by because they don’t realize the 90’s are in again and they think my bike shorts are ugly.”

I Was Yours Award to Carmen on Welcome to Technostraddle, Our Brand New Tech, Gadgets, Gaming & Design Blog!: “I felt Technostraddle in my legs before I even met it.”

That’s a Good Look for You Award to Paper on Tina Fey, Felicia Day, Rachel Maddow & Beyond! Serving Up Spicy Hot Geeks: “I’m just a big smile right now. A big smile in a button up shirt and ginormous glasses.”

Don’t Rain on my Gay Pride Parade Award to Jamie on The Week of Gays in Unexpected Places, Like Outer Space & Behind-the-Scenes: “i screamed “NO!” to which my 10 year old sister cleaverly responded ‘not everyone is gay, you weirdo'”

Sensible Solution Award to Lexi on Get Involved in World AIDS Day: ‘Tragically, the Face of AIDS is Resolutely Female.’: “In a way I suppose they don’t want to rub homophobic voters the wrong way, but they should just STOP BEING SUCH HOMOPHOBIC SHIT-FACES. That would stop this problem entirely.”