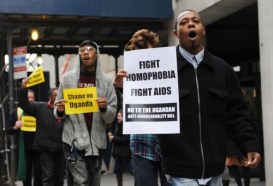 UGANDA’S ANTI-GAY BILL: Uganda considers death sentence for new bill before parliament: Under an anti-homosexuality bill currently before Uganda’s parliament, life imprisonment will be the minimum punishment suffered for accused homosexuals. If the accused person is HIV positive or a serial offender, a “person of authority” over the other partner or if the “victim” is under 18, a conviction will result in the death penalty. Oh, and the scary part doesn’t end there: members of the public are obliged to report any homosexual activity to police within 24 hours of witnessing it or risk up to three years in jail.

Support from Americans Conservative Leaders: Remember Rick Warren, the pro-Prop 8 pastor who spoke at Obama’s inauguration? Well, Martin Ssempa, a Ugandan pastor who has endorsed proposed legislation, is friends with Warren has made appearances at pastor Rick Warren’s church where he was embraced warmly by Warren and his wife. Though Warren distanced himself from Ssempa in October by saying Ssempa does not “represent him, his wife or the Global PEACE Plan strategy,” Warren will not go so far as to oppose the legislation directly.

On Meet the Press this Sunday, Warren re-stated his neutrality on this issue in Uganda: “As a pastor, my job is to encourage, to support. I never take sides.” (Apparently Warren has one face in the US, and quite another in Africa.)

The implications are dire. It’s not abnormal for foreign heads of state, like Museveni, to have ties to American politicos. But he’s deeply routed in a secretive organization that promotes hatred under the guise of loving Jesus. And the very people — America’s elected officials who believe in human rights — we would expect to pressure Uganda’s lawmakers not to make such a bill law are turning out to be its biggest supporters. 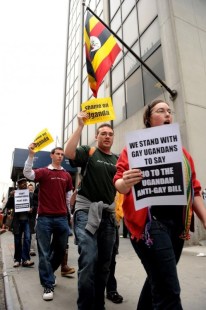 World leaders speak out against Uganda’s bill: Canada’s Prime Minister Stephen Harper met privately with Museveni to express “Canada’s deep concern and strong opposition to the bill.” British Prime Minister Gordon Brown has expressed his opposition and Sweden has warned that it will cut back on development assistance should the bill pass.

Concern from AIDS prevention activists: Currently, 7.5% of women and 5% of men in Uganda are living with HIV and according to Avert.org, Uganda is often cited as a rare example of success in a continent facing a severe AIDS crisis, where AIDS prevention campaigns stressing monogomy and condom usage helped bring adult HIV prevalence down from around 15% in the early 1990s to around 5% in 2001.

Therefore HIV educators and human rights activists are warning Uganda that the anti-gay bill will “make it virtually impossible to reach homosexuals with the knowledge and education and condoms that prevent the spread of AIDS” and threaten progress.

What’s his excuse?: So why has this law gotten this far to begin with? Well, according to the Ugandan president: “I hear European homosexuals are recruiting in Africa. We used to have very few homosexuals traditionally. They were not persecuted but were not encouraged either because it was clear that is not how God arranged things to be.” 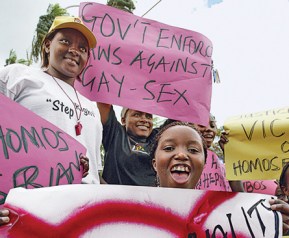 From Free Uganda, a blog mostly dedicated to revealing the human rights violations happening under this tyrant: “As a straight person, I feel its our duty to educate the public that homosexuality is not a choice but a disability that we as a society need to understand and sympathise with rather than persecute them … How many times have you heard, people persecuting epileptic people of which Mrs Janet Museveni suffers from? Never!! We shall stand-by our Lesbians, Gays and Trans-genders community 100%, during these dark-times!!!!” (I’m not sure if the word “disability” is a translation issue or if that’s really what they meant to say.)

CIVIL UNIONS: Some gays seek renewed focus on civil unions: “There is a real need among some folks to put their lives together, to have joint credit cards, a house and children. We need a set of actions for that, but the marriage fight is toxic to other types of reforms.” Also a few weeks ago The Village Voice did a cover story called Who Do We Have to Blow to Get Gay Marriage in New York, which I thought was pretty awesome, but kept forgetting to link to.

SAME-SEX MARRIAGE IN THE COURTS: Gay on Trial: Although groups like Lambda Legal and the ACLU have taken a careful approach to gay rights legislation, the case against Prop 8 brought by attorneys David Boies and Ted Olson (strangers to the civil rights fight — actually Olson represented Bush in Bush v. Gore), which will go to court in January, is facing the issue head-on and daring to change everything. “Perry v. Schwarzenegger will ask the ‘ultimate question of whether gays have a federal right to marry, but because the case is alleging that Prop. 8 violated the equal-protection clause of the U.S. Constitution, the federal court decision will have implications for gay Americans in nearly every arena of public life, from housing to parenting to military service.”

RELIGION: This week, 150 Christian religious leaders unveiled the Manhattan Declaration: A Call to Christian Conscience, a manifesto signed by prominent Christian leaders which calls for “staunch opposition to things like abortion, gay marriage, and other satanic liberal agendas.” The Village Voice tracked down one of these signers and has a few questions for him.

HEALTHCARE/AFGHANISTAN: One of President Barack Obama’s closest Republican allies in the Senate urged him to put health care reform on the back burner and focus on Afghanistan. Sen. Richard Lugar (R-Ind.), a trusted GOP voice on foreign policy matters, told CNN’s “State of the Union” that in light of a forthcoming increase in troops to Afghanistan, Democrats should turn their attention to matters of war and money. Did you think you could not get any more frustrated about healthcare? Do you feel like tearing your hair out because there is no denying that we do, in fact, need to get out of Afghanistan? Are you glad you’re not President Obama? (@huffingtonpost)

SEX SCANDAL: Another female teacher has been accused of a lesbian affair with a young female student, when you read this article you are going to be confused about what “digital intercourse” is, like you are going to think it is cybersex, and then realize she’s talking about fingerblasting. (@news.com.au)

A NOTE FROM NATALIE:
Hi lovely readers of Autostraddle:

The Institut Pelangi Perempuan (IPP) – the first youth lesbian organization in Indonesia – and Shape Your Life – a Toronto based project for women and trans people – are joining forces to advance sexual, gender and reproductive rights through boxing.

This initiative offers boxing to survivors of violence as a space to build confidence, strength and self-esteem and let off steam! It is being introduced to the IPP for youths who have experienced violence because of their sexual orientation. Come to a fundraiser to help raise money for boxing equipment for the IPP. This is a sassy and worthwhile event to attend if you are in Toronto or nearby.

Here is the info:

Fighting back. Jakarta/Toronto/Jakarta. Taking a Stand.
A fundraiser for a new young lesbian boxing project in Jakarta, Indonesia

You can find out more details by clicking here.