If you’re a gay lady who likes to look at other ladies, chances are you’ve at some point felt conflicted about your primal urge to stare at and consequently objectify hot women on the teevee, in magazines, or perhaps in your Bio-Chem Lecture. As women ourselves, we’re always being objectified by society and random street hecklers, and it can really suck in many ways. So the big question for lesbians remains: is there an inherent difference between the male gaze and the female gaze? Is it exploitation when women are objectifying women? Is it okay for us TO HAVE LOOKED FORWARD TO THE VICTORIA’S SECRET FASHION SHOW WITH BATED BREATH? 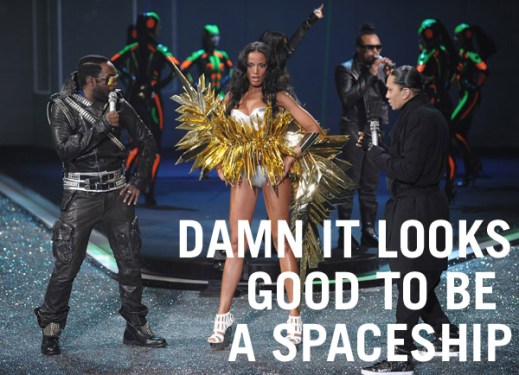 Well, if you’ve gazed at our girl galleries, you probs know where Autostraddle comes down on this issue. We like to look at hot girls, and historically the women we habitually crush over are more likely to be powerful, smart AND hot, as revealed every year in our Hot 100 lists. Men can objectify women because women are the subordinate class, and in the act of objectification, members of the oppressor class are able to remove the elements of common humanity which might enable identification or empathy. But when women look at women … well, we feel it’s with an informed eye, and it’s inherently different/less exploitative than when men look at women. What do you guys think? Are we just rationalizing because we really like to look at women in boyshorts?

Ok, that was really deep for the intro to a fashion show recap. But we thought it was worth throwing out there! Moving on TO THE VICTORIA’S SECRET FASHION SHOW.

As you probs know, the Victoria’s Secret Fashion Show is one of the best things about December. It’s been happening for many years, and I have been a faithful viewer for many of those. In fact, tonight was my fourth annual watch party! Typically, I make boob-themed desserts, such as bra cupcakes.

Alas, finals are coming up, and I had no time to bake. LUCKILY FOR YOU, this means I have enough time to liveblog/recap the show! Intern Lex is pitching in for some color commentary as well. Here we go!

Lex: They all look like high fashion birds. Except for that robot.
Sarah: OMG look at that stage. I would be having a seizure if I were there. Green lasers! Glow sticks! Is she wearing sheet metal?
Lex: It looks like it. There is too much metal for my liking. I feel like some unlucky person would get hurt trying to get into that.
Sarah: It’s like a chastity belt for 2009. 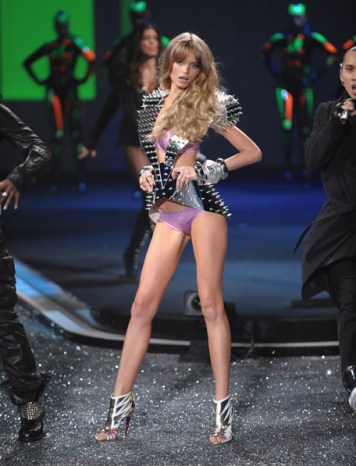 Riese, via Twitter: @autowin –  I don’t think any of the things on the Victoria’s Secret teevee show could be worn in my bed without puncturing my mattress. 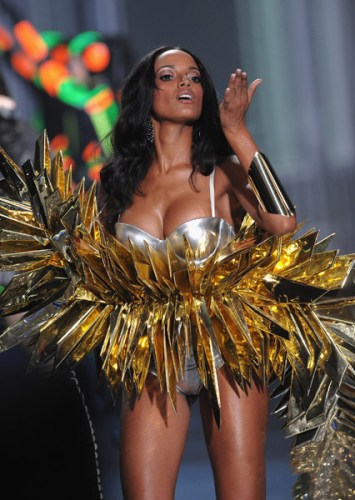 Lex: OMG this is ANTM in disguise. YOU CANNOT FOOL ME HEIDI. I know ANTM when I see it. Where is Tyra Banks Kim Stolz? This is like a weird Project Runway/ANTM mashup. 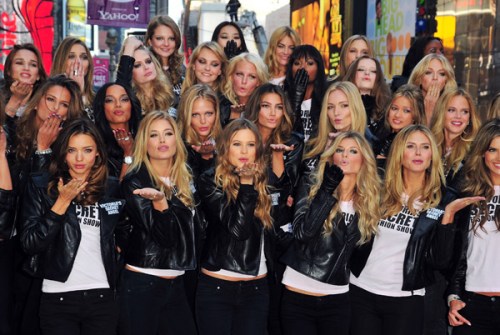 “She has extremely large breasts. And a good sense of how to manage them.” (the photographer dude who did a lingerie shoot with the ANTM Angel hopefuls in Grand Central Station, which was described by the prospective models as “my greatest dream in life.” You know to be photographed in their underwear in the middle of a public place. They should submit that story to Cosmopolitan as a sexxxy fantasy.) 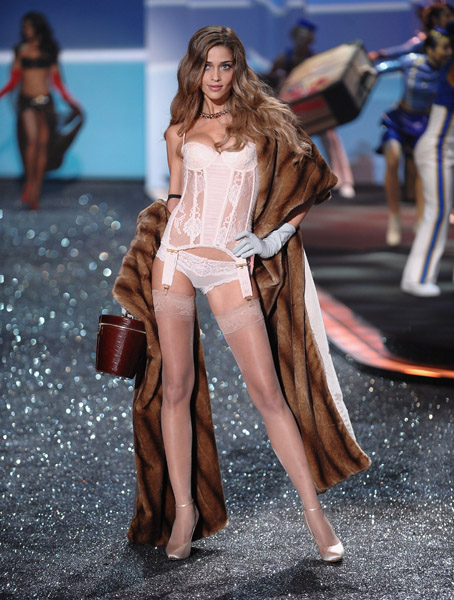 Sarah: Who are these dancers?
Lex: Porters of the Future!
Sarah: These random slow-mo moments are SO ’90s.

Sarah: Sidenote, I do not love Pink. Or their $70 sweatpants. Oh wow, is that a balloon-animal wing set?
Lex: OMG bubble dress! Gaga is everywhere! 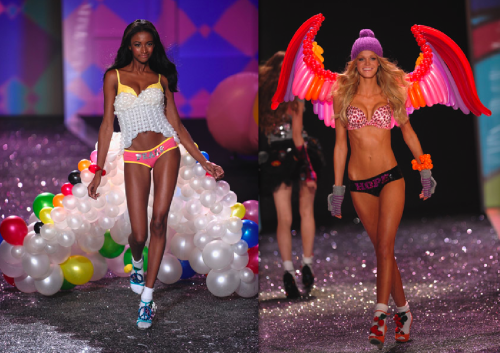 Lex: Did she just kiss her biceps?!

Lex: That girl just did an ass shake. And her underwear said Call Me. I’d definitely call her. 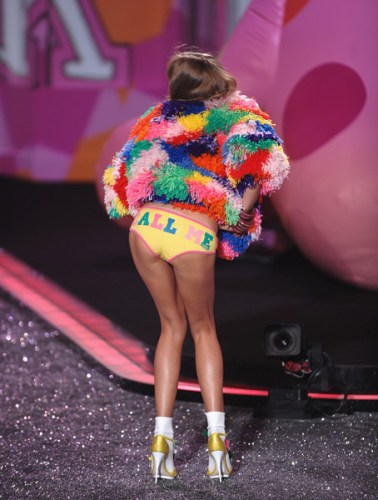 In which we fall all over ourselves for Heidi Klum:
Lex: OMG HEIDI
Sarah: HELLO HEIDI I LOVE YOU SO MUCH. THAT DRESS IS BEAUTIFUL. YOUR HAIR LOOKS GREAT TODAY.
Lex: She just had a baby! She’s a baby mama!
Sarah: This is Heidi’s moment. She looks excellent. 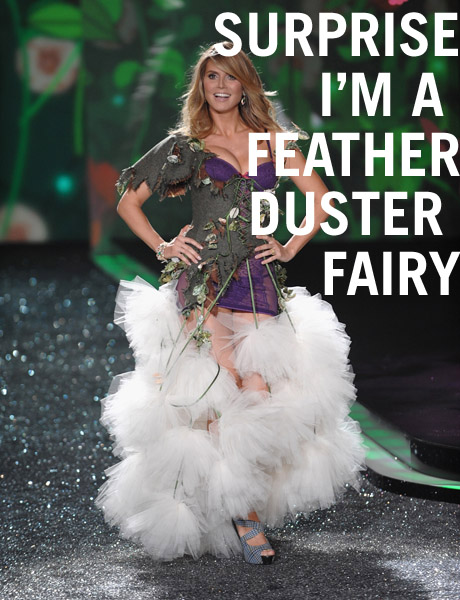 Lex: This is like the Legend of Zelda.
Sarah: Yes. The forest level. Plus a few fairytales. Oh god, that last girl was just wearing a tree. 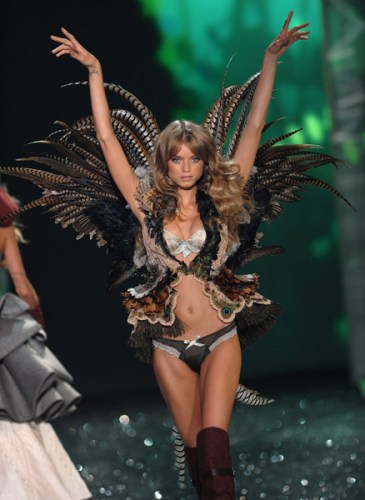 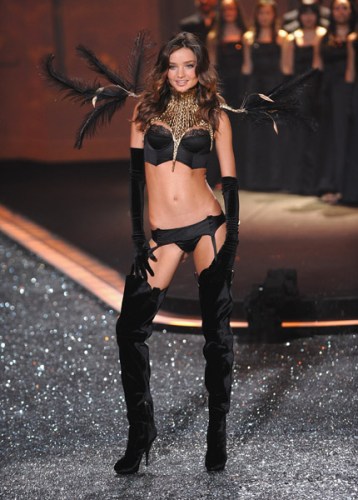 Our Top 5 Feelings Overall:
1) MUSIC. We want a soundtrack to this fashion show, seriously. Two Kings of Leon mashups, Phoenix, La Roux, etc. So so great! (Yeah, we aren’t including Black Eyed Peas in that. Not that I won’t dance if it’s playing.)

2) The stage.
X: It’s in the shape of a V. Get it? So subtle.
Sarah: Yeah. Also, V is for vagina. It’s like they’re walking on a giant, shiny Georgia O’Keeffe painting.

3) Confused arousal. That one girl was a sexy tree. We’re not sure how to feel about that.

4) Seizures. So many lasers and shiny objects!

5) Miranda Kerr is the cutest human being ever.