Somehow somebody made the mistake of giving a few of us Autostraddle folks Google Wave invites, and things got totally buck-wild from there. Here are our thoughts on Wave, from within the belly of the beast… 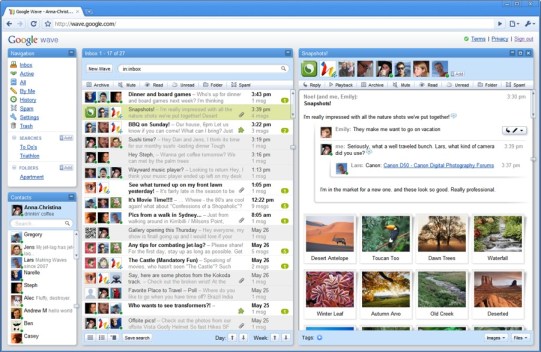 this is what a google search says google wave looks like

+
I bet you want Google Wave. You may not even know what the hell it is, but some primal part of you buried deep within your id knows that you need it. You need it bad. That’s fine- we all want what we can’t have, even when it’s geeky and confusing.

So what is it? Wave is Google’s newest experiment in social media. It’s kinda like if twitter and gmail went head to head in an one of those intense MMA death-cages. Except it’s not really at all like that. It’s like this:
+

First things first. Somebody invited somebody to Wave.

Remember when Gmail was super-exclusive and you had to have invites? That’s how Wave is. You can’t get in unless you are directly invited or you opted into the beta 100 years ago. So, your friends may have “nominations” to give out which means you may get invited (lame) or invitations, which just get you into Wave right away. However it seems that by last week the invitations had definitely made the rounds and many of us were on the guest list. That’s what you want, yo.

Okay, you’re in. Here’s a disclaimer before we start:  Google Wave is in beta. Anything in beta means that thing is totally wacky and the developers want you to report to them how wacky it is so they can fix it. Wackiness ensues! Read on!

STEP 2: GET YOUR CREW ON WAVE

So, once you’ve got your super sweet Wave invite and you totally feel like the shit, you’ll realize that new invite glow can only last so long when you’ve got no one to glow upon.

So instead of stockpiling your own invites (if Google deemed you fit to have any) or selling them on ebay (yes, this happened early on), you should invite your friends. Yeah, you’ll feel less awesome because now all this riff-raff has Wave too, but the first thing to know about Wave is that it totally blows if you’re the only one on it.

How cute…they say they have stamps to lick. WELL HURRY UP AND LICK THEM, I’M LONELY. Done? Okay, good.

Okay, sweet, my crew is on Wave. They’re pretty hot, I know.

STEP 3: GET TO KNOW YOUR WAY AROUND

You got your pals down there on the bottom left, your inbox of waves in the middle there and over on the right is whatever wave you are editing.

You can minimize those and they will zoom up to the top, which is pretty sweet. What is a wave, you might ask? Well, according to the dictionary it is “any surging or progressing movement or part resembling a wave of the sea” which sounds kinda sexual it is kind of like an email + gchat + something else. Maybe Facebook. A wave (over where it says “why hello sara quin”) is where you’ll do your waving, obvs.

So, basically you start a little bubble over there on the right hand side, invite people to it and see what happens. Perhaps you could use it to do work and share ideas. We used it for…well, I’m not sure exactly. You’ll see.

I made note of these things immediately, because they drove me crazy from the get-go.

Also, use Ctrl+E to edit a selected wave.

SUPER IMPORTANT THING TO KNOW ABOUT WAVE: Get to know the keyboard shortcuts, or I promise you will hate Wave immediately. Wave is SUPER annoying when you have to click around for everything. If you don’t this happens:

You will endlessly propagate blip upon blip, eventually becoming buried under their sheer weight and perishing, like a skier in an avalanche.

A wave is the whole conversation, like an email chain. A wavelet is a mini-conversation that springs out of a larger wave, because that will happen a lot. Wave is like a digression factory. A blip is a single little bubble, like the one Kelsey is freaking out in above before her untimely demise.

This step may take time, because right now Wave is painfully slow. That kind of slow where each letter lags as you type it. Sometimes it isn’t like this, but often it is. That’s because it’s in beta, kids. (That or it it sucks and will suck forever.) The slow typing is silly when you can type in gchat at normal speed. The slowness might be the first thing you notice.

The second thing you will notice is that YOU CAN SEE OTHER PEOPLE TYPING IN REAL TIME. That means if you type by hunting and pecking like me, you will be deeply horrified by this and that horror will result in immediate misspellings, which anyone looking at the wave can see in real time. Presumably, in the future we can turn this feature off, but right now the “draft” button is greyed out. Unnecessary? Weird? Yeah. Here’s what we thought.

Also, within a blip not only can someone else see what you type, but you both can edit the blip at the same time. I have no idea what the use of this is.

Good point! If you aren’t logged into Wave you have no way (yet) of figuring out if you have new waves. That sucks.

This is super annoying. The spacebar supposedly takes you to new waves and cycles through them, but it’s pretty buggy at the moment. Maybe eventually posts you have already seen will get greyed out or something. As it stands, I think you have to click each one to mark it as “read” which is unreasonably annoying.

This is a good point, and also a fine example of a chihuahua in a snorkel. Wave is a more organic way to have a large conversation with a lot of people. Things are (or will be) layed out in a natural way. Responses are nested within each other, so little sub-conversations (wavelets, remember?) can form without bogging everything else down.

However, much skepticism remains:

For the record, I added the gadget in response to the second question (not the first!), and voted accordingly.

Oh yeah, the yes/no/maybe thing is called a gadget. There are more gadgets for other stuff, like games! Everyone loves games. You can add some gadgets from a menu above your wave. You can also put in google maps (and pinpoint locations, areas, etc!) or embedded video and images. I really like this feature.

When you are adding an image or video, you can search from within the wave. That means if you click the G+ symbol at the top of your wave and go to add an image, a little box pops up within your wave and lets you conduct a search. From there you can embed gadgets, links, video & maps.

Best Feature Yet: This rocks! You don’t have to tab out, which takes up a lot of time normally, just in chatting and emailing. And it feels very natural and works remarkably well. Also, to embed pictures and such you can click and drag them from your desktop or computer and drop them into a wave. If you use the Chrome browser, this is already enabled. If you don’t you need to install a little addon called Gears. The drag and drop and the pop up menu are both sweet. Google, I see where you are going- I like it.

It makes file sharing to a lot of diffferent people at once WAY easier than attaching to emails or battling multiple adult friend finder ads on megaupload or paying for a file sharing service like dropbox. At Autostraddle.com, we use Zoho Projects as our “virtual office” and previously (before my time) used “Basecamp” (but left because Basecamp had no calendar, didn’t enable multiple people to work on a document at once, and either no chat or very-buggy-chat) We’re hoping that Google Wave might one day do for us what both of those services apparently cannot.

Here I embed a picture of Sara Tegan Quin in Wave, because naturally that is the first image search that sprung to mind. Check out that pop up menu! Hawt!

Okay, I found a picture I liked (I liked all of them) and here it is, in my wave, in all of its glory!

In the meantime, we have some Wave invites to give out, so if you’d like a shot at breaking Wave too, comment below!