Today is the most important day to ever happen in the history of the music since Britney & Madonna kissed on the MTV VMAs because today Tegan & Sara’s brand new album SAINTHOOD comes out. You know, the one you’ve been listening to via MySpace, causing your ex-friends to wonder why you’re suddenly on myspace all the time again. I can’t wait to buy it and not have to see that effin’ Twilight ad every time the music stops!

So put on your little emo t-shirt and hop skippity jump to the record store to get your copy. Crystal & Emily have already reviewed Sainthood overall and reviewed Sainthood track-by-track and offered you a chance to win a copy. You have until October 31st to do so!

Furthermore, Katrina and Crystal each took a turn interviewing our New BFF Tegan Quin in Tegan Quin of Tegan & Sara: The Autostraddle Interview(s).

The girls at saraandtegan [dot] ca [Autostraddle Trivia: “dot ca” is where Internicaine Katrina and Intern Emily Choo of Autostraddle met each other! Isn’t the internet MAGIC?] want to celebrate the release of Sainthood by making #sainthood a trending topic on twitter tomorrow. Why? Well, WHY THE F*CK NOT!

Emily: Hey! Something new: I love Sara’s lyrics. The weirder, the better. Initially I thought this was another collaboration song because Sara uses a lot of backing vocals and I thought the lower voice was Tegan. Regardless, this is still a good song. Does the guitar make anyone think of the Like O, Like H demo? Um.. so.. I think ‘Wrists’ is about a relationship.. JK.

Maybe it’s about Sara having to carry more than her weight in a relationship (I don’t what this means, I don’t know how to have ‘relationships’ but I hear of this thing called ‘balance’ and there might be a lack of it here). She says “I carry weight like a shadow” which I’m assuming is the other person, and then says “so put me next to the window, put me next to the light” which would make the shadow disappear. She also says, “Could be this way with almost just anybody.” Is her partner easily replaced? Only Sara will know. And whomever may be sleeping outside her window.

Crystal: Thank God for the internet, without it I would have no idea what Sara is singing in either of these bonus tracks. That’s the thing about Sara’s songs though, isn’t it. You hear the lyrics and instinctively think ‘no, that can’t be right!’ but then they are right, when you hear, “don’t judge a book by the size of its wrist” then that is exactly what she means, no matter what that means. This is a good track, I like it because it’s a little different, unexpected. Those of you who were hoping these acoustic tracks would be similar to fan favourites like ‘Call It Off’ and ‘Fix You Up’ could potentially be a little disappointed, but that should clear right up before the song is over. 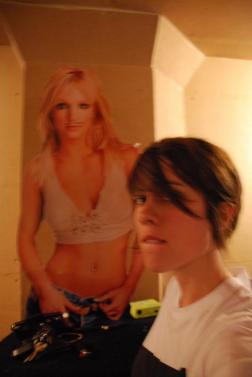 Emily: I really like this song. It’s dreamy, and I agree with Crystal, it sounds like a lullaby. Unlike Crystal, however, I never even thought of smoking. I think it’s because my opinion was tainted by this article and now I’m convinced it’s about Britney Spears. Also there was a picture on their myspace once with the caption ‘Britney, it’s Sara, bitch’. Clearly that was foreshadowing for this song. Other than that, I really love the line “let them say what they will, ’cause they will anyhow”. SO CATCHY/profound.

Crystal: I bought this song for $1.69 on iTunes and it was totally worth it. It’s sounds like a dark lullaby, one that makes me want to smoke weed and then take a very long nap. Although I’m not certain that lighting up is a direct reference to smoking, I feel like it’s a metaphor for not worrying rather than an actual instruction that kids everywhere should toke up. I could be wrong. But generally speaking, Sara’s a fan of the metaphor, isn’t she. I’ve noticed that. If Tegan & Sara ever decide to take on more side projects then Sara should maybe start a band with Live frontman Eddie Kowalczyk, they would make such amazing metaphors together.

It Was Midnight [Tegan]

Emily: I have to admit it: I’m not really impressed with It Was Midnight. I think it sounds like a radio pop song or Miley Cyrus (I expect people will now TP my house on halloween for these blasphemous comments). When I hear “don’t run away” my mind wanders and I start singing “Change Your Mind” by the All-American Rejects, and that’s not a good comparison. Well, maybe it is for the 15 year old me. Anyways, good things about this track: I really dig the drums and guitar. Um, that’s it. Sorry, Tegan.

Crystal: This is my favourite bonus track. I see where Emily is coming from, sure. It doesn’t sound like the Tegan & Sara I’ve been listening to lately but that’s fine, I enjoy that the T train has mixed it up I mean she’s just bein’ Miley. And it’s fast and only two-minutes long, which is perfect for my attention span. You know what really like in a recording? When you can hear faint squeaks of the guitarist changing chords. Hat tip, Tegan.

Also, this week wraps up your entry period for the Tegan & Sara: Sainthood giveaway, so be sure to do that STAT.

Here’s a bunch of photos of your favorite twins, from the 90s ’til the ’09. What cuties!

And if you haven’t seen it yet, here’s the music video for “Hell.”