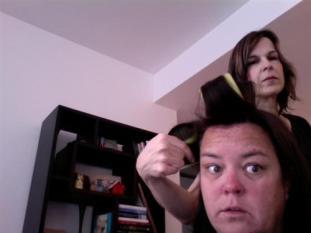 ROSIE: Let’s just get this out here — we are generally a pro-Rosie O’Donnell lesbian website. We don’t agree with everything she says or does, but we think she’s funny, we admire her bravery to speak out on unpopular points of view and most of all we respect the heaps of charity work she does. She’s a responsible citizen, and we salute her for that

So Rosie was on Howard Stern’s Sirius Radio Show! I know! For a whole 90 minutes! Wanna listen?

What did she say? Well, I personally really related to & appreciated the first 20 minutes or so where she talks about the psychological impact of losing a parent at a young age on children. For those of you who aren’t psychotic depressives, perhaps you’ll find the rest of it slightly “funnier”!

The LA Times: Rosie O’Donnell thinks Angelina Jolie hit on her. Can you spell DELUSIONAL?. Well, we all know I’m not a good “speller,” but I am a good reader, and I don’t see that information in this quote:

“She gave me her phone number…. We talked on the phone two or three times, but that was that,” she told Howard. “There was a tentative plan to have dinner that never came through,” she said. “I was a little afraid of her. She’s scary in a sexual kind of way. I have dreams about her a lot still.”

Yes, women as sexy as Angelina are scary, because they are so sexy! It’s a girl thing you wouldn’t understand. Probs Angie wanted to talk about how to bring Annie to all the starving childrens of the world.

The only part we care about in the LA Times piece (we actually love the LA Times usually) is this, as it’s MEGA IMPORTANT information and also it’s funny, see, Rosie is making fun of herself! So you don’t even need to do it for her:

“[Kelli and I] have come to a point where we are seeing [if] what will make everyone happiest is maybe to not live together, but continue to parent. We have different styles of living. I’m very messy. She’s very not.”

The Newser: Rosie: I Almost Dated Angelina. An almost-dinner does not a relationship make, Shane would break The Newser‘s heart for sure. 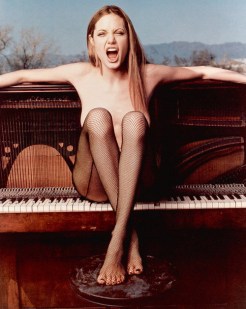 The Examiner: Rosie O’Donnell basically calls Oprah emotionally gay. What does that even mean? I’m distracted by all the qualifiers.

The Insider asks Is Rosie O’Donnell a hypocrite? (for saying she wasn’t going to talk about her relationship with Kelli and then going ahead and talking about her relationship with Kelli). A flip-flopper maybe, but when I’m done looking up “Delusional” in the dictionary, I can pass it over to The Insider and they can check out the meaning of “hypocrite.”

Anyhow, we’d like to direct you to Queerty, who covers our favorite topic and the only one worth mentioning in the context of a Howard Stern Interview: “Kelli and I had a lot of issues and sex wasn’t one of them.” Queerty notes: “This is, in fact, great to hear. Because while bigots will use Rosie’s split as evidence why gay relationships are unstable, we can throw this one back in their faces: well at least we’re having sex!

Her new show starts next week on Sirius XM.

SAINTHOOD: Hey, members of the Church of Tegan and Sara, listen up, it’s Christmas. Have you tweeted #sainthood today yet? You should, because its’ a trending topic and needs to stay that way. 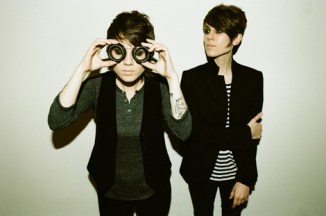 Four months after announcing the title of their latest album, those lovely Quin twins are releasing Sainthood today! If you’re one of the T&S faithful and held out ’til the actual release date (or if you just love to hear from us), check out Tegan & Sara’s Sainthood: B-Side Track Reviews, Massive Photo Gallery & #Sainthood, Autostraddle’s Track-by-Track Review of the album and our Interview with Tegan Quin!

HOLLYWOOD CLOSET:A few weeks ago you may recall an article from The LA Weekly on The Secret Lives of Queer Leading Men and how Howard Bragman helps actors tell the truth. Deadline Hollywood has put together a follow-up piece, About Hollywood’s Coming Out PR Guru. The most salient point here is that only one “leading man” needs to come out to change the whole world … who’s it gonna be? We theorized on this last time we brought up this article, and someone yelled at me, so I will just say that it might rhyme with Shawn Lavota. MAYBE!! Could just be Dicky Darton.

AMELIA BEDILIA: Girls just wanna have fun a strong female protagonist. Why did Amelia tank in the box office? Not because we’re not compelled by a female lead, but because…it wasn’t a good movie. (@newser)

LADY GAGA: President Gaga to resign? Calling herself a “very traditional Italian girl from New York,” Gaga said in an interview that she would be willing to quit music to take care of her mother and sister, should her father opt not to get cardiovascular surgery. (@lady gaga)

THREE RIVERS: The Examiner ranked the top 5 underdog shows on TV, and lesbian favorite (kind of?) Three Rivers came in at number five with “Most Potential.” Can you spell Delusional?