I love Molly Ostertag, both as a creator of comics and as a friend. It’s been really wonderful and satisfying to watch her career as she’s grown from the artist of a black and white webcomic to the artist of that same comic but now in color to the author and illustrator of her own graphic novel, The Witch Boy. This all-ages graphic novel tells the story of Aster, a young boy from a magical clan, where all the boys become shapeshifters and the women become witches. Aster, however, wants to be a witch, and he has witchy talents where he lacks shifting ones. Aster’s family and friends don’t want him to follow interests toward “feminine” things and want him to just stick to traditions. When his friends start disappearing, however, his unique personality and talents might be the only thing that can save them. 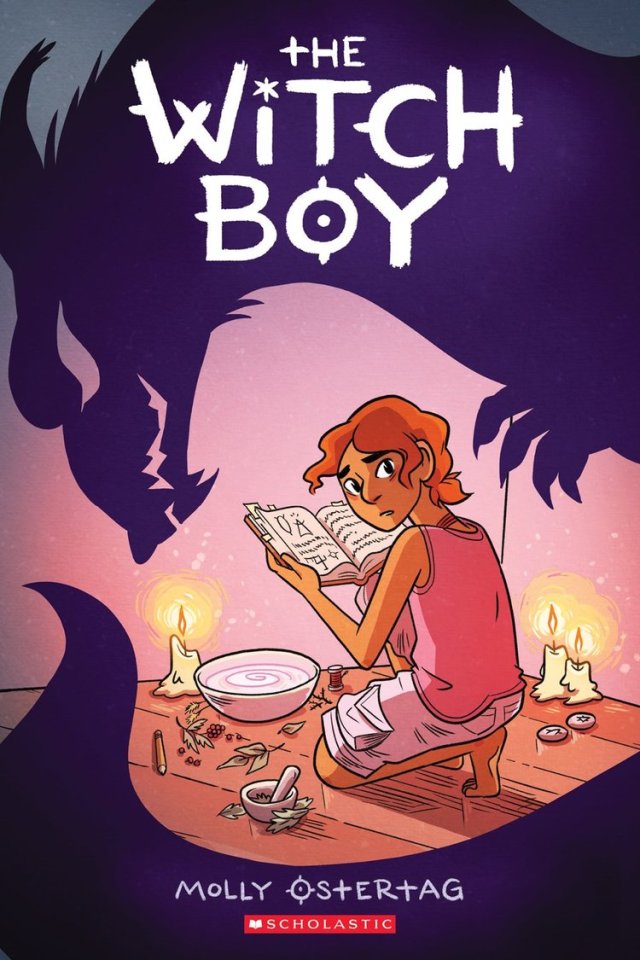 The book sends a strong message about how people should be able to follow their own hearts and not be confined by the rules of gender expectations. Aster just wants to be himself, he’s not trying to cause trouble or be rebellious at all. That’s just what naturally happens when society has strict rules for who can be and can do what. While the other boys are roughhousing and shifting, excited to get dirty and violent, Aster wants to study and learn and spend time with the girls. He doesn’t fit in, and his society’s rules about magic only reinforce that feeling in him. However, he’s not alone, he makes a new friend, a non-magical girl named Charlie, who also doesn’t fit in with society’s strict gender rules, and his family may not be so strict on those roles as he thought. 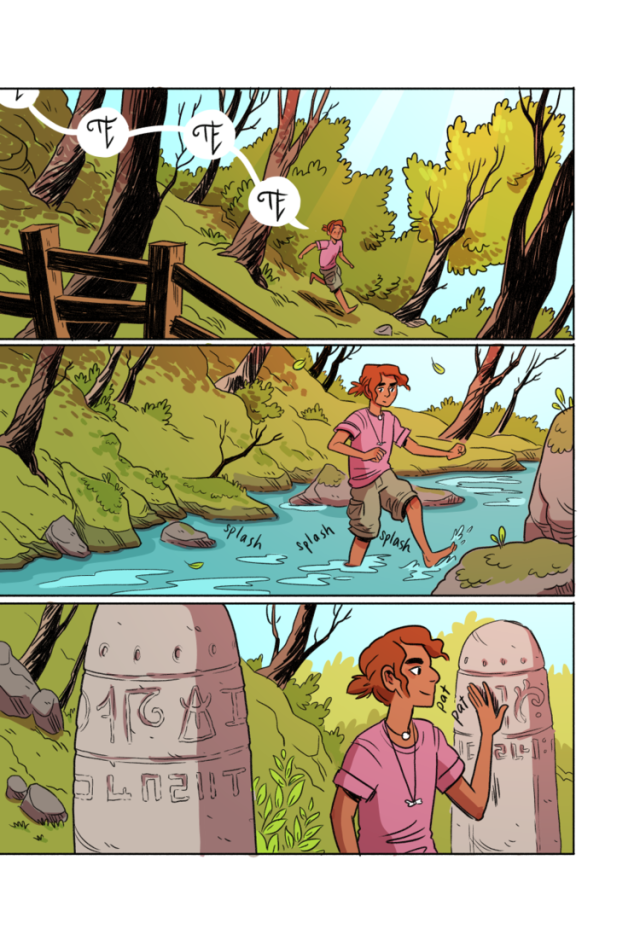 This book is especially timely, as it does a lot to combat patriarchal assumptions of what manhood should be and how it should relate to femininity. Men are finally being called out on the way they treat women and the way they attack women, and so many of the “apologies” we’re seeing from these outed predators are weak excuses dripping with privilege and masculinity. Perhaps if there were more boys like Aster, the culture of assault and sexual harassment and rape that is so pervasive would come to an end much sooner. This is a great book for any young boy to read to see that he doesn’t have to buy in to the toxic parts of masculinity that society offers. 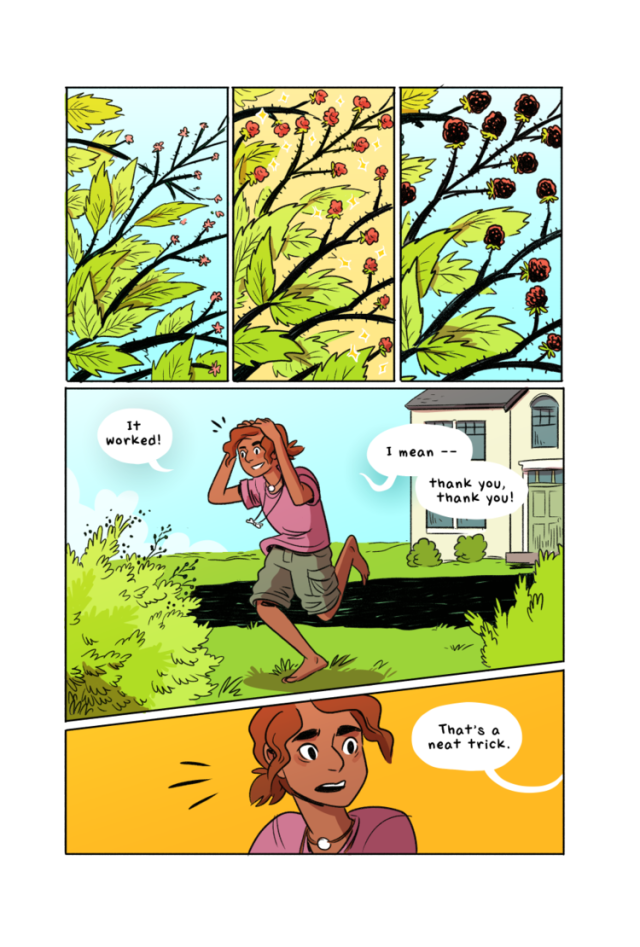 For me, the real shining piece of this book is Ostertag’s art. She’s really developed a wonderful style that’s perfect for an all-ages fantasy book like this. Her characters all stand apart from each other and have tons of personality that helps you to really see who their character is. Aster, for example, wears a lot of purples and necklaces and tank tops and sweaters and he has longer hair in a ponytail that definitely helps to accentuate his softer, more sensitive personality and interest in feminine things. Ostertag is also great at drawing creatures that look scary, but not too disturbing for younger readers. I love the way she’s illustrated this world of magic, it’s colorful and fascinating and always fun to look at. I really love the way this book looks. 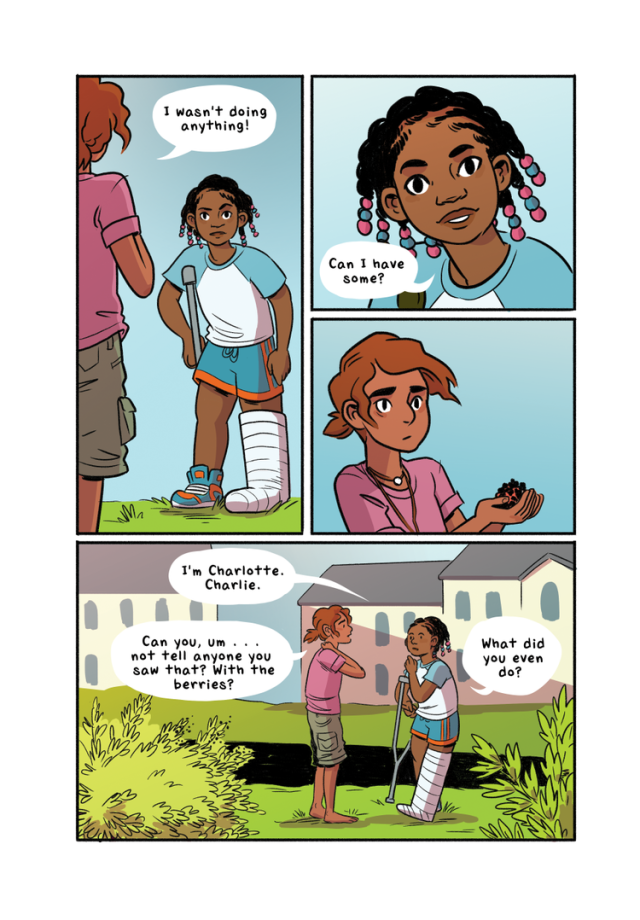 Ostertag is really a shining talent, and she’s without a doubt one of my favorite artists in all of comics. The Witch Boy shows that she has a ton of skill and potential and will continue to be a leader in the world of comics for a long time to come. I’m excited for the future of comics that includes voices like hers that focus on softness and friendship over power and violence. Books like The Witch Boy and creators like Molly Ostertag are here to create a kinder, more tender world to replace the broken one we have right now.

Batwoman Vol 1 The Many Arms of Death TP