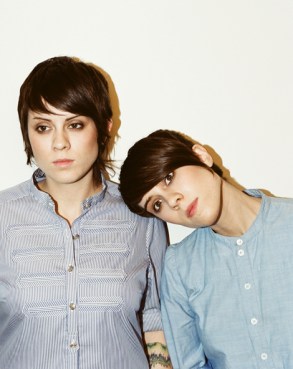 A few weeks ago we were lucky enough to persuade the good people at Warner to hook us up with an advance copy of Tegan & Sara’s new album Sainthood, and our favorite lesbian twins have been on high rotation in the virtual Autostraddle music office ever since. Not being the kind of website that likes to hold out, Intern Emily and I have decided to process our many feelings about this album and give you a glimpse into the very near future.

First a brief Crystal PSA: As you’ve probably heard, as of yesterday, some asshat has leaked Sainthood. I know some of you may feel like you’ve been waiting a lifetime for this album, but please fight the urge to download it early. Or if you already have, be a champ and pre-order it. I’m going to save you the lecture on the impact that illegal downloads and pre-release leaks have on your favourite artists. So just be aware that Tegan & Sara are going to stream the album on October 20, and that’s only a short wait. Ask yourself: “What Would Tegan & Sara Do?”

But back to the review. We come from two different places, Emily and I. She’s has an intimate knowledge of this band that allows her to do remarkable things like identify a Tegan song from a Sara song after only hearing a bar from 2oo yards away. I cannot do this. I enjoy Tegan & Sara enough to own all of their albums, however I still don’t understand some of The Con and I probably never will. So by combining our opinions, we hope to deliver a well-rounded review.

But before we begin, a few special announcements:

1. Autostraddle is giving away 10 copies of Sainthood. Want one? Visit our competition page to win.

2. Remember when I said we don’t hold out? Only partly true. All I can say is that we’re bringing you something special over the next few days. What could it be?! The suspense! 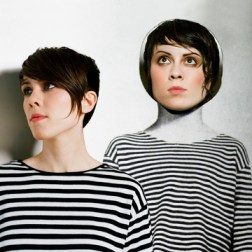 
“Would you take a straight and narrow critical look at me?” questions Sara Quin, in the opening line of the long-awaited sixth studio album, Sainthood. It’s a classic encapsulation of everything we relate to about Tegan & Sara — humility regardless of success and a kind of venerability and self-awareness that reminds us of well … us. They’re perceptive to their fans’ desires, and their fans desire a specific strand of a simultaneously neurotic yet hopeful willingness to be looked at. Tegan & Sara have developed an incredibly loyal fan base, especially in the lesbian community, and this is due to both their really good music and their really genuine & relatable personalities.

After a decade of recording, Tegan & Sara still stand firm in their approach: lyrical nostalgia and pack-a-punch choruses driven by edgy harmonies, propulsive beats, choppy guitar riffs and healthy serves of rhythmic repetition. But that’s not to say that this album is The Con, repackaged. For one, those piano-led ballads and slower acoustic tracks are gone, now replaced with up tempo synth pop grooves that just beg you to tap your feet and sing along.

These girls have challenged themselves, and it’s paid off.

Produced by Death Cab‘s Chris Walla (The Con) and The New Pornographers‘ Howard Redekopp (So Jealous), Sainthood sounds created from larger, slightly more indulgent studio ambitions; thicker textures, pulsating synths and inspired arrangements can be found in tracks that are considerably more produced without being over-crafted. I could throw many many more superlatives at you, but what I want to tell you above all else is that these girls have challenged themselves, and it’s paid off. For us, too. They’ve worked hard so that we don’t have to. They’ve also affirmed once again what they’ve been brilliant at from the beginning – to evolve without losing the urgent pop-laden hooks and emotion-fueled lyrics that made many of you fall for them in the first place.

“One thing I find about Tegan and Sara songs is that, on the surface, they’re easy to write off as simple or repetitive. If you listen to Tegan and Sara as background music you will never be able to fully appreciate them. Writing this review forced me to listen closely to each song and I rediscovered what I, and probably all of you, already know: Tegan and Sara are so fucking good.” – Intern Emily 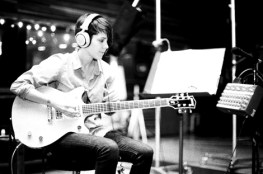 There’s something fundamentally more mature about this record. For one, there’s that Sainthood theme. The title and concept — a hat tip to the prolific Leonard Cohen and his ballad ‘Came So Far for Beauty’ — is best explained by the band themselves: “Inspired by emotional longing and the quiet actions we hope may be noticed by the objects of our affection, Sainthood is about obsession with romantic ideals. We practice our sainthood in the hope that we will be rewarded with adoration.”

The result? A collection of love songs. Love that’s been lost, found, enjoyed, forgotten, unrequited, desired... onstage at the Rifflandia festival last month, Tegan acknowledged that even the songs that are not about love are metaphors for love.

Sainthood was hyped to be the first time we’d hear Tegan & Sara’s songwriting powers combine – however only one co-written track, Paperback Head, made it to the track list. It’s a good track, however I enjoy their individual contributions far more. One of this band’s strengths is their ability to offer up two individual sounds and styles keeps their record fresh, giving their fans a healthy divide that we know makes for the best Tegan & Sara forum fodder. We feel free to play favourites, and so most of us do. For the record, I prefer Tegan’s songs. Emily, on the other hand, favours Sara’s. 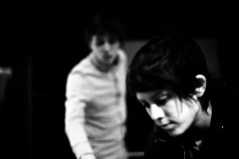 You may have noticed that I’ve avoided writing specifically about each Sainthood track. This is because once the album has streamed online, super fan Intern Emily is going to come back to this page and break this album down track-by-track for you. So make sure you check back here after October 21st and join in the discussion.