LINDSAY LOHAN: Do you know who Ellen Von Unwerth is? You should, ’cause she’s responsible for 50% of your most favorite photos ever — especially the lesbionic ones, like the smokin’ hot Jenny Shimizu shoot immortalized in her book Couples. Even though we promised ourselves not to make another Lindsay Lohan headline this week, we could not resist drawing attention to this match made in heaven, for this month’s Style magazine. Here’s the shoot and the interview (thanks to lindsay lohan online):

The story, called Car Crash Couture, observes: “The first thing you notice is how tiny [Lindsay Lohan] is, then what a large bosom she has. Her pale skin has been sprayed the colour of a ginger-snap biscuit and the lines etched into her freckled forehead make her look at least 10 years older than she is.” The interview is above in the gallery but also it is here. 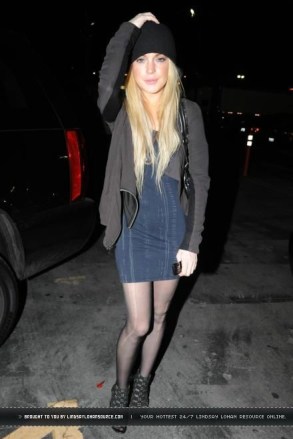 E! Online reports that “according to the New York Post, not only has onetime singer Lindsay Lohan been dropped by Casablanca Records, it has also been revealed that her high-profile (and widely panned) fashion gig for Ungaro is a freebie. They also claim the free clothes mentioned in the Style article were totally not free at all.

Meanwhile, The New York Daily News has declared that Lindsay Lohan is addicted to shoes. Okey-doke.

Samantha will undoubtedly be here soon to rescue her from the abyss as she seems to be doing JUST FINE. (@timesonline)

AFTERELLEN: Sarah Warn’s latest ‘Visibility Matters” reflects on the last seven years of lesbian & bisexual women in entertainment … with a tone of finality ’cause SARAH WARN IS TAKING THE GOLDFISH. (@afterellen)

GAGA: Lady Gaga’s new single, “Bad Romance,” from Fame Monster is on iTunes now! Um, and by that they mean “in the UK.” (@ohnotheydidnt)

TEGAN & SARA: We got Tegan & Sara’s music video for “HELL” back!

90210: Mandy Musgrave, who so gloriously played Ashley in South of Nowhere, will be returning to her lesbian roots on 90210. Maybe she’ll be Rumer’s girlfriend! We love typecasting! (@twitter)

LARAMIE: The stars came out for a 10th anniversary production of The Laramie Project: 10 Years Later, including Zach Quinto, Johnny Galecki and Helen Shaver. Our BFF Haviland went and met Judy Shepard and said it was all very inspiring.

“You’ve just got to be real and open with people, I don’t know how else to be. People knew what I was about, and god bless em for getting behind me.”

JEZEBEL: Barbie Doll Versions Of Joan Jett, Debbie Harry, And Cyndi Lauper Arriving In December – What I wouldn’t do for one of those. (@jezebel)

DOLLHOUSE: Interview with Dichen Lachman from Dollhouse. She’s not Eliza Dushku, but we’ll take it. (@latimes)

LIP SERVICE: On Lip Service Lip Service and Gay TV in general: The article looks at recent controversy from British portrayals of gays in media and includes quotes from Julie Burchill, who created Sugar Rush, a kickcass lesbian show that got canceled. Someone in the article says: “In the past, British TV has been really bad at gay stereotypes. There’s a need to make sure that characters have a bigger role than being gay,” she says. “Good drama avoids stereotypes and clichés.” (@independent)