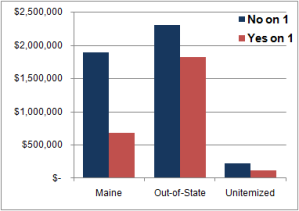 “Most of No on 1’s advantage is based on its substantial edge in fundraising from within the state of Maine.”

With the vote in Maine only a week or so away, both sides are debating the issue on air. When asked about Yes on 1’s relentless insistence that marriage equality would corrupt schools and churches and recruit children, Mary Bonauto, civil rights project director at the Boston-based Gay & Lesbian Advocates & Defenders and a consultant to No on 1/Protect Maine Equality, says that “the schools issue is a distraction.” Edge Boston summarizes her argument: “The statute doesn’t require schools to teach about same-sex couples’ sexuality, but educators should acknowledge equality. Kids come from all sorts of different families. Schools want to make sure they all are safe and respected.”

Autostraddle Wonders: See, you’d think the “Yes on 1” people would’ve noticed by now that YOU CAN’T ESCAPE THE GAYS. Kids will find out that they exist. But knowing that something is suitable for premium cable television is forbidden in your classroom is a dangerous message to send, and it’s one that reinforces the fear, shame & otherness which contributes to alarmingly high suicide and depression rates amongst gay teens as well as a lack of productive outlets for confusing sexual feelings.

Oh. Whoops! That was logic we were using just then, and admitting that homosexuality isn’t a problem your church can fix.

Andrew Sullivan for The Atlantic in August 2009:

In fact, a great deal of this symbolism has to do with gay kids more than adults. If you are part of a family and your society tells you at an early age that you can have no family, no spouse and no integration into the world alongside your brothers and sisters in the future as an adult, that’s a brutal psychic wound that leads to all sorts of subsequent problems and pathologies.

Money is pouring in from all sides, and per ushe the anti-equality camp has plenty coming in from the outside, like Focus On The Family Donating Nearly $100,000 To Maine Gay Marriage Ban Movement.

The Maine anti-equality warriors have taken to the newspapers, telling their citizens in Maine Residents Should Vote “Yes” on Question 1 that Proposition 1 isn’t about equality (b/c everything is allegedly equal in civil unions, which Maine already has) and it’s not about discrimination either, it’s “about forcing or imposing the gay/lesbian community’s will and morality on people who believe it contradicts their morality. And once it has the power of law behind it, it will eventually foster things like forcing ministers, priests, rabbis, etc., to officiate at these “weddings,” or their churches/synagogues lose their tax status and worse.” Oh Lord. Why are churches getting government funding to begin with? If you want to be independent from the government w/r/t your religious beliefs, then you can’t take the government’s money. Let’s not get all AIGey up in here.

AND Governor Baldacci points out that he opposed the measure initially until he learned that civil unions were not equal to civil marriage.

Matt Foreman argues that our calm & rational counter-arguments to Anti-Equality Maine’s ridiculous “teh gays will steal your children” ads aren’t gonna do it this time: when it comes to marriage, ads cannot do it – they must be matched with face-to-face conversations with voters.

Have you seen Phillip yet? You should. It will make your heart burst and you’ll want to send it to your parents:

If you doubt the extent to which this law will affect you, this piece from HuffPo will change your mind. In ‘Save for Retirement Week’ Rings Hollow for Gay and Lesbian Couples, Naomi G. Goldberg and Michael Steinberger point out that because marriage isn’t recognized under federal law, same-sex couples are often unable to provide for themselves after retirement. When a straight spouse dies, the balance of their 401K can be transferred without a tax bill and consequently at age 70.5, the spouse can begin taking money from this retirement account. The same-sex spouse will lose nearly half of every amount over $3.5 million due to the estate tax. Those with large estates will find same-sex spouses paying estate taxes that straight spouses are entirely exempt from.

Another interesting read from Truth Dig:

HATE CRIMES: The Matthew Shepard and James Byrd Jr Hate Crimes Prevention Act was attached to a $680-billion measure outlining the Pentagon’s budget, which includes $130 billion for ongoing military operations in Iraq and Afghanistan. This clever packaging enabled the Hate Crimes act to be passed by making it seem okay for Republicans and more conservative democrats to vote it through without taking a definitive stance on violence against lesbian, gay, bisexual and transgender people. In War is a Hate Crime, Chris Hedges argues that violence against people in Afghanistan and Iraq is also wrong and “in the bizarre culture of identity politics, there are no alliances among the oppressed.”

The brutality of Matthew Shepard’s killers, who beat him to death for being gay, is a product of a culture that glorifies violence and sadism. It is the product of a militarized culture … [which] attacks all that is culturally defined as the feminine, including love, gentleness, compassion and acceptance of difference.

To that end, we can only argue that Hate Crime Law or no, it’s likely the additional spending would have made it through Congress either way. Regardless, his point is excellent and valid. We do need to address the source of this violent culture that glorifies a specific sort of masculinity and power.