Hello, sunshines. I’m so glad you’re here today because I’m getting a little tired of the rain we’ve been having all week. Not because I don’t like rain (I do), but because it means I have to leave an hour early to get to work on time because Ohians freak out at the slightest drizzle. This week, Brittani recapped Two Broke Girls, and Lizz had the Televisionary caption contest. Carolyn made roasted pears, I baked a cake, and Riese ate things with peanut butter. We’ve got a teaser for the next episode of Unicorn Plan-It, Katrina has a kit for girls on the run, and Carmen has a playlist for finally dating someone. In consumerism news, Taylor breaks down the new iPhone 4S and in anti-consumerism news, Riese has a list of 10 damn the man documentaries. If you’re looking for halloween costume ideas, Lizz has got you covered with Glee and Black Swan-ish crafting projects. Let’s head over to the ASS group of the week!

Hey you, girl on the run! This group is for you. You can meet up with other Autostraddlers while you’re travelling. Maybe they’ll even let you borrow their towel.

On You Still Have Time for a (Gay) Halloween Costume: The Black Swan: 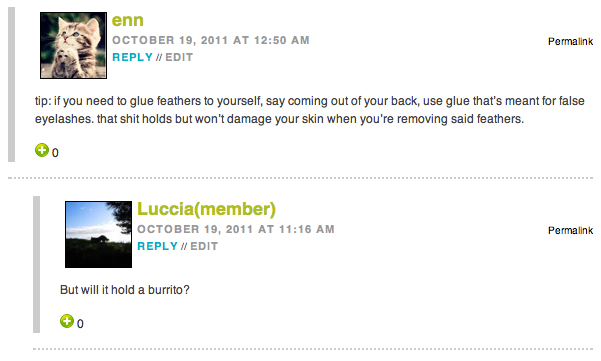 On Fox News Claims the Comedy World Finally Freeing Itself of Unsexy Women:

The Touche Award to Cree: “I wanted to say that I thought this article was funny, but the picture of the writer was too small for me to determine if she is hot or not. Now I don’t know what to think.”

The My Misspent Youth Award to Leni: 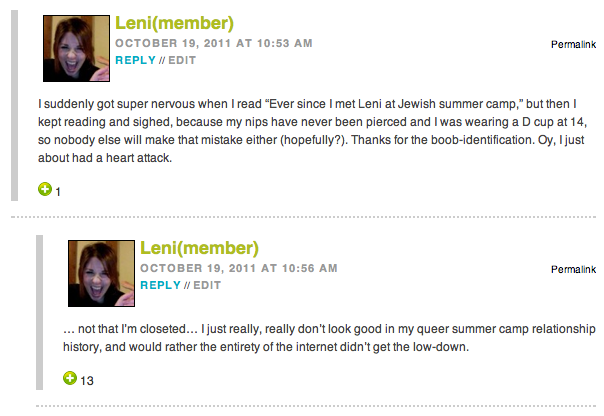 On High Heels Are In For Men, Maybe:

The Wherefore Art Thou Romeo Award to bookbound: “I can see the fashion headlines now: “Codpieces Back in Style, Just in Time for Fall””

On Also. Also. Also: Gay Allies Get a Week, Thirteen Gets a Girlfriend, Etc.:

The Why So SeriousAward to Sarah and Sin: 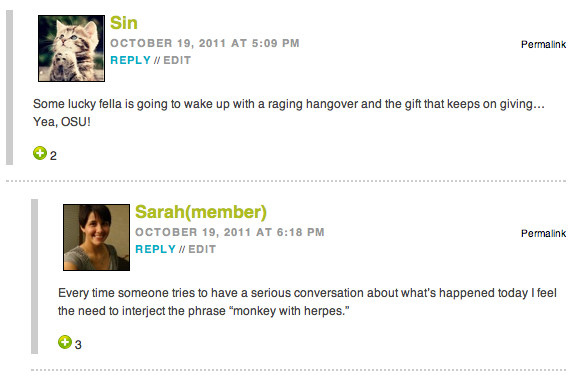 On 10 Things That Taste Good With Peanut Butter:

The Spooning Award to DeAnne: “Oh, and you forgot one important thing peanut butter tastes good with: A SPOON.”

On 60 Percent of Hetero Women Are Attracted to Other Women, Duh:

The Androgyny Confounds Award to Sally: “Only one logical conclusion to draw from these unusually high numbers. The researcher asking the hetero women about their same-sex feelings…