Hi! Have you ever had sex or made out with or kissed or cuddled suggestively in your underpants with a straight girl? Me too! Why? Because 60 percent of heterosexual women are attracted to other women, according to Shane, your pants and a new study from Boise State University.

The study interviewed 484 heterosexual women. 60 percent said they were sexually attracted to other women, 45 percent had kissed another woman and 50 percent had same-sex sexual fantasies.

Elizabeth Morgan, the study’s cohort leader, has concluded that “women, due to their friendlier nature, are often more openly affectionate with others of the same-sex.’ Also:

“Women are encouraged to be emotionally close to each other. That provides an opportunity for intimacy and romantic feelings to develop.”

Mmmk. But seriously, why are 60 percent of heterosexual women attracted to other women? Because women look good. See:

These numbers have changed over time (in 1994, scientists found only 7.5% of ALL women reporting same-sex desire) and every time a new survey like this comes out, it turns out that more and more girls want to ride the hobby horse with you all the way around the Niagara Falls area, over the river and through the woods.

In 2010, OKCupid found that amongst its users, 1 in 3 straight women had hooked up with another woman, and of those who haven’t, 1 in 4 would like to. However the most recent survey from the Centers for Disease Control and Prevention found only 13% of all women had participated in same-sex behavior — and that includes the lesbians, bisexuals and queers. So now you can add all of the numbers up and divide them by the chance that Kristen Stewart likes girls and make a game plan for Friday night. 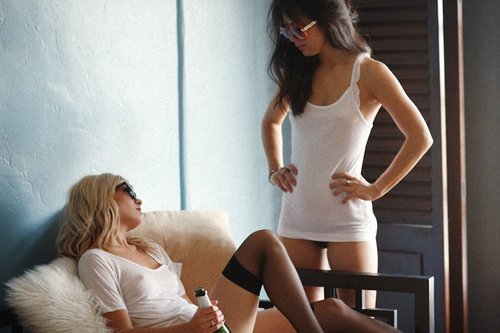 In a 2007 interview with feminist author Jennifer Baumgardner, who used to date Amy Ray, Baumgardner spoke on this generational shift:

Do you think ladies dating ladies is actually more common now, or is it just more visible?
It’s more common and obviously more visible. Visibility gives people the idea to do things. Acting on a desire is based on having opportunities. You know in the movie version of The Hours when, out of nowhere, the ’40s housewife kisses her neighbor? Stuff like that did happen, but there was no framework to put it in. I think now there are a lot of entry points to kissing a girl.

It’s almost become a rite of passage.
My mom would be shocked to learn that any of her friends had kissed a girl. I don’t know if it’s just that they wouldn’t own up to it, but I’ve grilled her and she hasn’t done it. I can’t think of any of my own friends who haven’t. It is still shocking if you thought you were straight to suddenly be in love with a woman, but I think it makes a difference that you’re not as likely to be rejected by your family, or fired, or beaten up.

Go find a straight girl to make out with but don’t get emotionally involved. Maybe you can help her discover her latent bisexuality or homosexuality or otherwise queeriosity, and then she can come fight about labels on the internet.  Is queeriosity a word? It should be.