What happens when you take your daughter college shopping to your alma mater? I’m not sure because I didn’t visit the University of Iowa. Good thing Modern Family has me covered for when I go visit Chicago Medical. 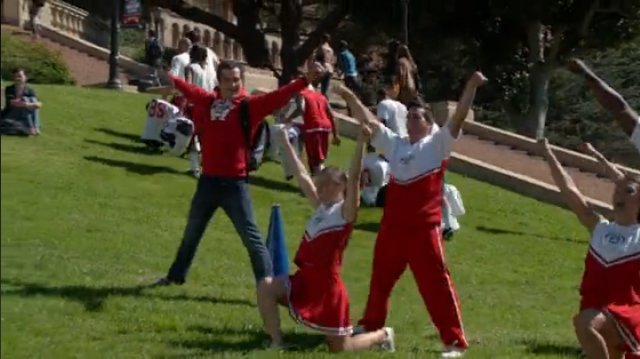 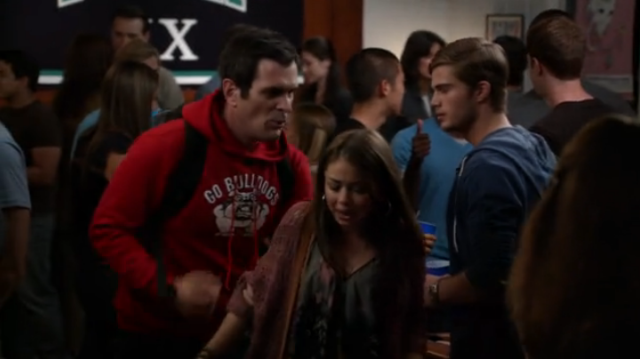 YEAH RIGHT, SURE YOU WERE DRINKING GINGER ALE

Haley : Dad I’m having a nice time!
Phil: With this clown? And by the way it’s a little cliche to pick someone who looks just like your dad. I got your number Pi CHi. I know you.
Haley : Yeah, you do. This is Ben Flord. He’s in my class, he’s visiting too.
Ben: You were my T-ball coach. My dad’s your doctor? He’s right over there.

Phew. Glad that was explained to me. The more you know!

So. With Phil and Haley looking at schools and Luke and Alex at sleepovers what does Claire do? Well, she doesn’t sit around her apartment watching sitcoms, eating miso and rice soup and marveling over the joys of boxed wine. No, she has a night out on the town with Gays! Guys, Gays! Gays!! There are actual real live Gays for her to party with! That’s right, to party with delicious chicken pot pie style! 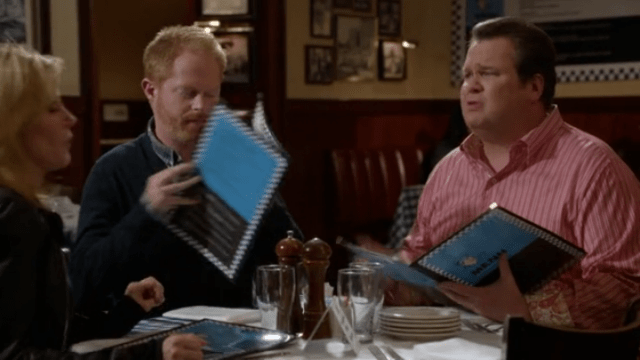 SERIOUSLY. NO JOKE THE CHICKEN POT PIE IS TO DIE FOR.

I know what you’re thinking, this isn’t exactly the fun night out with Gays Gays Gays that Claire was looking for. So obviously she talks them into something with a little more pizzazz. Like a hot new boutique opening… because that’s a real thing? Well, what’s important is that the Gays are here to be catty and FABULOUS! Insert serious comment about the stereotyping of gay men as fashionista gal-pals. 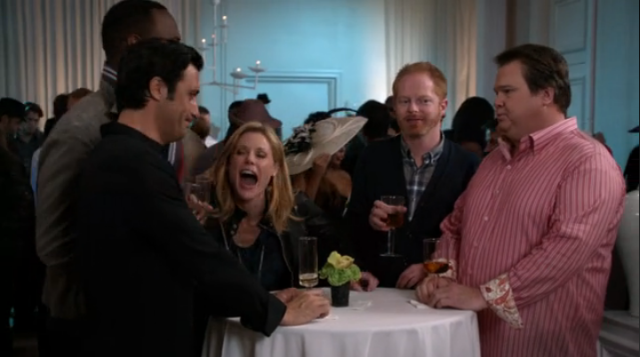 So, because they’re actually just middle age working parents, Cam and Mitchell ride off in to the sunset (accidentally taking someone else’s Prius) leaving Claire with a spicy hot Gay Gay Gay man. Unfortunately, Cam/Mitchell/Claire had to learn the hard fact of life that many of us already know. Just because someone looks gay and acts gay and is hanging out with a bunch of gay people does not, as it turns out, make them gay. Bummer– straight dude’s trying to hit it. 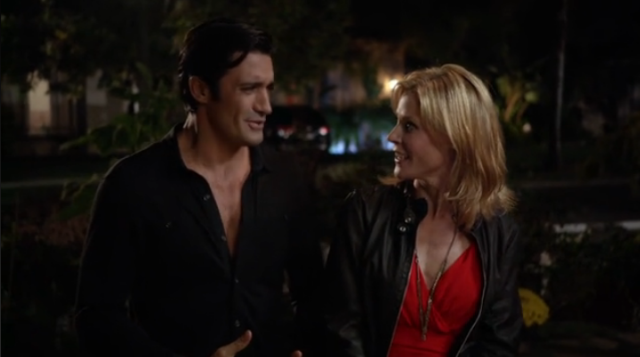 Also Manny bought a stretching kit to make him taller but since he hid it from his folks they thought he was jerking off. Ouch. 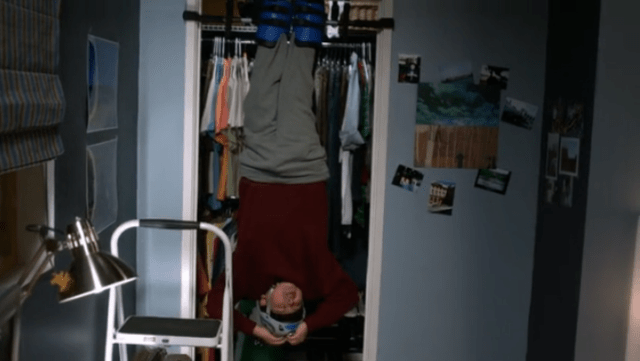 “Secrets and Limos”
by Brittani

This week Jane decides to make vision boards when Penny misses out on a raise at work, Brad enlists the help of Max to impress his new boss, and Dave has a new girlfriend. Alex continues to carry on in the background and add hilarious lines intermittently.

Alex: I’m just picking up a normal amount of take out for a normal person and I didn’t eat half in the cab and half in my bed.

Brad’s new boss always has food on his face. It’s disgusting and distracting the entire episode. When Max drops Brad off at work in the limo, Mr. Forristal notices the limo as he is a classic car enthusiast. This opens the door for Max to cozy up to the boss.

When Penny’s board hasn’t produced results after an excruciating 22 hour wait, Jane tries to jumpstart the process since she might be the Universe. Penny realizes Jane is meddling with the natural order so she adds a few sections to her vision board. 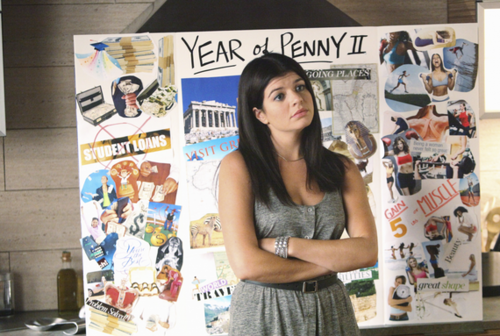 The group convinces Dave to bring his new girl around. Turns out, they aren’t that welcoming to new girlfriends (or people outside of the group in general) and have been especially harsh to women Dave has introduced in the past. As luck would have it, Molly is the worst. 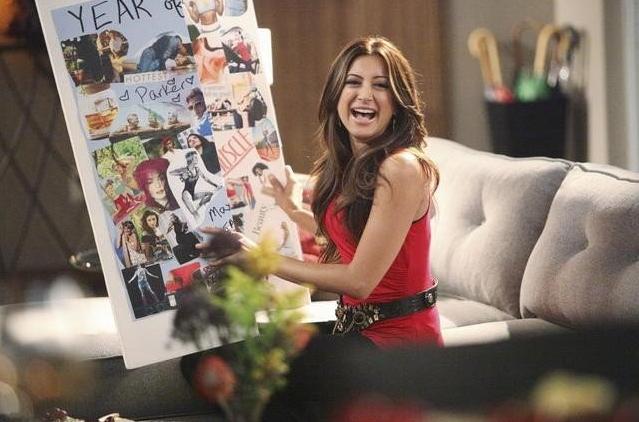 "My mom made one of these in her 'Divorced Over 50' group. I used to call it her desperation board."

Max finally does what Brad can’t manage and tells Mr. Forristal about his face situation. Instead of insulted, he’s relieved. He’s tired of all the ‘yes men’ around the office. When he needs his wife picked up from the airport Max is the one that gets a break.

Max: Yeah, no problem.
Forristal: No, no, no. I meant Brad.
Brad: Huh?
Forristal: Max just got his burrito.
Brad: Sure thing. I have a Master’s degree. Absolutely.

While Brad is gone, Max misreads a moment which gets him kicked out of the office. Not before he finds out the boss loves Brad though. 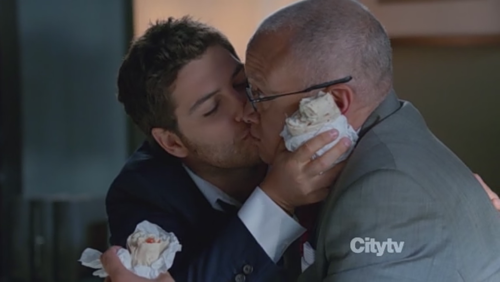 Penny confronts Jane about the vision board and Jane chills on being the Universe. We find out Penny blew off the hot bartender because she thought Jane was responsible for his advances.

Penny: I’m also visualizing a romantic old-fashioned gentleman. The kind of guy who will buy you flowers and dinner, and look at you during sex.

Penny reconnects with him but then decides not to see him again after he admits to also having a vision board.