Once upon a time, I made an OkCupid profile for a job I had. I didn’t really put any effort into it. I don’t even know what it said as I’ve deleted it completely. I’ve never been a person that is looking to date or even looking to hook up. Probably because I’ve never lived somewhere that things coming as they may wasn’t enough to satisfy my lesbionic interaction quota. So as a relative outsider to the OkCupid game, I am proposing a possibly new approach to this online dating game to those willing to eschew norms and take a chance.

It seems to me that most profiles aren’t hits because they’re either so non-offensive and not engaging that no one is called to action OR so specific that very few people will bother. No one wants to hear more about how you “love reading” because that exact phrasing is usually a sign that you don’t actually love reading and it’s too broad for anyone to care. On the other hand, if you get so obscure that you’re talking about how much you love Carl Muller, you’ll probably have more success finding girls in grad school which is like a really expensive OkCupid anyway.

With OKC, the hook is your username. A lot of people seem to have mastered this art much better than I have. In a lot of cases, it seemed they just put two random ass things together until it sounded vaguely insane and fairly intriguing. In other instances, users play off of real life people or fictional characters. My name is NotHilarious which doesn’t exactly fit the pattern but a few others that I think would do the job are SnarkyPretzel, GreenEggsandClam, and SaneMcCutcheon. Also anything that sounds like a bad indie band is probs nailing it. 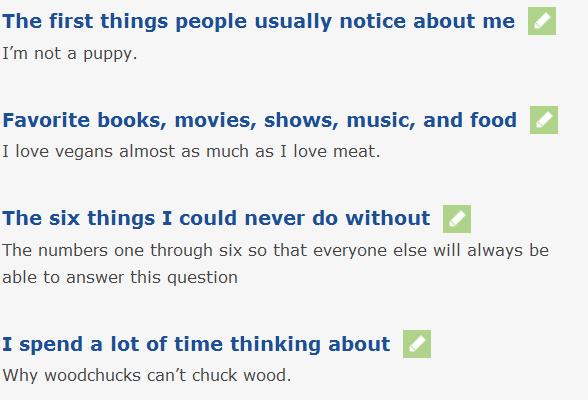 Subtlety makes people pay attention. Even though you might be the most earnest person in the world and every word of your profile may be true, everyone assumes you’re putting on airs. And if you’re not putting them on, maybe you should be. When everyone is trying to put their best foot forward, people tend not to take things at face value. You have to keep in mind that quick shallow judgments will be made about you. The online dating profile is a constant battle of what it says versus what it means.

Example 1: I spend most nights listening to jazz with a hot cup of tea in my hands and my eyes on the stars.

Example 2: Currently I’m spending most of my free time raising money for a 5K to benefit the Blind Kittens of Africa Coalition.

The main takeaway is that you’re probably weird and unique. Make that weirdness fun and palatable, not off-putting and showy. Pick a tone and stick to it. You can’t be a quirky but lovable jackass in one question and then talking about how your grandmother inspires you daily in the next. Your profile should keep a reader entertained and guessing. Make them have to ask for the information that other people give away. It’s part of the plan that step three brings you right back to step one. They’re intrigued and they want to know more and the lack of factual information is the hook that will get them to send that message. For a lot of people that first step is the hardest. They can’t get past what to say other than, “hi.” If you take this approach they can easily just ask, “Hey, what the fuck is it that you actually do?” and you can go from there.

Obvi your profile doesn’t have to be as mysterious or barebones as I mine because that might seem sketch and some people think trying to be witty is as pretentious as being unknowingly pretentious, but if you follow those three basic guidelines, you will increase the likelihood of at least appearing witty and intriguing even if you actually aren’t. I know I’m not.