Welcome back to You Still Have Time for a (Gay) Halloween Costume, where I try to convince you that you still have time to pull together a steller (gay) costume. Halloween/costumes can be extremely expensive, so my goal is to keep every costume as cheap as possible. Sometimes there will be more or less expensive routes. You can go super intense with any costume or really basic– I’ll give you options along the way. Last time we covered THE BLACK SWAN. Did you read it? Not interested? Okay, well, today: Gleek out! (Part 1) 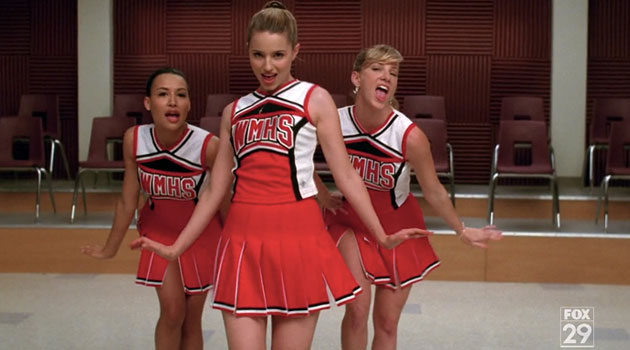 If you want to go as Brittany, Santana or old school Quinn, you’re going to need a Cheerios costume. Full disclosure, you can buy official Glee Cheerios uniform costumes. There’s also one at Hot Topic. They cost from $30-$50, but depending on what you already have, you might be able to make one for cheaper. Besides, where’s the fun in a store bought costume?

If you already have a red cheerleading uniform at home or you can find one cheaply at a thrift store, a few wicked easy alterations will have you reporting to Sue Sylvester in no time. If not, a matching (or near matching) red tank top and skirt should work just fine as well.

+A red cheerleading uniform (that you already have or purchased from a thrift store) or a matching red tank-top/T-shirt and skirt
+Black fabric of the same material as the uniform
+Iron on letters or black and red felt
+a roll of 3/4 inch black and white ribbon each. The soft kind not the birthday kind.
+Details

1. Look at the tank top of the uniform. There should be a general shape of color underneath the team name. Cut out a piece of black fabric the exact size and shape of this part of the uniform. If the letters aren’t inside a shape, then just cut out a shape like the one shown going from side seem to side seem.

2. If the letters on your uniform are letterman style iron on letter, try a few techniques to remove them.

3. Glue the black fabric right over the area where the name is and wait for it to dry. If the letters or previous fabric shows through, just glue another piece of black fabric on top.

4. Now you need your William McKinley High School WMHS letters! Iron-on letters can be pretty reasonably bought from craft stores, but sometimes they’re the wrong size so you might want to make your own. Using red and white felt, cut out the letters in white so that they fit just inside the letter area. Now, cut out red letters that are just slightly smaller.

6. Glue your ribbon to the area where your black fabric meets the rest of the uniform to cover up the edges. Also use the ribbon wherever else looks cool (around the sleeves, neckline or along the sides).

7. If your skirt doesn’t already have contrasting edging, use your black and white ribbon along the bottom of the skirt. Now put it all on!! 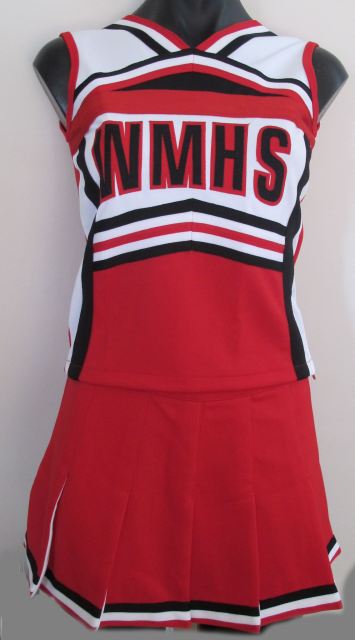 Every Cheerio needs white sneakers, white or red socks and some kick ass pom poms. If it’s cold, you can wear a white turtleneck underneath your tank-top. But that stuff’s boring and you already knew that. 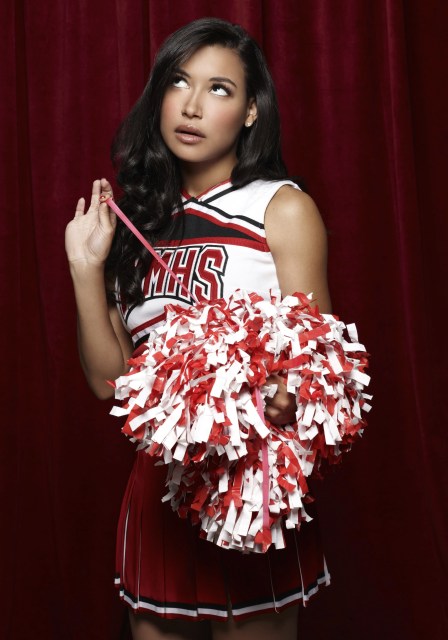 The most important way to distinguish which character you are is by hair. If you have the “right” hair color, just put your hair in to a pony tail. Your Santana or Quinn pony tail should be straight back without any bangs. For Brittany, you need some side bangs in the front. If you don’t have the hair color of the character you want to be, then the fun starts. You get to buy a wig!! The most important thing to remember about getting a wig is that you should absolutely not try to put it in a pony tail. It’ll get ruined. Instead, just try to get one that looks like the character’s hair when it’s down. I like these two for Britanna (who you’d obviously rather go as than Quinn).

On the off chance you do decide to go as Quinn, you should twist one side of your hair back and throw a cross necklace on. Also a fake baby bump would be a good move. 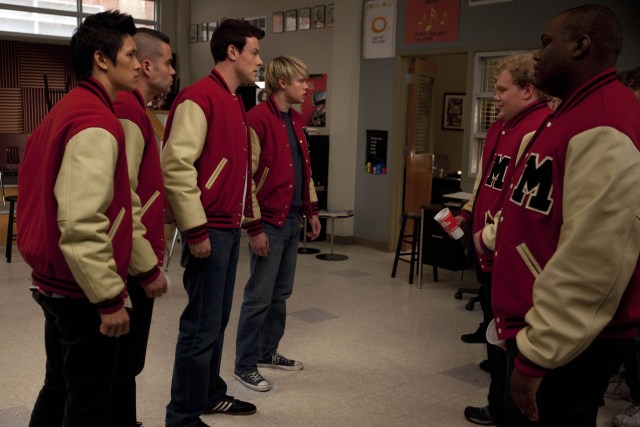 If your girlfriend is a particular Rachel Berry fan (or you just have a sweet mohawk) you might find yourself looking to dress up as Finn, Puck or Mike Chang. Or Trouty Mouth. Or Santana’s gay boyfriend. Or whoever.

The varsity jacket is really the only component of a WMHS football player costume. It should come as no surprise that, just like the cheerleading costume, you can get an official Glee varsity jacket. But why would you do that when you could just use your own?!?

If you don’t have one, no worries, they’re really in style and you can totally wear this one after the fact. If you want your jacket to have the genuine Glee “M” then just follow the instructions for the Cheerio’s costume letters (but just a M in the upper left area). Since varsity jackets are so in style, you can also sew instead of gluing the fabric/letter so that it won’t ruin your jacket for the future.

Of course you’re going to start with some jeans and sneakers. You can go really easy with this one and wear a white crew neck no matter what. If you want to make it a bit more specific, a green button up or swear over a green T-shirt with be very Mike Chang. Similarly, a navy striped sweater will scream Finn. But if you want to go Puck? You know what you have to do. A black T-shirt and a guitar are a start, but you gotta have the buzz-cut mohawk. 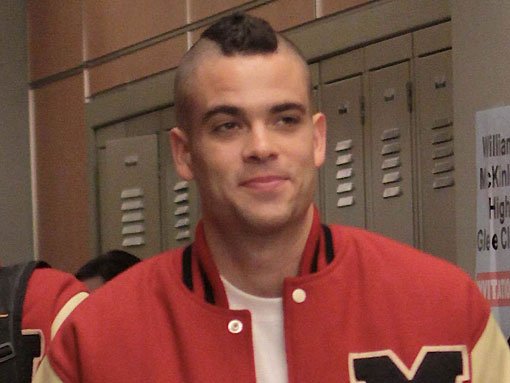 YOU GOTTA GO BALLS OUT FOR THIS ONE 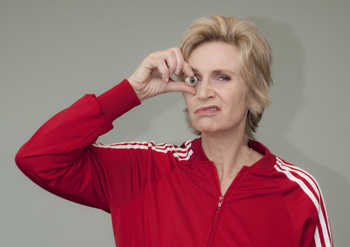 Sue Sylvester is by far the easiest and fastest Glee costume. Of course, you can buy the official costume, but seriously, you only need four things. You can do this one on your own. Promise. Just got buy a red (or really any color) track suit from the nearest second hand store. If you don’t have blonde short hair, pick up a wig. Go cheap with this one, it’s almost kind of better if it looks bad.

Then, the only other thing you need (besides sneakers I suppose) is a whistle. If you’ve seriously got your eye on the prize, you can even make a paper megaphone. See? I told you this was easy!

Put on some quick zombie make-up to be zombie Glee! 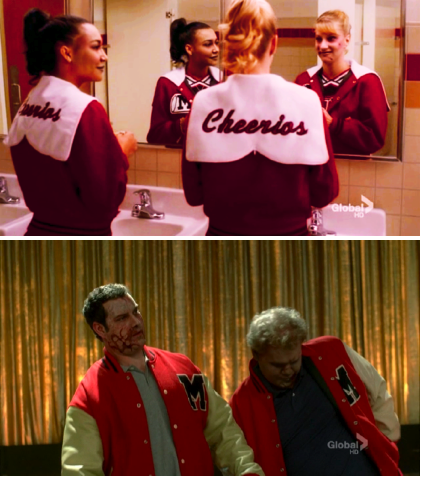 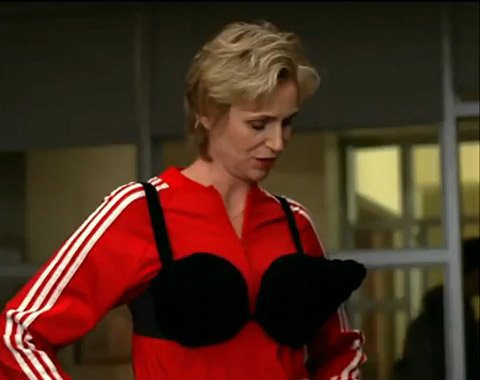 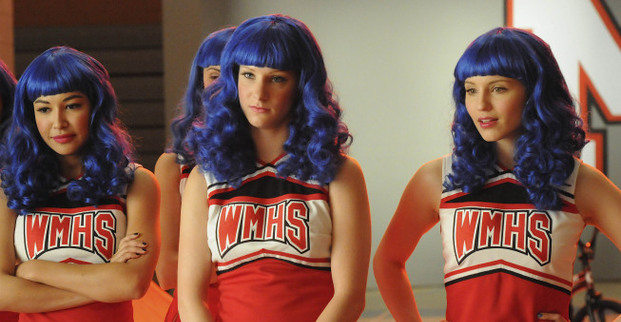 YOU MAKE ME FEEL LIKE IM LIVING A TEENAGE HALLOWEEN DREAM

Next time: Rachel Berry, Emma and More Santana and Brittany!