Hey. Are you having a good week? I know I am. Are you stuck inside an office staring longingly out a window at the sunshine? Well, stop looking at nature, and start looking at your computer. There is so much sun shinning out of these comments!

This week we had new music from The National and Bloc Party in Audiostraddle’s Weekly Fix, and Taylor questioned Microsoft’s intentions in the new Kin ad. Rachel, Sarah, and our guest baker, Abby, baked you a cake as fast as they could in Get Baked’s lemon feature. We interviewed hip hop artist Rasheeda and counted down the top five Zelda boss battles. Everyone was a babe in the The Official 2010 Autostraddle Hot 100, so we gave you lesbian safe sex 101 because we care.

On Christina Aguilera: Girls Are Pretty, Crazy, Fun, But Nothing Compares to Penis:

The True Life Award to Fit For A Femme : “True story: I was at a party the other night. Some girls were telling their coming out stories.
One chick was all, “I came out super recently to my mom, after making THE BIGGEST MISTAKE A LESBIAN CAN EVER MAKE, LIKE EVER,” and I was all, “ZOMG, did you take the last tampon? So rude!” and she was all, “NO, I FELL IN LOVE WITH A STRAIGHT GIRL, WAIL!”
That is all.”

On Lesbian Forced to Pay Back $80K ROTC Scholarship. But Shouldn’t Pride be Priceless?: 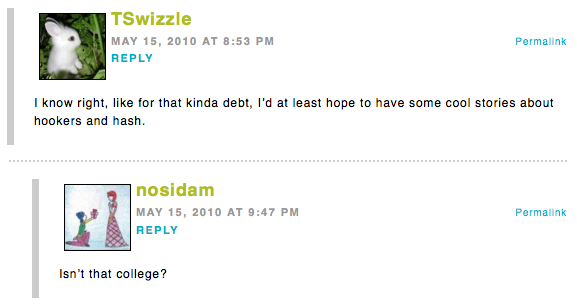 The Xtina Award For Beautiful Ladies [No Matter What They Say] to Fiona : “Dear all, you are beautiful. Fact.”

The Distracted By Hot Emilys Award to Sally : “Was anyone else so overwhelmed by the hotness that they failed to spot everyone was listed alphabetically?
I was about four pages in and thinking, fuck me, is every queer girl in the world called Emily?! And then it dawned on me.”

On Glee’s Got Bad Romance Live, More Madonna, and Not Enough Diversity:

That Is The Sound of 8 Million Lesbians Dying Award to Mo : “I was so upset by J. Beals kissing a man, but then I remembered that I am going to marry Tara Lynn. Now I feel much better. Thanks, AS!”

The Non Sequitur Award to BuzzFeed : 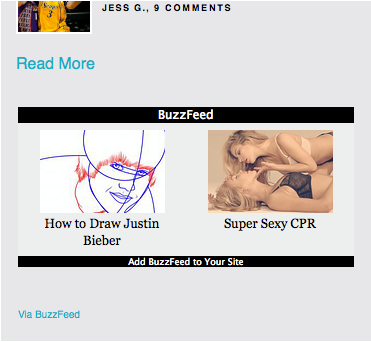 On Get Baked with Autostraddle: Lemons Edition:

The I Bet You’d Like To Lovingly Saran Wrap Other Things Award to the velvet underground: “real talk autostraddle – baked goods were how I realized i was a homo. stick with me here- It was my crush’s birthday and I, the kid who can burn cereal, pulled out all the stops and managed to bake glorious cookie cake from scratch- complete with icing and those cute baby star sprinkles. And as i awkwardly grinned and presented her with my lovingly saran wrapped confection, I realized that I would never, ever put in that kind of effort for a boy (not even break and bake). Anything that requires pre-heating an oven should be getting me one step closer to homosexy!!” 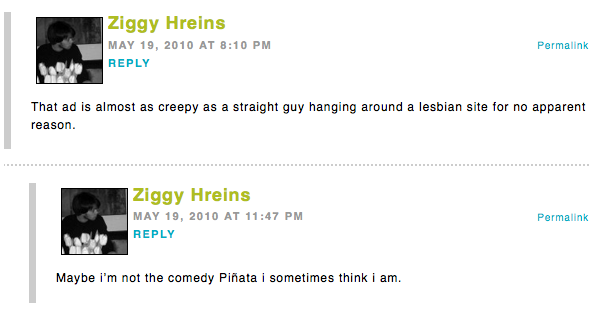 On Transpeople, Ewoks, Dolly Parton: It’s All The Same to Bill O’Reilly:

The Bro Award to Ash : “I think that the funniest part of the AE story is that they are sold out of cargo shorts”

The Constance is a Celesbian Award to brown bear: “Fun fact: Constance is living with a friend of mine; last week, I went to a party at said friend’s house, and Constance was there. We sat on the couch together.
It was magical.”

The bcw Award for bcw to bcw: “i bet they drink awesome shooters and listen to awesome music and sit around and soak up each other’s awesomeness.”