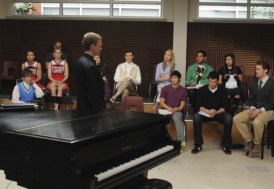 Last night on GLEE, a bunch of stuff happened, but most of it was about adults and Doogie Howser. There was also a lot of interesting stuff about the challenges Artie faces being in a wheelchair, and how it impacts his relationship and his desire to dance, which reminded me of Degrassi. We believe there was a storyline involving someone maybe or maybe not taking something away from Glee Club, like a budget or its members. Per ushe Sue Sylvester was involved, that tricky bitch, and three gay people successfully played straight ALL IN THE SAME EPISODE.

The best part besides Kevin’s mall flash mob which WAS FUCKING AWESOME was the Idina Menzel-Lea Michelle duet to I Dreamed a Dream. Did you know that Broadway’s Lea Michelle got her first big break as a precocious child in Les Mis and was also cast in the 2006 revival (which also starred our bff Haviland Stillwell), but had to bow out when Spring Awakening made it to Broadway? Probably you did know that. Now you REALLY know. Anyhoo, not enough Brittany.

Here’s the preview for next week’s GAGA EPISODE:

From the GLEE live tour, you’ll get a little glimpse into knowing who is singing what part on their recording of Bad Romance:

The Glee creators have confirmed there will be a second Madonna-themed episode. Last time, Madonna wasn’t aware that the ep was happening until it was ready to air, but she probably knows about this one. When asked if she was going to appear in the episode, a producer said: “I can’t say. But she’s sort of the muse of our show. She loves the show and has supported it. She gets that the show is about arts education and so she’s very supportive about that.” (@monstersandcritics)

Jezebel thinks Glee still needs to work on diversity: “What rubs me the wrong way is that those involved in the show are constantly patting themselves on the back for being the most progressive program on TV. Granted, the cast may be slightly more diverse than in the typical teen drama, and I can’t think of another series that features a teen in a wheelchair. But with pompous declarations that the show is “dedicated exclusively” to promoting tolerance, Murphy is setting the bar pretty high, which makes Glee’s shortcomings all the more apparent.” (@jezebel)

Some Facebookers have started a campaign to get a gay kiss on Modern Family, but Eric Stonestreet (who plays Cameron) and the producers have asked fans to chill out. Says creator Steven Levitan: Everything we’re doing, we feel like we’re doing for character reasons. There is an episode that addresses it next season that we had in the works anyway, so I think that it’ll all pass soon.”

Can we pause and talk about how much I love Modern Family? SO MUCH. This show is actually quite perfect, and New York Mag explains the winning formula: Be Funny, Biting, Sweet, Ironic, and Just This Short of Sappy. Then they break down the Starry Night episode and have the writers explain the decisions behind each scene. It’s kind of like a DVD director’s commentary, but in print!

The season finale is on tonight, so don’t miss that! Also I spent a half an hour today trying to figure out when Season 1 comes out on DVD — it’s unannounced, but probs in the fall like everything else unless there is a miracle, in case you were wondering. You can pre-order it on Amazon, though!

Oh look! Even more TV news. Blame this on New York Mag and their TV Rule Book issue, which we thoroughly enjoyed. Rule 7 applies to Rupaul’s Drag Race: Product endorsements aren’t going away, so you better work them: “The real surprise of the series, which has in its second season become the breakout hit of the tiny, gay-themed Logo cable network, is that it has managed to interweave a pointed and funny critique of the entire reality-competition genre into its own format. Anything that has ever struck you as slightly false on other shows becomes overtly, gloriously fraudulent on this one — an appropriate transformation for a show celebrating those who can pull off dishonesty with style.” (@nymag)

This is actually not about teevee, but Ellen Page is going to play a lesbian in a movie, and we think that means she must be one step closer to playing a lesbian in real life, right?

[Ellen Page] will be playing an adult lesbian auto mechanic in Freeheld… adapted from Cynthia Wade’s Oscar-winning short documentary of the same title… Page has been cast as Stacie Andre, the girlfriend of dying New Jersey police officer Laurel Hester. In addition to fighting cancer, Hester fought the county to get her pension benefits passed on to Stacie. Such privileges were of course reserved solely for (heterosexual) married couples, not (gay) domestic partners. The remake will be produced by acclaimed documentarian James D. Stern (Every Little Step) along with Erin Brockovich’s Michael Shamberg and Stacey Sher.

When Weeds returns this summer, it will feature a lesbian pot farmer played by Linda Hamilton. It’s not as great as Allison Janney coming back as a lesbian, but I’ll take it.

Check out the trailer for Jennifer Beals’ new show Ride-Along. She looks powerful and hot, so not too far from Bette Porter:

The Wachowskis are shopping around a script for a ‘hard-R’ Iraq War drama about a gay relationship between a US soldier and an Iraqi. (@slashfilm)

French Elle is putting plus-size model Tara Lynn on the cover. She’s taking the opportunity to spread a message of self-esteem and acceptance.