Google made a few teensy tweaks to its design, and naturally we all flipped our shit. Most noticeably, the logo lost its shading. 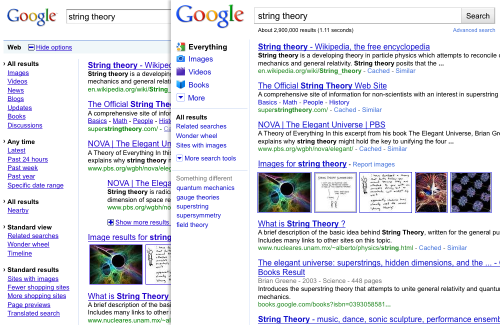 In the new design (featured above on the right), well, hardly anything’s different. There are tiny icons representing categories of search (blogs, news, etc) and things are cleaned up ever-so slightly.

Did the redesign make you weep? New can be scary.

PAY WHAT YOU CAN GAMES:

Hey, remember when Radiohead released In Rainbows and you could pay whatever you wanted for it so naturally you paid zero dollars and then felt fucking terrible about it to this day?

Well, Radiohead certainly has enough to get by, but the same can’t be said for probably any indie game developer ever. 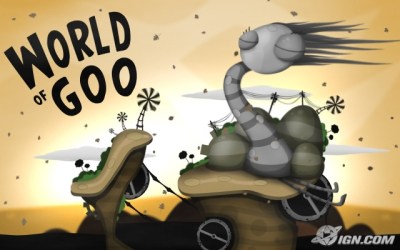 Check out this pack of indie games, called the “Humble Bundle.” It’s got the same pay what you can/will/feel like thing going on, you can score a bunch of games you might not have tried otherwise, including the critically acclaimed “World of Goo.” And in true indie spirit, you can choose what percentage of whatever you want to pay goes to the devs or to charity. Aw.

You’ve got three days to get in on the deal, and the Humble Indie Bundle is both PC & Mac friendly.

Maybe I’m just a total weirdo, but I love weird mind-bending stuff that kicks my imagination into overdrive. The “Ladybower Belmouth” is definitely one such thing. I’m not all too sure about what a belmouth is, but basically the Ladybower one is an architectural oddity, a drain-like construction in a lake (that presumably serves a practical purpose) that’s extremely mysterious by design. My curiosity is ever so piqued. 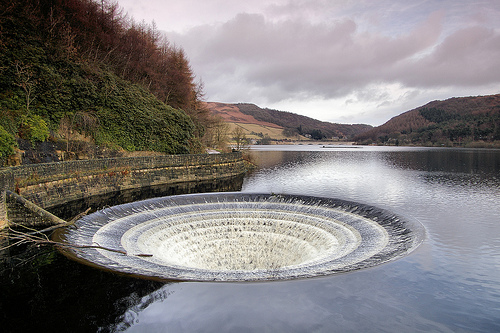 Sooner or later, either your nerves or your grip will fail while diminishing steps accumulate below preventing a vertical view. In short, as if you were performing a ritual, this structure will first make you walk in circles, then make you turn your back on the thing you fear, then give you a severe fright, and then deny you the answer to a question any bird could solve in a moment. When you do fall, you will hit the sides before hitting the bottom. Death with time to think about it arriving awaits anyone who peers too far into that hole.
The pretty fascinating scholarly paper analyzing the belmouth prompted me to reread The House of Leaves this week. Which is the utmost in exploring eerie architectural anomalies, even if the titular house is fictitious. Well, not eerie so much as pants-shittingly terrifying, I suppose. And you know, the book has like, literary merits and stuff too.

In light of some religious folk getting murderously pissed at a few pesky irreverent cartoonists, there’s going to be a cartoon holiday now where everybody draws the prophet Mohammed. Everybody who can, and like, wants to, that is. He seems kind of hard to draw.

“May 20th has now been designed ‘Everybody Draw Mohammed Day.’ There is power in numbers, and if you’re an artist, creator, cartoonist, or basically anyone who would like to exercise your right to free speech in a way that it is actively threatened, that would be the day to do it.” 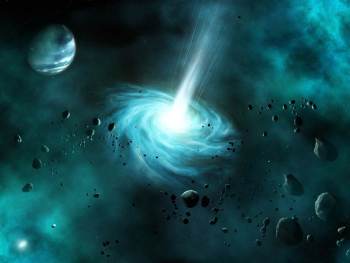 When Stephen Hawking says jump, you jump. That is, you jump the exact height specified by his meticulously rendered, impossibly complex series of equations. And you do it because he’s Stephen Fucking Hawking. So when Stephen Hawking tells us how to build a time machine, you BUILD THAT SHIT. What are you doing still standing here?! According to Hawking:

“If we want to travel into the future, we just need to go fast. Really fast. And I think the only way we’re ever likely to do that is by going into space. The fastest manned vehicle in history was Apollo 10. It reached 25,000mph. But to travel in time we’ll have to go more than 2,000 times faster. And to do that we’d need a much bigger ship, a truly enormous machine. The ship would have to be big enough to carry a huge amount of fuel, enough to accelerate it to nearly the speed of light. Getting to just beneath the cosmic speed limit would require six whole years at full power.

The initial acceleration would be gentle because the ship would be so big and heavy. But gradually it would pick up speed and soon would be covering massive distances. In one week it would have reached the outer planets. After two years it would reach half-light speed and be far outside our solar system. Two years later it would be travelling at 90 per cent of the speed of light. Around 30 trillion miles away from Earth, and four years after launch, the ship would begin to travel in time. For every hour of time on the ship, two would pass on Earth. A similar situation to the spaceship that orbited the massive black hole.

After another two years of full thrust the ship would reach its top speed, 99 per cent of the speed of light. At this speed, a single day on board is a whole year of Earth time. Our ship would be truly flying into the future.” 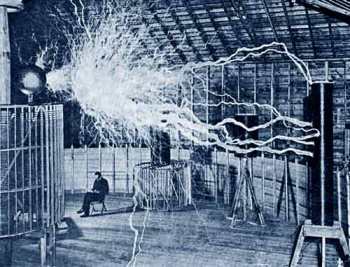 Not that I needed another reason to think that infamously crazy-like-a-fox electricity experimenter Nikola Tesla was the most badass scientist ever, but oh hey, sounds like he postulated the future existence of the cell phone– in 1909.

Also, he was so cool that David Bowie played him on screen in The Prestige, which is one of my all-time fave movies ever. FYI.

Maybe i’m hyper-sensitive, but it’s hard for me not to find the vast majority of articles about female gamers condescending. NPR’s little write up of moms who love “Bejeweled” isn’t much different– it basically makes it sound like women just love shiny things. Like diamonds! Surprise! Women are so funny like that.

Wanna watch speedster browser Google Chrome face off against other Fast Things, like lightning? How about a potato gun? I swear by Chrome– you should really give it a whirl if you haven’t. Something interesting is that the Chrome team specifies they used a MacBook Pro to make the video, but it’s running Windows of course. Jab!

MEME OF THE MOMENT:

I haven’t seen Paul Rudd in anything since Clueless, but it doesn’t matter. This video sums up everything I like about a good, solid viral vid. It needs no context whatsoever, it’s undeniably bizarre and I absolutely cannot stop watching it. Nor can I explain why it beckons me so.