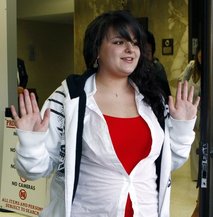 On the downside, this sucks that she had to do this, but on the upside, at last Constance McMillen can learn some shit in peace. The Boston Herald reports:

The lesbian teenager who sued her rural Mississippi school district over a ban of same-sex prom dates told The Associated Press on Thursday that she has transferred to a high school in the capital city to graduate.

Constance McMillen said she now attends a high school in Jackson, about 180 miles away from Itawamba Agricultural High School in north Mississippi. She wouldn’t say which school she attends, but she expects to graduate June 2.

“There was a lot of stuff going on at Itawamba. It was just really hard to do my homework, so I transferred to Jackson to get my diploma,” McMillen said. “There’s a large gay community there. All the teachers are very nice and very helpful.”

Harvey Milk Day was voted into existence last year by a Republican governor of all things, but it still won’t be celebrated on local high school campuses. The Kern High School District Board of Trustees in California voted 3-1 Wednesday to not observe Harvey Milk Day on May 22.

Perhaps the most frustrating part of this story is how much effort it took to have happen – the day was set to proceed on its own without anyone having to take any action, and probably without any real fanfare or actual observance, but a conservative trustee made the point of proposing a vote against it. The trustee in question was the Kern County chairman for Prop 8. Charming. At a special board meeting called on Wednesday, both supporters and opponents of the holiday showed up to share their feelings, with opponents arguing that he isn’t “a good role model for students,” and that we “celebrate his lifestyle, not his achievements.” Clearly these people have not seen MILK, the man’s lifestyle WAS achievement. He’s a role model for getting shit DONE, you know what I’m saying? This exchange in particular was interesting:

“I’m going to support the motion, because Sacramento sends their culture wars to us,” Vegas countered. “We didn’t ask them to send it to us, they sent it to us, we’re telling them, ‘No.'”

Isn’t it horrifying what a shock it is to see someone use the words “distraction” and “inappropriate” to talk about a homophobic measure instead of, say, a GSA?

Others, notably students instead of adults in administrative positions, argued that observance of the holiday was necessary:

“I ask you to allow the students of this district to go forward with their planned celebrations of civil rights hero, Harvey Milk,” Ariel Bustamante said. The student said she had experienced harassment and discrimination, and recognition of Milk would send a positive message. A policy to ban Milk celebrations would send the wrong message. “Voting for board member Mettler’s proposal will only send a message that this board wants to create safe and accepting schools for only those students that happen to be heterosexual or not transgender,” Bustamante said.

In the end, however, the motion passed, leaving us to wonder who is a good role model in a state whose governor starred in Stepbrothers, and leaving Bustamante lamenting that students don’t have “somebody in the school that they can look up to, and relate to, so that they feel safe on campuses.” (@bakersfieldnow)

We’ve reached the point of meta-commentary on Elena Kagan and her sexual orientation  – Glenn Greenwald at Slate says that the left’s obsession with Kagan’s sexuality is just as bad as the right’s. “Without realizing it, they’ve completely internalized one of the most pernicious myths long used to demand that gay people remain in the closet: namely, that to reveal one’s sexual orientation is to divulge one’s “sex life.” (@slate)

Montgomery College of Maryland will have an out African-American lesbian as its president starting this August. Dr. DeRionne Pollard has a three-year old son with her partner of 20 years, as well as 15 years of teaching on her resume. (@theadvocate)

The President of Portugal, Aníbal Cavaco Silva, has signed a law that gives same-sex couples marriage-like legal rights without using the word “marriage.” He [said] that, while he is opposed to gay “marriage,” he has no problem with the idea of giving special legal privileges to homosexual couples, without calling the union “matrimony.” He lamented that a consensus had not been reached to create civil unions in a manner similar to France, Germany, and other EU countries. (@lifesitenews)

Margaret Eby at Salon wrote a piece called In Defense of Women’s Colleges, and Jezebel had some feelings about it. “I’ve never attended a women’s college, but the piece reminded me of advice I’ve gotten several times in my life: that I should try to be a big fish in a small pond. Well-meaning people advised me thus when I was choosing colleges, and even when I was deciding where to live as an adult. I think the advice stemmed from the perception I was shy or anxious, and even though I am often anxious and I can be shy, I always bristled at the notion that I needed special coddling.” What do you think? If you’ve had any experience at women’s colleges, has it been positive for you? Why? (@salon) (@jezebel)

A ruling in Canada questions whether religious organizations have the right to discriminate – an employee of Christian Horizons was fired for her lesbian relationship, and her case against her employer has been through a series of appeals. “Heintz went to work for Christian Horizons in 1995, but five years later she came out as a lesbian, entered into a relationship with another woman–and was fired for doing so. Heintz took the matter to the Ontario Human Rights Tribunal, which found that Christian Horizons could not practice employment discrimination and ordered the group to pay a hefty fine. But on appeal, a higher court found that the earlier ruling was incorrect, at least in part; although the appeals court ruled that Heintz should have been able to keep her job, it also found that the lower court had not appreciated what it meant for Christian Horizons to be a faith-based charity.” (@edgeboston)