Tonight is the premiere of the fantastic and/or blasphemous premiere of Skins MTV/USA, which will take the original series from the UK to Baltimore and replace the gay guy with a lesbian. SOOOO we thought, as the two recappers of Skins for Autostraddle (yes we work harmoniously as a team, it’s lovely), that we’d take this opportunity to share with you our very most favorite scenes from the first four years of Skins UK.

Also, if you’re not following Skins FTW on Tumblr, you should be. We snagged some pics from there as well. That’s why we’re telling you to follow them. Because they have such snatchable photos.

Our Ten Favorite Skins Scenes From the UK Original 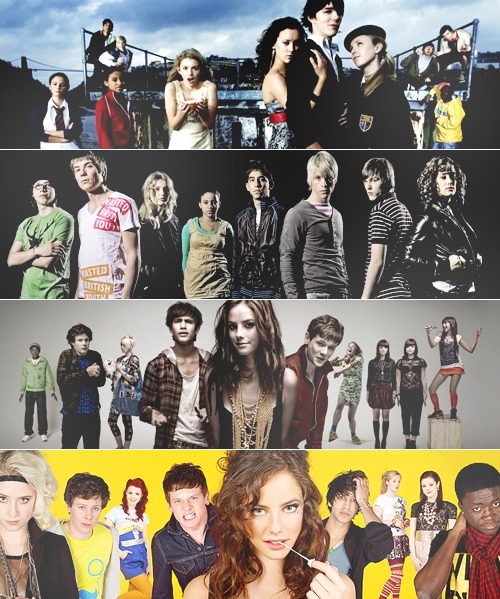 1. The Best Day Of Chris’ Life

In Skins Series 1 Chris has a lot going on. When his mother skips town and he turfed from his own house by squatters, Chris visits his father only to be reminded that his father thinks he’s a fuck up and doesn’t care that he’s homeless & broke. But despite all this, instead of whining about his shitty life Chris decides to connect with Jal by telling her about the best day of his life, how his deceased brother Peter once saved him from humiliation at cub scouts.

This scene captures everything I love about Chris, who’s my favorite Skins character to date. Here’s a kid struggled through most of his scripted life and, although he didn’t make life easy for himself, I admired his fighting spirit, the way that when shit got hard he looked on the bright side and kept getting back up. Well, until he didn’t. RIP.

2. The Worst Day Of Chris’ Life 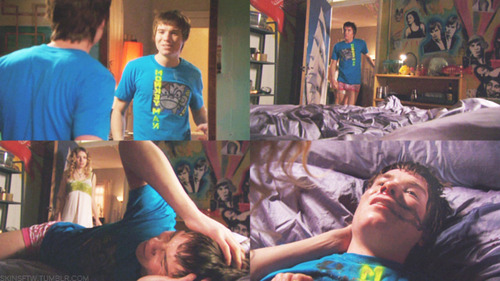 This is really the most important “Chris” scene because in it, Chris dies. He has a seizure in Cassie’s arms while trying to remember Jal’s name and it’s horribly, tragically sad. What I liked about this scene was the way it hit hard & fast, like a steel fist to the gut that came out of nowhere but not the ‘oh, Freddie just got murdered by the therapist’ kind of nowhere which is a place so fundamentally ridiculous and pointless that it can’t possibly be real.

Chris’ death felt real. It felt like it’s entirely possible that one moment you can be smoking weed on the couch with your friends and then the next, you’re dead. Just like that. It was ugly and brutal and unfair. It felt like the other shoe dropping even though I’m not completely sure when the first one hit.

Overall the Tony & Sid relationship was torturous to watch. I loathed its familiarity and  the feeling that I was giving Tony the benefit of the doubt when I probably shouldn’t have been. I spent most of the series in hope that he’d eventually prove that he was capable of showing compassion to someone other than Effy, and this scene felt like the reward. The beauty in it is that Tony finally shows Sid how much he loves and needs him by letting him go. He buys Sid the ticket to New York City and allows himself to be that guy who stands in the terminal and cries.

Naomi: “I don’t understand blowbacks, why can’t anybody just smoke the thing straight?”
Emily: “It’s fun. Have you tried it?”
Naomi: “No, but I’ve seen it and can tell it’s shit.
Emily: “Come on, anything once.”
Naomi: “Fuck it. Go ahead and disappoint me.”

Every scene I’ve selected for my top 5 so far has been sad, so let’s take a moment to appreciate that scene where Naomi and Emily drank vodka and smoked weed and had sex beside the lake. Thank you Skins, I mean really. Thank you for casting those two girls. Thank you for giving them the courage to finally get it on. Above all, thank you for teaching this new generation of young lesbians that doing blowbacks is the quickest way to get a girl to kiss you.

You can read more of our slightly depraved feelings about how hot this scene was here. 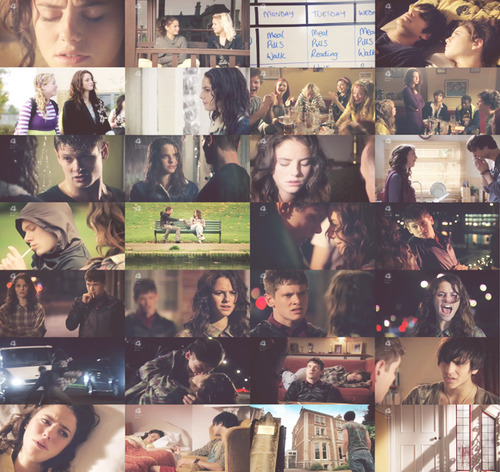 MY GOD it was so difficult to choose my favorite scene from that time in Series 4 when Effy gets high and loses her mind and almost loses her life. Last year Riese and I had a lot of feelings about it, specifically how sad and confusing and kinda sudden Effy’s sickness was and also how hilariously qualified we were to comment on it.

Given the time restraints that come with 8-episode seasons, I think the writers did a reasonable job at showing Effy’s fall from sanity and the huge impact it had on her loved ones. Notable attempts include Freddie and Effy huffing over the kitchen sink and lying in the meadow. But the scene that had the biggest impact didn’t feature Effy all – it was at the very end, post suicide attempt, when Freddie burns up Effy’s crazy collage and Cook steps out of the shadows to tell him that all he can do is push on. The love and fear and desperation in this scene SLAYS ME. 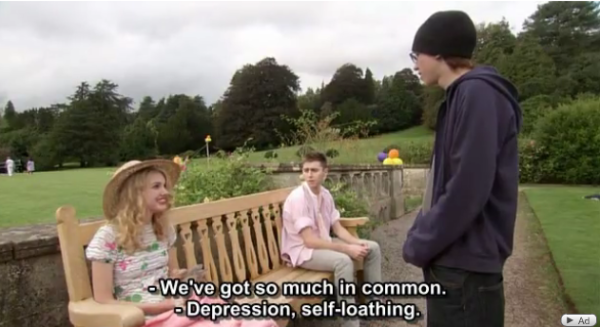 1. Naomi Has Loved Emily For So Long

The last episode of Skins upset me on about 45 levels, which I extrapolate on in detail here, but there was definitely a beam of lesbian sunshine beating its way through all those always-oddly saturated clouds —

Naomi: I loved you from the first time I saw you. I think I was 12. It took me three years to pluck up the courage to speak to you. And I was so scared of the way I felt, you know, loving a girl – and so I learned how to become a sarcastic bitch just to make it feel normal. I screwed guys to make it go away, but it didn’t work. When we got together, it scared the shit out of me because you were the one person who could ruin my life. I pushed you away and made you think that things were your fault, but really I was just terrified of pain. I screwed that girl Sophia to kind of spite you for having that hold on me, and I’m a total fucking coward because I got these tickets to Goa for us three months ago. But I couldn’t stand – I didn’t want to be a slave to the way I felt about you. Can you understand? You were trying to punish me back and it’s horrible, it’s so horrible because really I’d die for you. I love you. I love you so much it’s killing me.

It was a perfect scene; the dialogue digs underneath Naomi’s skin into her heart and the whole history of her life up until now. The holes are filled up, just like that, and sealed with a kiss — and it’s the first time we’ve really gotten a good conversation out of either of them regarding what it was like to grow up gay, or always feel different, or what happened back in their youth of stolen kisses.

So Magnolia! They pulled this shit off, and I appreciate that. Also, “Wild World” truly is that song you hear in your head when shit got crazy and now it’s quiet and you’re going from Point A to Point B and the journey is all. 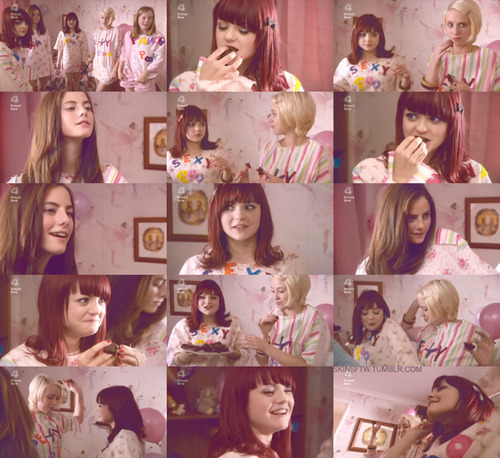 This scene really ‘explored the social dynamics’ between this set of male friends and also of female friends and it was f*cking hilarious. Also, I started watching S4 before the rest of Skins and I admit I didn’t really “get” Pandora or her place on the show. But in S3 she made me laugh like, 500 times.

4. Maxxie Comes Out to Anwar’s Dad

In a show chock-full of disappointing, absent, cheating, drunk, negligent, drugged parents & teachers & psychiatrists — it’s Anwar’s strict Muslim father who truly mans up and does what grown-ups are supposed to do — break down the big things into little things and show their children where to go.

Also, on the gay /Maxxie tip, I wanna sneak this one in there as one of the funniest moments of Skins…

Maxxie: “I got off with Tony on the Russia trip. I only did it ’cause I fell out with Anwar when he said he hated gays. So I got upset and Tony said he’d give me head to cheer me up, you know? And it didn’t mean anything but I lost my head, then he gave me head, then we got deported from Russia and I’m really, really sorry for being a slut, okay?” 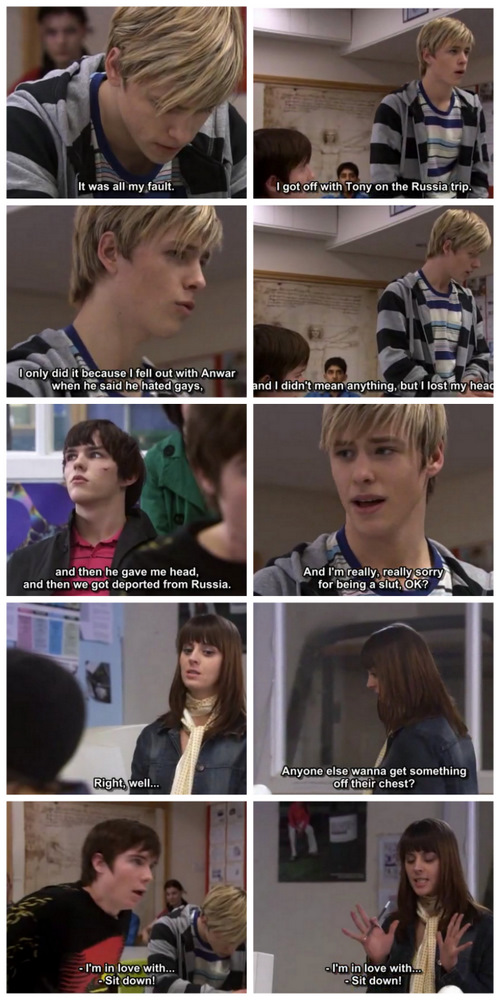 I also like how nonchalantly sexual fluiditity was handled in this episode. Skins has always been remarkably honest about its homos.

When Cassie says to Sid, “I’ll love you forever Sid,” and he says “Is that right” and she says “Yes, that’s the problem,” I mean… GOD.

The final exchange with her teacher at the end of the exam is like a referendum on the Skins kids in general — how do you reconcile your self-destructive relationship to life’s slings/arrows with a need to stay alive and an uncertainty regarding your desire for happiness or how to go about getting some. And in the end, all you can really do is dance.

Cassie: Is it possible to truly enjoy power?
Lawes: Sorry?
Cassie: It’s question three.
Lawes: I’m not supposed to help you with your exam.
Cassie: I stopped eating, and then everyone had to do what I said. That was powerful.
Lawes: And did you enjoy that?
Cassie: I think it was the happiest time of my life. But I had to stop because I was going to die, because… otherwise it wasn’t fun…. You wouldn’t understand.
Lawes: You’re wrong, Cassie.
Cassie: Did you cut yourself, too?
Lawes: People will do anything to– People will do anything to work out why they feel bad, won’t they?
Cassie: And did you? Work it out?
Lawes: Like I said, I’m not supposed to help you with your exam.
Cassie: I want you to tell me!
Lawes: What?
Cassie: How to stop bad things happening.
Lawes: Doesn’t work, does it? That’s why you have to start eating again.
Cassie: … I fell in love.
Lawes: Ah, love. Why cut yourself when you can be in love?
Cassie: You think passing an exam will make me happy?
Lawes: Cassie, passing exams generally only makes life more complicated, but there’s lots of other stuff that makes things bearable, and you don’t even have to use a knife.
Cassie: … Like?
Lawes: Disco. 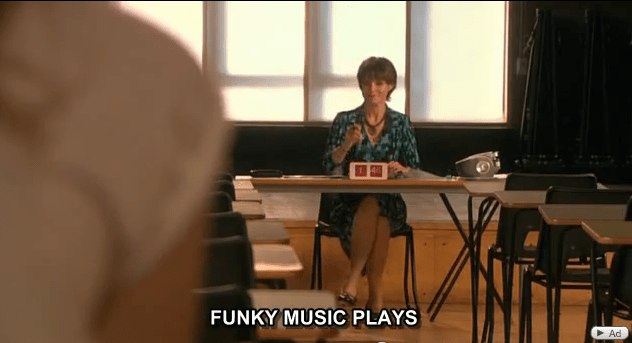