The first round of critics/bloggers/writers have seen the first four episodes of MTV’s Skins USA, a new spin on the groundbreaking original UK series, which debuts January 17th, — and they like it. They like it a lot. 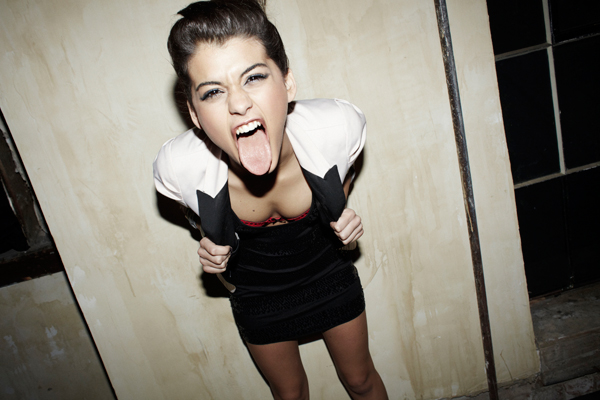 US Skins is a blaze of heat and heart, a skilled harmony of pathos and peculiarity. It does its predecessor proud.

Furthermore, our lesbian character, Tea (in the UK original, the homogay for Seasons 1 and 2 was Maxxie, a boy, but they did a gender-swap for the MTV version which totally annoys everyone in the world except for us, for whom a lesbian replacing a gay male character is probably the third-best thing that could ever happen to every show on earth, after “a lesbian replacing a straight male” and “a lesbian replacing a straight female” because you know we love straight people and all, but we are insane about lesbian characters, I mean duh, there’s basically an entire website dedicated to tracking the two-minute appearances of said lesbian characters and it’s called AfterEllen.com, which brings us back to where I began, which is that Heather Hogan has seen the first few episodes of Skins USA and she liked it. I should get out of this parenthetical statement and get this show more valiantly on the road) is the awesomest lesbian character ever:

In typical Skins fashion, Tea’s episode (the second episode of the season) is warm and sexy and real, with just a hint of trademark absurdity. (And in typical Skins-lesbian fashion, the camera loves Black-D’Elia.)

I think I’ve watched every episode of every show that has ever featured a lesbian or bisexual character. I’m so familiar with queer TV tropes I could write a thesis on them in my sleep. But “Tea” is unlike anything I’ve ever seen on American television. Her story tickled my heart and cuddled my brain — and then it punched me right in the gut.

Don’t let the pile of nakedness distract you: Tea is everything you hoped for, and nothing like what you’re expecting. “You want to know what we do, right?” she asks Tony. “What goes where? Who licks what? So tedious. I screw girls! So what?”

So what? is so right. One of the most brilliant things about Skins is that its gay characters are always so much more than what goes where and who licks what.

One character to look out for is the lesbian cheerleader Tea, who is portrayed by Sofia Black D’Elia. The most original character out of the entire cast, Tea’s inclusion helps create the diverging line from the U.K. series in terms of unique material for the show. If I say anymore, I could possibly ruin how much she rocks on the show.

At The Huffington Post, Tina Wells admits that she was hesitant to like Skins USA, but ultimately, “Skins wins where Gossip Girl failed“:

I want to be honest and tell you that I was prepared to hate this series with a passion. There’s nothing I detest more on TV than glamorizing bad teenage behavior. Weirdly, Skins does not come across as glamorous at all; it’s gritty at best. So how does it win? A fantastic cast, brilliant writing, and relatable situations.

My favorite character out of the four episodes I’ve screened is Tea (Sofia Black D’Elia). Tea is a semi-openly gay girl (friends know, parents do not, as witnessed by her dad trying to set her up on a date) whose survival, MTV promises, “will become the most vital thing in the world to us.” I completely concur. Tea is authentic in a TV world full of manufactured gay teens. When she starts hooking up with a guy and stops midway, only to erupt into laughter, you feel her pleasure and disgust.

That being said, most fans remain completely committed to hating Skins USA, apparently forgetting that they probably already spend four hours a day flipping aimlessly through 500 cable channels eventually debating between a re-run of The Millionaire Matchmaker and Two and a Half Men and therefore they probably will end up watching Skins USA if not willingly then by default.

I am not one of those cynical fans. I AM SO EXCITED FOR SKINS USA. As I’ve said before, I’d watch Skins UK re-runs all day and be happy as a clam, so why wouldn’t I watch a stateside remake also constructed by Bryan Elsley? All this gushing over Tea only ups my present level of anticipation. 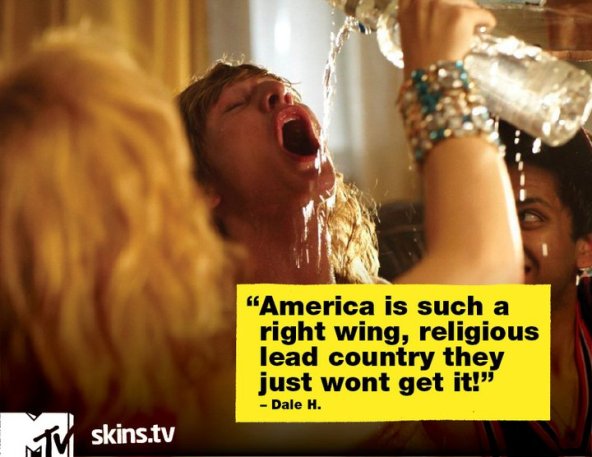 “My first sexual scene with a girl was definitely an experience, but it ‘s just another part of her character that I had to try and connect to and I was lucky enough that a couple of the girls I kissed were really pretty.”

Here’s the trailer if you haven’t already seen it: