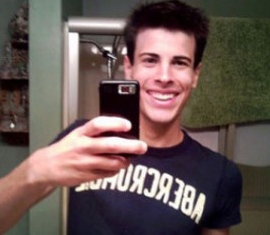 UPDATED January 19:
While the initial article from KSAX stated that the Douglas County Sheriff’s Office had confirmed Lundsten’s death was due to suicide, an update to the article now reads, “The Sheriff’s Office said Tuesday that the cause of Lundsten’s death was yet to be determined. Authorities had been working with the Douglas County Medical Examiner’s Office to investigate the circumstances surrounding the death. The cause and manner of death will be determined by the medical examiner after the autopsy process and laboratory testing is complete.”

In a phone call to KSAX, Lance’s father said the coroner had told him Lance had an enlarged heart and had died of a coronary endema; that he believed it was not a suicide, and that he believed there were no signs of drugs or alcohol in his son’s system. However, according to the medical examiner, the preliminary findings show that Lance did not die from an enlarged heart, and that the slight swelling was really due to “an undetermined cause.” A report released by the Sheriff’s Office yesterday said that the cause of death would be determined after both the autopsy and lab tests are actually finished.

So basically: first friends, KSAX, and The Sheriff’s Office thought Lance might have committed suicide because he was bullied over being gay. Then his father told KSAX the coroner had told him (in an unconfirmed-by-the-medical-examiner phone call) that Lance had died because he had an enlarged heart and he didn’t think it was suicide. Then the medical examiner said Lance hadn’t actually died because of his enlarged heart, he was small/young/healthy and that was a secondary finding, and that they’ll release a report when there’s actually a report to release. These things haven’t changed: that Lance was gay, that he was bullied, that his death, how it happened aside (for now), is sad/too soon.

The local Sheriff’s Office responded to an emergency call Saturday night and discovered Lundsten in need of emergency medical care. He was transported to a nearby hospital, where he later died. The Sheriff’s Office has confirmed that they believe his death was due to suicide, but has not gone into details.

According to KSAX, on a memorial Facebook page (now closed) friends said that Lundsten, who was openly gay, had been bullied over his orientation. A separate event page says:

“Lance committed suicide after he felt he had no other options. He faced relentless bullying at school. Lance was a senior in high school and was SO close to graduation but could not face the hatred and evil inside Jefferson High School.

I’m just asking you to remember Lance Lundsten when his funeral begins at 7:30 PM (8:30 EST). I’m also asking that you pause and reflect on how you treat others and what you are doing to end hatred.”

Shari Maloney, a facilitator for the Diverse Resource Action Alliance, an Alexandria-based organization dedicated to promoting an understanding of diversity, says:

“Bullying is a huge issue, particularly with the youth in our country now. I think because we’re in central Minnesota, and we aren’t as diverse as some of the larger Metropolitan areas are, someone who is different maybe draws more attention and it’s not always positive. […] I think we are a welcoming community, but I think we are also a very traditional community as well. As the world changes, I’m not sure if we’re changing.”

According to an earlier article by KSAX, Senator Al Franken has called Lundsten’s death a tragedy and hopes that new legislation might prevent in-school bullying due to sexual orientation:

“My heart goes out to Lance’s family, and friends and loved ones. It’s a tragic event, not only for them, but for the school, and the Alexandria community and really for all of us. LGBT kids really do need (more) protection. They’re two or three times more likely than straight kids to get bullied. Nine in ten LGBT students said they’ve been bullied or harassed and almost two-thirds say they don’t feel safe in school.”

The Student Non-Discrimination Act, Franken’s proposed legislation, would prevent schools from discrimination due to sexual orientation. It would also prevent them from ignoring instances of harassment. It is worth noting at this point that there is nothing in the Jefferson High School handbook (pdf) that forbids harassment over sexual orientation. If there had been, would Lundsten still be alive? It’s impossible to say. However, anything that works on fixing the poisonous school environment is a good thing. After Gay Teen SuicideGate 2010, Rachel wrote:

“Ten or twenty years ago, the Seth Walshes and Tyler Clementis were just a small-print obituary with no details, no explanation. It’s heartbreaking for us to hear about their lives and deaths, but the fact that we do means that we’re living in a time when people can be honest, when they can tell the truth without feeling like it will only make things worse.”

Instances like this are sad, but they remind us not to get complacent; that bullying is still a problem (in case you somehow forgot) and that it’s not going away just because this one day everyone wore purple or something.

His funeral will be held this evening.