The Legend of Zelda is the only series I can count on for an engaging, challenging boss fight every single time. Don’t get me wrong- other games out there offer exceptional fights, but Zelda consistently provides epic, top-notch ass-kickings unrivaled by any gaming franchise to date.

So in an ode to Zelda’s amazing bosses, here’s my top 5 battles. They occur across the games, in a variety of dungeons, palaces and temples Link finds his little elf way into, Note: I haven’t played Majora’s Mask through completely, so forgive me. Haters don’t hate! 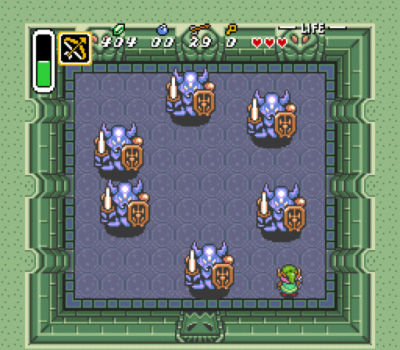 The first boss fight and first dungeon set the standard for the rest of the game. It’s a solid, challenging fight, with a great score. Those crazy knights hop all over the place– it’s pretty disorienting upon first try. And if you haven’t stocked up on arrows you’re pretty much screwed. Keep that in mind.

It’s possible I have a soft spot for this boss fight because A Link to the Past (SNES) served as my Zelda initiation. This was my very Zelda boss fight in a long line of such fights, leading me to this moment in time when I knew all of my hard virtual work would come to fruition in a gaming article on a radical lesbian website with a Leftist Agenda. 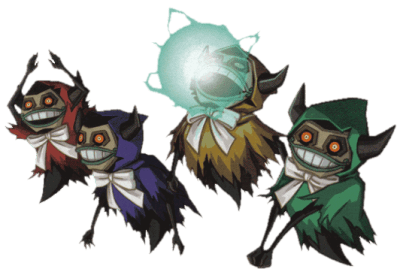 These ladies are tricksy! We begin as your character is exploring a Ghost Ship (aptly creepy– did you look at this picture?!). You run into this distraught young woman, who very innocently puts her case to you: she seems to have misplaced her sisters and she needs your help to find them. Since you’re a a tiny heroic elfin thing in a green tunic, naturally you oblige. And hey that was real nice of you, but then the sisters say they are going to take you up to the top deck to reward you, which sounds kind of kinky or fishy. Which is when you figure out you have been DUPED! That shit turns into witches who wanna kill you with lasers.

This boss fight is great (once the sting of betrayal fades) in large part because its mechanic takes full advantage of the DS’s dual screens; the Sisters are shooting down at you from the top screen to the bottom screen, and you have to play a sort of volleyball with them to win, knocking their own balls of energy back at them to inflict damage. This new twist on an old Zelda staple (the death-match volleyball type game appears in Ocarina, Windwaker, and Twilight Princess) makes this a perfect synergy of old and new. Something borrowed, something…possessed by Satan, shooting lasers at you? 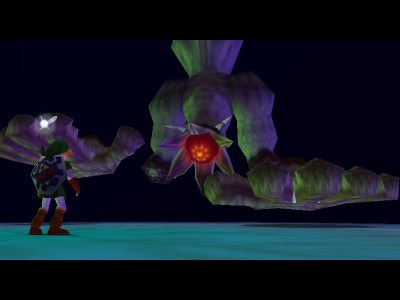 Seriously, I think this is the bangin’est boss fight in the whole Zelda series, on top of being extra fucking creepy. Bongo Bongo’s body is invisible until you manage to hit each of his hands with an arrow in quick succession. All while his hands are busying themselves with slapping the giant drum you’re standing on (which makes this shit turn into a moonbounce) and you know, trying to smash, punch, and throw you. Once you get the timing down, it’s time to get trigger happy. Sword happy? Hilt happy?

The “take out the hands to get to the eye”  strategy is another random Zelda staple (there are countless other boss fights employing an identical mechanic), but this is far and away my favourite instance of it. Bongo Bongo is a satisfying end to a great temple. Gotta recommend playing this one with the volume obscenely loud to get the full effect of his tribal drum thumping. 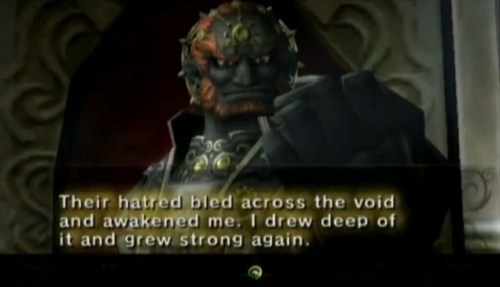 Remember when I mentioned deathmatch volleyball as a staple of Zelda games? The final boss at the end of Twilight Princess is Ganon (as it often is at the end of most Zelda games), and you have to fight him in four forms. First, he possesses Princess Zelda (gasp!) and you have to beat her at Volleyball of Doom before he turns into a giant boar thing, which you have to bite to death as a wolf with the help of Midna, your whack-ass fairy. Next, you chase him around the picturesque Hyrule field on your horse with Zelda, whacking him with your sword when she stuns him with Light Arrows. Which is the kind of arrow a you find in the quiver of a princess.

Once you knock him off the horse, you get to sword fight and it isn’t easy; the AI is clever and unpredictable. On top of the ABSOLUTE GLORY of winning, you find yourself pleasantly surprised to discover that not only is Midna alive and well, but she’s actually a total fox!

Reward: Uh, you win the game. Shit’s OVER. And presumably, you reward-bang Midna. 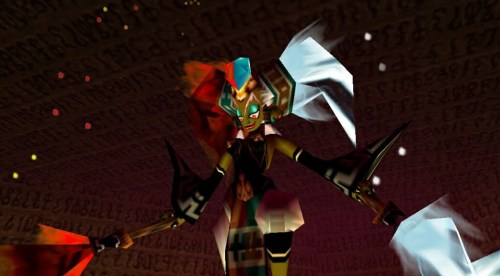 When Koume and Kotake, two homely old witch sisters, team up to kick your ass, this is what happens. And it ain’t pretty. Meet Twinrova, a.k.a. my FAVOURITE BOSS EVER.

(Aside: some research just caused me to discover that Koume and Kotake are apparently both surrogate mothers to Ganondorf? What the frack? Is there a biologist present who can explain that?)

The beauty of this battle is the strategy required to win: Koume uses fire attacks and Kotake uses ice attacks, and earlier in the Temple you just happened to stumble across this fancy mirror shield that allows you to deflect beams away from you. That’s some Yin Yang shit right there.

Logically, the first half of this battle consists of hitting the witches with the elements they are weak to- deflecting Koume’s magic to hit Kotake and vice versa. If you aren’t poised and ready for their attacks, they hurt. A lot. After knocking each witch around a bit, they decide to “get serious” and do their “Double Dynamite Attack” to become Twinrova.

Twinrova winks at you rather saucily and then goes on to attack you with alternating balls of fire and ice. To me, Twinrova is the perfect boss battle- I remember playing it for the first time when I was about 12 and getting endlessly frustrated with the strategy. When I finally did win, my exultant moment set off a chain reaction of first-pumps and victory the likes of which you’ve never seen.

* Dark Link, Mini-Boss / Pre-Boss Boss of the Water Temple in Ocarina of Time 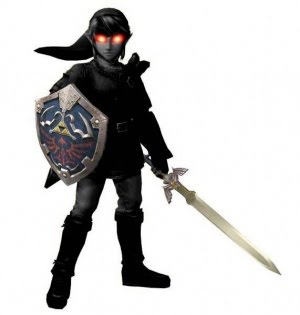 Dark Link is actually a Mini-Boss, but it’s my list and he’s getting an honourary mention for being harder than the Water Temple’s real boss. This asshole mimics your every move, making fighting him the most infuriating thing I have encountered in the whole Zelda series! Of course, this is an indication of well thought out AI, which is why he gets an honourary mention. Also, Taylor apparently has never defeated Dark Link in that Super Smash Brothers Melee level on Gamecube and “hates the fucker with the fire of a thousand suns.” Smug little fuck. 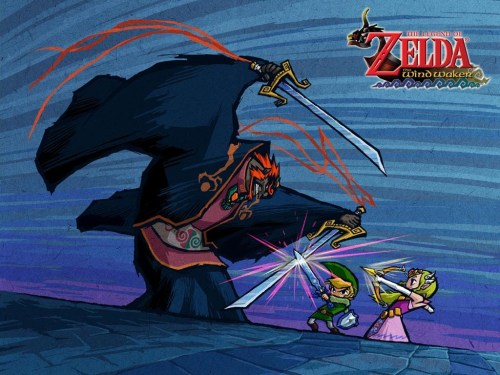 Many Zelda fans were disappointed by Wind Waker but I actually liked it quite a bit.  I thought it brought some much needed levity to the series, and showed that Zelda was capable of being both fun and cartoony, while offering some seriously challenging puzzles. This fight always gets me nervous, if only for Ganon’s sheer size over Link and his showoff swordsmanship. But lo, the fight ends as it tends to when Ganondorf is involved: with the Master Sword up in his grill.

Don’t feel like rummaging around to find your whole Zelda collection?Check out this  sweet compilation of every final boss fight in the Legend of Zelda series: