Comics are literally the earliest memories I have, and some of the most vivid ones. Those stapled together 22 pages of art and dialog were a part of my life way before I realized I liked the girls running around the playground instead of the boys. At the ripe age of three my dad began taking me with him every Wednesday for his comic run, fast tracking me into geek indoctrination. I’d follow him down the aisles that were lined with rows of brightly colored issues, gawking at all the pretty pictures on the covers. He’d pick up his Batmans and Green Lanterns before turning me loose on the more kid friendly section. Hopped up on sheer excitement, I’d race over to get my sticky little hands on Scrooge McDuck, Richie Rich and Beauty and Beast. Then the two of us would head home where he’d read my comics to me in silly voices. It’s maybe inevitable that I’m somewhat fond of the medium. 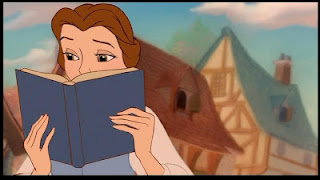 As I grew up I fell in and out of comics, but they’ve always seemed to be there during the important parts of my life, including the am-I-seriously-this-queer-for-other-chicks? years. There’s no getting around the fact that mainstream comics themselves have had a tumultuous relationship with the LGBT movement, as well as how women are portrayed in general. It seems for every applause for a gay character done right, there’s an outcry for turning a female character into little more than a blowup doll. For a gay female reader it can be a lot of feelings to weather, but we’re here for all the love, right? So let’s get started with a little trip in the way back machine (or Police Box, whichever you prefer).

Comics had their heyday in World War II during a period of the industry called the Golden Age. In the issues published during the war, Superman, Captain America and everyone else were constantly beating the ever-loving crap out of Hitler. Much like wearing one feather earring or having Britanna gifs up on your tumblr, this was the cool thing to do. Kids were snatching up issues left and right, and soldiers were getting them in care packages. After the war ended though, there was no need for the the square jawed boys and hourglass shaped gals to run around punching Nazis or telling kids to recycle. Wonder Woman was still around, but the higher selling page turners of the 50’s became the horror and crime genres. Then in 1954 a psychiatrist named Fredric Wertham published a book called Seduction of the Innocent that nearly destroyed the entire industry. 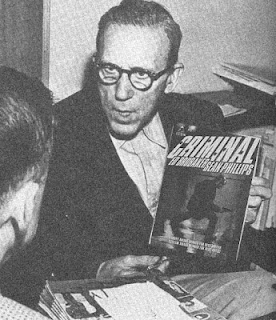 the time honored tradition of scaring americans with unaccountable facts

Wertham was the Sylvester Graham of his time, only with comics instead of flavorful foods, and with nothing tasty coming out of his diatribe. Seduction of the Innocent basically told America that comics were ruining their children, and they were all about to turn into long haired criminals. Wertham claimed via many undocumented incidents that there was all sorts of wild drugs, sex and violence in comics. Not only that, but the very heroes that had been symbols of patriotism during a World War were straight up dangerous to the young, malleable brain matter of America. Superman, a guy whose tagline is “Truth, Justice, and the American way,” was branded a fascist and un-American. Batman and Robin were accused of being gay partners, a label that still fuels many jokes to this day. Finally, Wonder Woman was accused of promoting bondage (although that was kind of a known fact as her creator was a tad on the strange side) and was labeled a lesbian because she was a strong and independent woman. 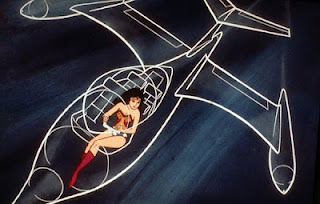 Instead of being rational, the nation’s level of panic quickly jumped from “Huh?” to “Holy shit let’s burn some books.” Comics became taboo, with bans and mass burnings of issues occurring in cities, and the Senate Subcommittee on Juvenile Delinquency having hearings entirely focused on the potential harm of comics books. The industry, rocked by derision and the threat of being censored by the government, formed their own brand of censorship called the Comics Code Authority. The CCA swiftly became to de-facto seal of approval and banned depictions of violence, drugs, gore and sexual innuendo of any kind. Entire publishing companies went under while the few who were lucky enough to keep their head above water scraped by, and for many years the CCA went unchallenged as it hindered good storytelling. It wasn’t until 1971 when Spiderman had an issue about drug awareness sponsored by the US Government that went to print without the CCA stamp of the approval because of the drugs that anyone attempted to sell something without the CCA. After the lack of pieces of sky falling from the Spiderman issue, the CCA slowly lost meaning. However, not unlike like that one straight guy hitting on femmes during ladies night, it just wouldn’t go away. While the CCA was a shell of its former self by the time the 90’s rolled around, it wasn’t until 2011 that the last publishing companies ceased using it and it finally ended.

With all the crazy self-censorship and fearmongering the entire comic book industry went through (and that a lot of people feel it’s still haunted by) it took a long time before mainstream comics got to taste the rainbow. Underground comics that gave the CCA the finger did whatever they wanted for years which meant same-sex desire was frequently addressed. In the 80’s British writer voted most-likely-to-be-Hagrid’s-cousin Alan Moore had published the queer history centric anthology Mirror Of Love to raise awareness for LGBT rights in England, and then wrote the classic Lost Girls in the 90’s. However it took a lot trial and error from DC in the 80’s (they kind of got hung up on AIDS) and a major leap forward by Marvel in the 90’s (who had a ‘no gay’ policy under Jim Shooter in the 80’s) with their character Northstar coming out of the closet to get gays into what was considered the mainstream. Then, as the early 2000s hit, the market opened up, with Independent Press picking up steam and becoming a larger part of the industry. Creator owned works spanning many genres began garnering more viewers, the internet made everything more accessible and things started getting exciting. Gay and straight writers and artists alike were adding more gay characters, with purpose, and a lot of them were pretty damn good. 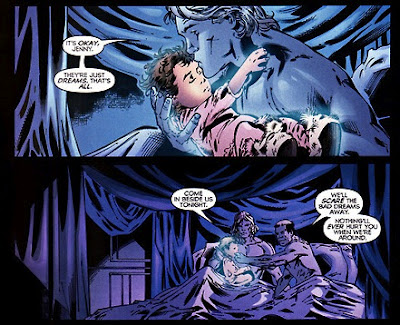 While there have been some fabulous gay men in comics and the X-Men themselves have become a powerful metaphor for gay rights, there are/have been some pretty awesome queer women in comics (as well as ladies in general behind the scenes). As we all know, our patron saint of lesbos in tights and capes is the sexy, smart, Bechdel-test-passing Batwoman. And there are others beyond Kate Kane, more than I’ll be able to remember to put in this article. But let’s start with Kate’s ex-girlfriend Renee. 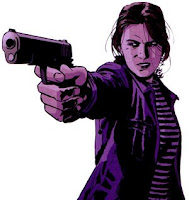 Renee Montoya is a good example of a complex gay character. Entering the Batman world in the 90’s, she was written straight for the better part of her existence. However writer and friend to ladygays everywhere Greg Rucka saw Renee differently. He saw her as closeted and engaging in bearding due to her job as a Gotham City Detective as well as her Roman Catholic family (this closeting would be the reason Kate broke up with her). In Rucka’s story lines about the day shift in the Gotham Central comics, Renee was outed during a case and had to come to terms with it professionally and personally. Her family quickly disowned her, and disgusted with the corruption in her job, she eventually walked. Struggling through alcoholism in the beginning of the weekly title 52, she began working with the vigilante the Question to solve crime. Ultimately taking the mantle up herself, she used it to team up with a member of the bat-family named Nightwing to bring down some villains as well as rescue the crap out of her ex-lady love, Kate Kane. 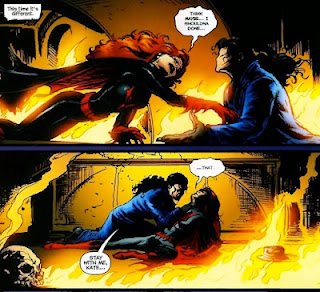 Then there’s Xavin from the Marvel Universe, who a lot of people consider the first transgender superhero. Introduced later on in Brain K. Vaughn’s teenage-shenanigans-with-superpowers classic the Runaways, Xavin is a type of shape shifting alien called a Skrull. Landing on earth, the then male-bodied Xavin announced he was in fact betrothed to Runaway member (and alien of a different race) Karolina. But then this totally happened- 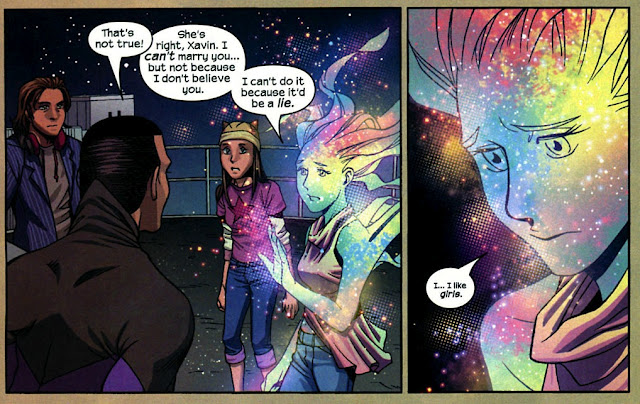 However Xavin, being a shapeshifter, did this- 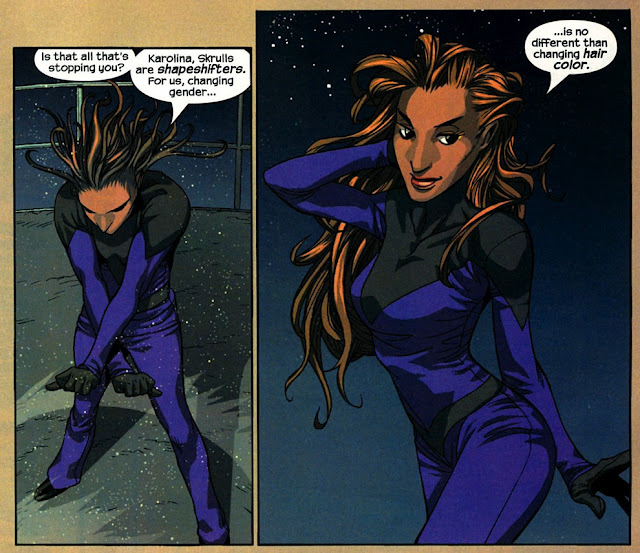 there are no words

Karolina was initially skeptical that Xavin was truly female, but in the end saw Xavin’s female identity as authentic and fell deeply in love with her betrothed. Xavin alternated between male and female genders from time to time, taking advantage of the fact that a male identity was perceived as more intimidating in certain situations, yet generally presenting as female when showing affection to Karolina. Crazy in love those kids were.

The list goes on from there. Over the years the blue-skinned Mystique was with Destiny, while Harley Quinn ditched the Joker to be with Poison Ivy for a spell. Maggie Sawyer, Captain of the Gotham City Police Department’s Major Crimes Unit, is not only uber gay but currently dating Kate Kane. Strangers in Paradise had all the feelings, Y-The Last Man literally had one man running around on earth, and the Buffy-verse is still going strong in print. Queer icons Willow, Tara, and Kennedy all get some page-time, and even Buffy the Slayer’s done some experimenting herself. 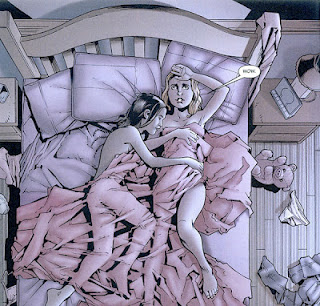 There’s way more than what I’ve written about here. The comics industry is a big, crazy, complicated, ever-changing world with a lot of history. If you’d like to know more about comics in general, be it about Our Lady Of Perpetual Queerness Batwoman, the underground comics during the reign of the CCA or more queer comics in general, I’d like to point you in the direct of Prism. Founded in 2003, Prism Comics is a non-profit organization all about the queers and the comics they love. They have a comprehensive history of LGBT comics as well as promote and review LGBT comics from all spectrums of the industry. 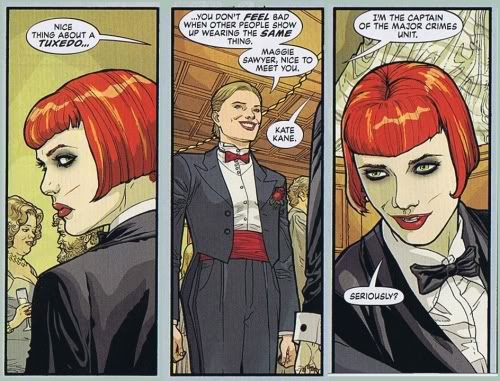 Did we learn a lot? I sure hope we did. Here’s Kate & Maggie.

Ash has written 5 articles for us.