The L Word: Generation Q Season 2 premiered on August 6th, and this is absolutely everything we know about what to expect! Information below is perpetually updated and is organized from newest piece of information to oldest. Be careful, there are spoilers inside some of the photo galleries!

Be warned that photos of future episodes might contain subtle spoilers!

Recap and Podcast from 208, “Launch Party”

Recap and Podcast from 206, “Love Shack”

Recap and Podcast From 204, “Lake House”

Recap and Podcast From 202 “Late To The Party”

Recap and Podcast From 201 “Late To The Party”

The L Word: Generation Q posted a graphic sharing the season’s episode names, and they are:

Carolina will be playing “Marissa,” who meets Nat at an event in the first episode.

Our long drought is over and we FINALLY HAVE A FULL LENGTH TRAILER FOR SEASON TWO!! In it you will find everything ranging from the adorable (Bette, Alice, and Shane doing drunken karaoke? Yes please!) to the hotttt (confirmation of a Bette/Gigi hook up! We cannot wait until August!). There was so much to cover that our TV Team broke down the entire trailer, shot by shot, in a separate post which you can find right here.

Showtime has announced that they will release new episodes of “The L Word: Generation Q” on its streaming services two days prior to their airing on linear TV — meaning streaming subscribers and those who subscribe through a pay-TV cable package will be able to watch on Friday nights. This apparently will “give it some breathing room” when other tentpole shows, like Billions, are added to Sunday’s linear schedule on September. I’m honestly not sure what that means!

According to Digiday, “Showtime picked “The L Word: Generation Q” as the show to give to streaming audiences early, in part, because it has a committed fanbase of viewers likely to seek it out on streaming.” Apparently over 30% of the show’s audience tuned in via streaming, which is on “the high end.”

The L Word: Generation Q will premiere on Friday night rather than a Sunday night but then will shift to its regular spot on Sunday nights.

TV Line has heard rumors that “you can count on a summertime premiere” for the show, and then we heard that it was August 8th, and then Jacqueline Toboni said “see you August 8” on her instagram so this date feels pretty solid.

The L Word Generation Q Season 2 filming wrapped on May 25th, with additional wrap photos popping up on the instagrams of Kate Moennig, Leisha Hailey, Jamie Clayton and Jennifer Beals. The week prior, Jillian Mercado and Arienne Mandi wrapped their filming for Season 2.

It Looks Like Alice is Becoming An Author in Season Two

A recent instagram post from Leisha Hailey shows Alice on the beach with Tom (Donald Fasion) who is described as “a successful book editor with an effortless sense of humor.” Another social media post features Alice at the red carpet premiere for “Don’t Ask Alice” and the logo on her step-and-repeat behind her looks very much like a publisher’s imprint!

In an interview with (former Autostraddle writer!) Jess Rotschild on her podcast “Deep Dives and Hot Takes,” Rosie O’Donnell spoke about her upcoming role on Season Two The L Word Generation Q as Carrie, Tina’s Fiancée, a “down-to-earth lawyer with no frills.” Rosie said when she first saw the original series, she was confused: “where are all these high fashion lesbians who travel in packs?”

“It’s been really interesting to see… how do you make a Rosie O’Donnell fit into The L Word?” Rosie told Jess. She said her role as Tina’s Fiancée will entail “meeting all of her group and feeling like the outside and like I don’t have the right clothes and they’re never gonna accept me. And they’ve written that beautifully.” She feels intimidated by Bette Porter “shows up looking like a fashion magazine and I’m there trying to make sure my stomach isn’t showing.” She said the role has allowed her to look through all her self-esteem issues, “and when they find out I have some 12-step going on or some demons in my past or … not taking care of myself. They put it all in there.”

Rachel Shelley, who has been editing/producing Kate and Leisha’s Pants Podcast and in Season One was shown texting Shane on her birthday, is returning for at least one episode, according to imdb, who has her on the roster for episode 203. I hope this is an in-person thing and not like, a voice mail? (Hat tip to the.ash.silver, who noticed the news first!) (UPDATE: They seem to have cut this cameo ’cause the whole season has completed and she did not show up)

Vanessa Williams is Playing Pippa, an Artist Bette is Obsessed With

According to Variety, veteran actress Vanessa Williams has been cast in a recurring role in The L Word: Generation Q Season 2! Williams will be playing Pippa Pascal, described by Variety as “an incendiary artist who’s been out of the public eye for almost 20 years — until Bette becomes determined to track her down.” You might know Vanessa Williams from a million things from New Jack City to Candyman (she’s also starring in this year’s sequel to the cult classic, directed by Nia DeCosta, which we should’ve had by now but thanks Covid for ruining so much about my entertainment life!) to Soul Food: the TV Show. So… Pippa is an artist, she’s hot, it’s a reoccurring role, she’s roughly Bette’s age…. and anyone who remembers Jodi Lerner can see what might be cooking up here!

In December, it was announced that O’Donnell will be playing Carrie, “a kindhearted public defender who is thrust into Bette’s life and quickly gets under her skin” on Season 2 of The L Word Generation Q. O’Donnell has since taken pictures and posted TikToks from the set of the show. Eagle ears recognized that “Carrie” was the name of Tina Kennard’s fiancee. Rosie returned home in mid-February, so her run is probably just a few episodes. Jennifer Beals has tagged photos of herself and Rosie as #bettesworstnightmare.

According to IMDB, Brook’Lynn Sanders, a teenage actress, has acquired the recurring co-star role of “Kayla Allenwood” in The L Word Generation Q Season 2. People who know too much about The L Word will recognize “Allenwood” as the last name of Marcus Allenwood, the artist who gave his sperm to Bette and Tina so that they could make a baby. Also, Angie is a series regular now so there will be so much more of her in general!

The Scrubs star will be appearing as a successful and funny book editor who is working with Alice on something. Perhaps that something… is a book? 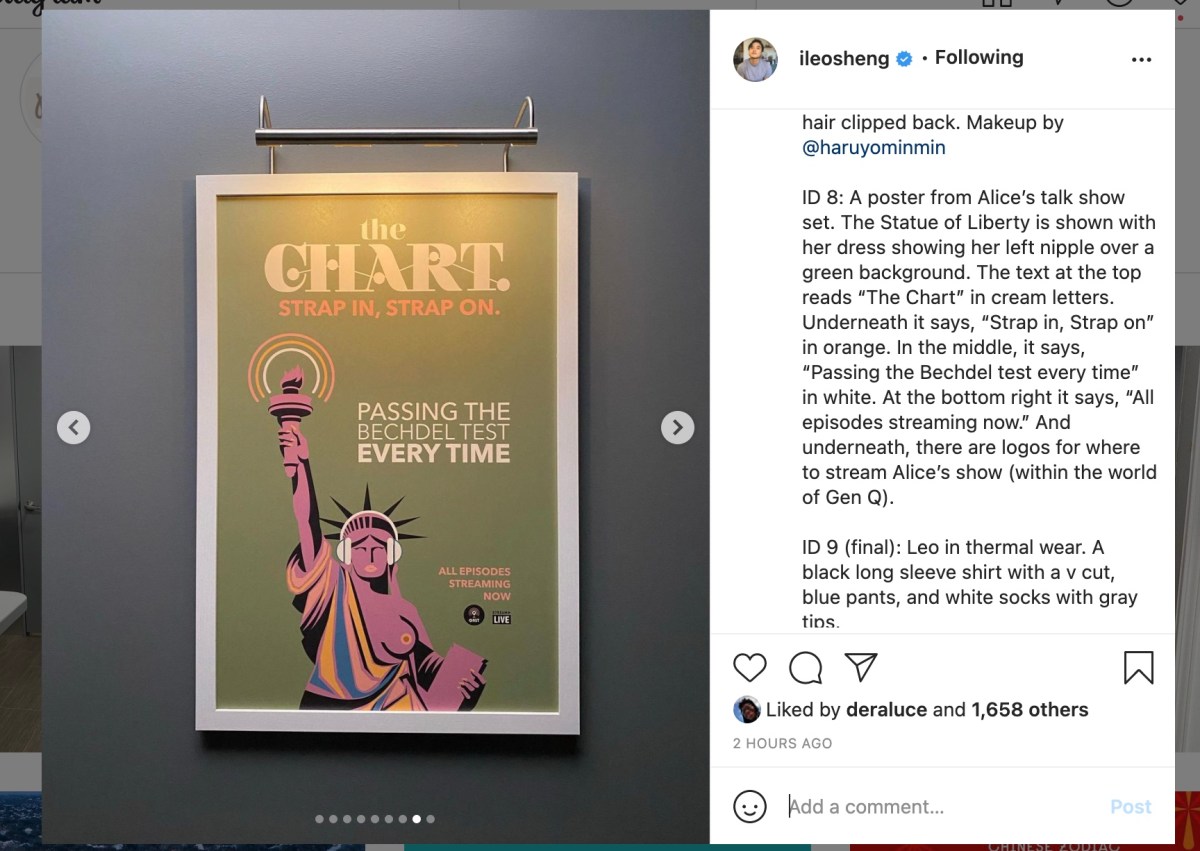 via Leo Sheng on Instgram

Leo Sheng recently did a “Season 2 Photodump” and one of the pictures featured what is described as “a poster from Alice’s talk show set” with “logos for where to stream Alice’s show (within the world of Gen Q).” “The Chart” was, of course, the name of Alice’s truly terrible KCRW radio show from Seasons 2 + 3 of the original series in which she basically told everybody in Los Angeles about the sexual liaisons of all of her closest friends, and then was sad about Dana for a long time. Anyhow! Will The Chart be a podcast or a TV show? Do people call podcasts “streaming”? But also, the headphones on the boob statue? Wow, so many possibilities here.

There seems to be a few characters described as cops or detectives and none of them are named Tasha Williams. If this is about Bette defending Angie from that guy trying to attack her on the stairs after the play then I swear to G-d I will scream into every throw pillow in the Los Angeles metro area. (With a mask on.)

Tina’s fiancee Carrie being part of the show is a pretty solid hint that Tina’s returning to our lives and so are the photos of her on set and in table reads!

Bette’s Returning to the Art World

Griffin Dunne (I Love Dick, Girls) is set to guest star as Isaac, a big international art dealer who builds a relationship with Bette. There’s also the aforementioned Pippa. Furthermore there are a few other art-related characters already slated to exist, including a few artists, another recurring male international art dealer, an art assistant and an “art enthusiast.”

On the PANTS podcast, Kate Moennig was like, working with Jamie is “reminiscent of the original show” and also all of Jamie’s scenes are with Kate and also their characters have a “complicated dynamic” in which they “challenge each other.” “We’re definitely like an It’s Complicated,” said Jamie. “It’s Complicated, totally, Facebook Status 100%,” Kate said. “It’s complicated. Are we giving anything away? I don’t think so.”

Dani and Gigi Look Great … Together?

Watch this spot for more updates as we obtain them!