I’m ironing a shirt to wear on my first visit to my partner’s church when I hear about the shooting at the synagogue I grew up in.

We’re in Lancaster County at Erin’s family’s house, surrounded by plastic Bible quiz trophies adorned with gold crosses and family portraits taken at national parks. My bewildered partner comes to me, face slack, and tells me I need to call my mother.

There is no protocol for this sort of occasion; only what the body knows in its own shock and instinct. Erin shows me their phone, where a Twitter newsfeed tumbles and descends. A man walked into Tree of Life as Saturday morning services began, screaming that all Jews must die as he began to fire garlands of bullets into the backs of congregants, people I’ve known since I was a child. I tell Erin no, because in that moment, I can’t remember any other word. I hear someone wail, and it isn’t until Erin and their mother have their arms around me that I realize it’s me.

It’s then that Erin’s mother begins to pray. Closing her eyes in supplication, her wishes are pure and fierce: protection over me, protection over my loved ones. She says this in Jesus’ name. I hear her child, my partner, an ex-evangelical, join in at the end.

Amen. It’s a word for the end. But as we all open our eyes, before we leave to go back to go to Pittsburgh, towards the wreckage, towards home, I know it’s only the beginning.

Three months before the shooting, Erin and I are driving back from my first encounter with their parents, dazed and content. I expected horror stories, though my partner had never told me any. I expected Erin, a politically progressive genderqueer person from small-town Pennsylvania, to be at constant, diametric odds with their parents and three siblings, a family comprised of choir singers and homeschool education. In my largely liberal urban upbringing, I had little to no contact with the evangelicals who flanked the periphery of my general idea of oppression, bulbous and caricatured.

But this hadn’t been the case. Erin’s father, a former molasses salesman, had been as winsome and charming as his old-timey profession implied; their mother, a breast cancer survivor, shoved grilled vegetables and organic juice at us with the same verve my own Jewish mother would have done. Though the meeting had been brief – a long lunch in Erin’s childhood home, complete with requisite familial questioning and patter, gauging my prospects – it ended with an invitation to both Thanksgiving and, most importantly, Christmas.

It was kind of them, I tell Erin, though their ask had been tentative, as if the very idea of Christmas offended me. I thought of Starbucks cups with illustrations of queer couples holding hands amidst lattes and ice-skating rinks, of purported wars on holidays I have no interest in. I was more than welcome to celebrate Hanukkah in their house too, they had told me; their crestfallen faces seemed genuine when I told them that Hanukkah didn’t coincide with Christmas this year.

“They really liked you,” Erin tells me, taking my hand.

Our car heads ever westward, toward a sunset. I don’t question my partner about what their parents liking me means. One meeting doesn’t erase the difficulty of coalescence. Despite their kindness, it’s hard for me to shake off a deep-seated discomfort that, in many ways, has nothing to do with them. I remember a girl I was friends with in middle school, the daughter of a pastor who threatened me with descriptions of hell, who said that her attempts to convert me came from a place of love, not an inherent hatred of the biggest part of myself. The dozens of faceless people on the subway when I lived in New York, who called me queer and told me to find Jesus; the older boys at the local Catholic school who taught me the word kike, who laughed as they yelled it, as I walked home from the bus stop every day, who didn’t care I was only six years old.

They all taught me one thing: that when others say they’re doing what is best for you, they are lying without knowing it.

In September, I sit in a church at my partner’s sister’s wedding and watch Erin walk down the aisle in a dress the color of mulled winter wine. I’m in the back, unsure of whether sitting with Erin’s family could be considered an impropriety. I field looks from other attendees who don’t quite know how to measure my thatch of curly dark hair, my maroon trousers, my navy tie, my men’s shoes. I pretend not to notice when an attendee sitting next to me moves closer to her friends with two palpable and painful shifts. The pastor at the pulpit tells us all that love is patient and kind before the couple takes their vows. He swells with pride as he recites a blessing; everyone bows their heads in the name of Jesus, including my seatmate.

Later, at the reception, I look for Erin as certain relatives come up to me. An uncle thanks me for being there, his voice quivering with emphasis and portent, but doesn’t elaborate. One of Erin’s cousins, a fellow ex-evangelical, confesses that they used Bible pages for rolling joints in college, not knowing that my overt queerness doesn’t necessarily mean that I don’t believe in G-d. When I tell her that I keep kosher and go to synagogue on Saturdays, she blushes and changes the subject.

After the shooting happens, I will tremble at the thought of stepping inside a synagogue again. The temporary cardboard memorials placed outside of Tree of Life, each one bearing the name of a victim in marker, will come down one by one. Flowers placed by mourners will brown and curl with age, and someone will come to sweep them away. Erin will coach me through panic attacks, will knead the muscle between my shoulders and tell me to breathe. I will weep. Erin will take me in their arms and murmur promises neither of us will remember. One day, says Erin, one day.

We are hurtling towards that moment, but right now, at the wedding, we’re blessed in our unawareness. My partner takes me to the middle of the large room, where tables have been cleared for a dance floor, and we spin each other, laughing. Erin’s mother tells the photographer to take a photo, and afterwards, she kisses us each on the cheek and tells us we’re beautiful. We are a love story, like Erin’s parents once were, as mine once were, and that is enough, for now.

This Hanukkah, Erin and I will have a wreath of pine needles and filigreed tinsel fastened to our door. A nine-branched chanukiah will be placed upon our sill, candle flame quivering with the knowledge of their own brevity and brightness. We will hang a sign where silver, ballooned letters spell out the phrase l’chaim, to life. As we recite the same blessings that my ancestors have intoned for millennia, I will hold my partner’s hand. I will say these words for my life, and for Erin’s, and for the life we never knew would find us. 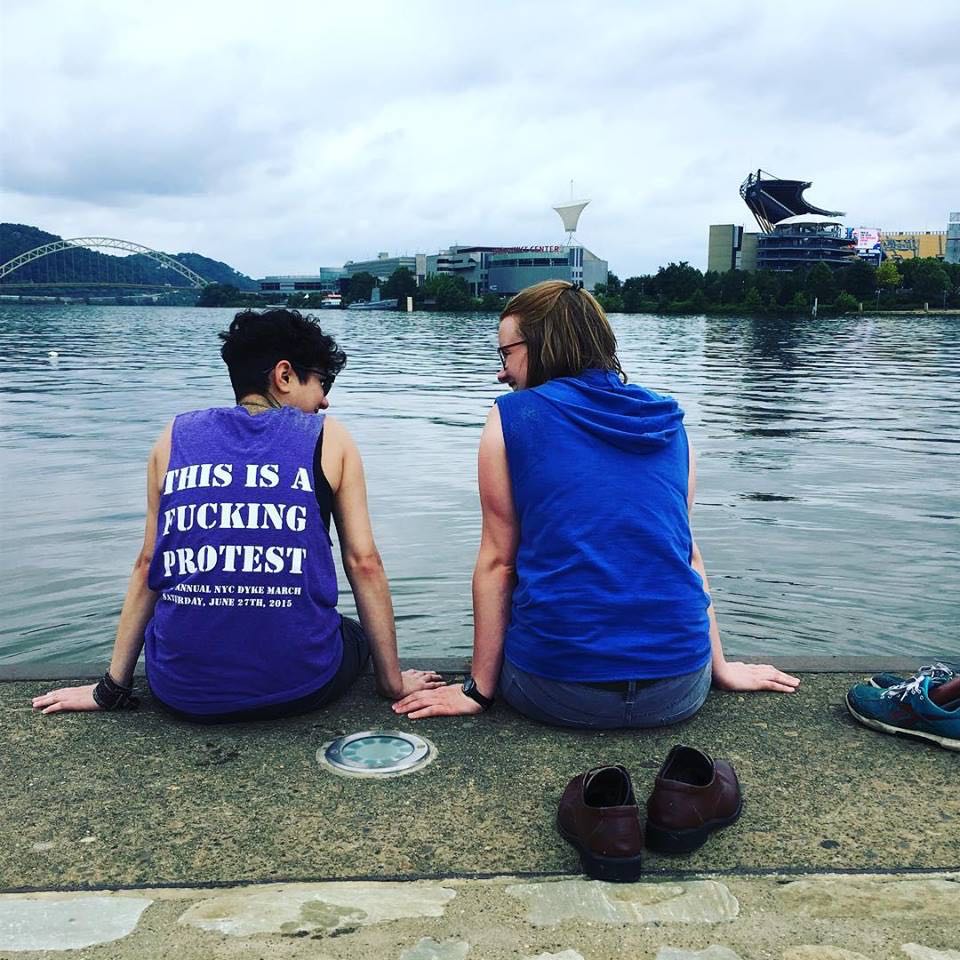 J.E. Reich is a genderqueer fiction writer and journalist whose work can be found at Vanity Fair, Slate, Jezebel, INTO, High Times, The Toast, and other places. They split their time between NYC and Pittsburgh, and tweet insufferable dad jokes @jereichwrites.

J.E. has written 2 articles for us.