Have you heard the good news? We can get married in New York now! We can get married if you have cute glasses, muscles, and an undying love for Iron and Wine. Just kidding, I’m too young to get married. Anyway, lots of people celebrated! Famous people were happy (“gay” if you will), Robin gave away photography for your wedding, and Carly talked to people on the street. Also I’ll Have What She’s Wearing returned! In bad news The Real L Word still exists. In actual news that matters, Queers in Puerto Rico are living in a seriously anti-gay climate. Rachel and Stef reviewed Appetite for Reduction, Akwaeke Z Emezi questioned presentation and gender roles, and two lesbians went to Bali.

This week’s group pick is brought to you by AutoChat!!!; it was novastar who recommended it when I asked for suggestions in the nearly-empty chatroom. Our own Rachel-shaped person created this group about The X-files, which is a TV show I feel like I will never finish watching, and a TV show that many of you say “made you gay.” So, how about that Scully, eh? (I didn’t mean for that to rhyme. I’m terribly sorry.)

The How Do You Hold a Moonbeam in Your Hand Award to Rabbit: “…Is it weird that when I read ‘the lesbian problem’ I immediately started singing, “How do we solve a problem like the lesbians?” to the tune of that song from the Sound of Music?
Seriously, though, what a stupid question. That’s like saying how do we solve “the awesome sexy badass intelligent problem”.”

The Awww Award to Candice: “Crying at my desk, per usual. lol.
p.s. I asked my gf to marry me that night. She said YES!”

On Celebrate Equality: Win Wedding Photography by Robin Roemer for Your Gay Wedding!!!:

The Conservative Nightmare Award to Britt: “I want to marry you comment.. and have Robin photograph it.”

On I’ll Have What She’s Wearing Returns with Jessie, a Cute Tomboy from Atlanta:

The That’s Cheaper than Buying AA Leg Warmers Award to anaphase: “I don’t think I could cut the sleeves off an American Apparel hoodie, that’s probably like $20 right there!”

On Which “Iconic Sci-Fi Sex Symbol” Actress is Ready to Come Out Lesbian?:

The I’m Ovulating Award to novastar: “She’s married to a dude and has had more than one child with him. So, considering how much lesbogays love babies, that’s a definite maybe.”

On Lindsay Lohan’s Tweets Have Finally Completely Lost Me:

The B.A. in Marketing Award to Steph M.: “Why do I think of breasts every time you say “MASSIVE MEDIA PLATFORM”?
Oh, yeah – because I’m a lesbian. That’s it.
Carry on.”

The We’re All In Award to theflyingdutchwoman: ““The more interactions Americans have with same-sex couples, the more Americans will accept same-sex marriage.”
so.. more PDA by gay people, will somebody get on that?”

The Award for Excellence in Drunk Commenting to Christine: 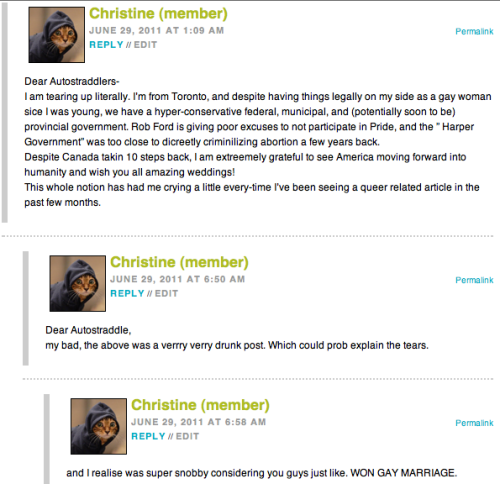 On Today’s Reason to Talk About Julie Goldman:

The Spoken Word Award to AG: “I once saw her request Superstar at a Tegan and Sara show, and Tegan played it.”

The Creator and Executive Producer of Everything Award to collectedprose: 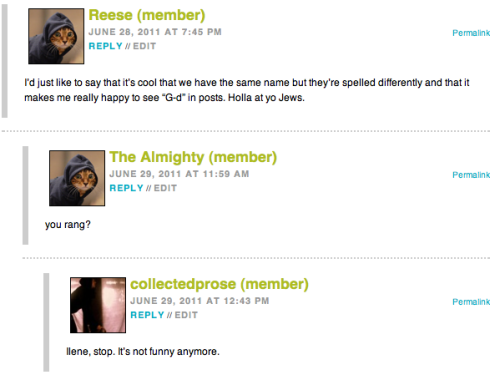