April really is the best month. I mean, have you looked at your calendars lately? After two years of smokin’ Miss Aprils, Morgan keeps the April tradition going strong. We celebrated April Fools’ by learning about dirty bisexuals and cooked tofu satay, an orange and almond salad and green tomatoes. We liked Here/Queer month almost as much as we like kittens so we’re keeping it going all month long. So far this time around, we’ve got posts on queer life in South Korea, LGBT icons of the Harlem Rennaissance, worldly food, going mad in New York, and Ann Arbor, Michigan. We’ve also heard from Brittani on her adventures at Dinah Shore, Riese on things she read and loved, and Crystal on the top ten female crime fighters. Laneia made a playlist about a bear with bear in the freezer because she does things like that and we’ve got another episode of The Newtown Girls. Now come on up and claim your whiskey-styled awards.

On Here/Queer: Ann Arbor, My Bubble and Native Land:

The I Hope You’re Bringing This Song With You To A-Camp Award to Rose: “We used to sing a song at Jew camp that went like this:

Wherever you go, there’s always someone Jewish
You’re never alone when you say you’re a Jew
So when you’re not home, and you’re somewhere kind of new-ishhhh
The odds are, don’t look far, ’cause they’re Jewish too!
(ba da da, ba da da, ba da da da da)

Now just substitute “Jew” with “gay” so that it reads “gayish” (or append “and gay!” to the end of “Jewish”). I think that no matter where you go, you will always be able to find your community, or carve out a place for yourself and others who share in your attitudes and beliefs. Plus, I think if you’re surrounded by love and acceptance and people who care about you at home, you can channel those feelings of validation and take them with you anywhere.”

On The Dirty Truth About Bisexuals, A Case Study:

The IRB Award Award to Beez: “I’m going to have to request the contact information for these interview subjects. For research.”

The Identity Politics Award to Tiger Gray and Chandra: 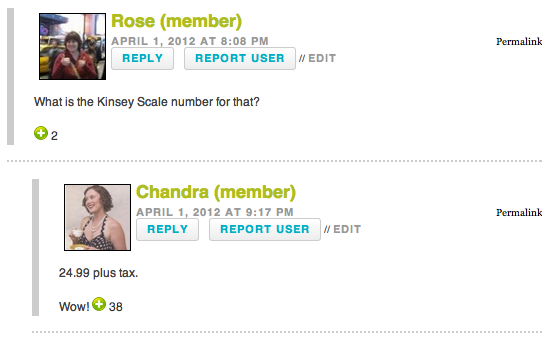 The Megalomaniac Award to Amanda Gun: “Yes! I completely agree. I think that since everyone knows you can’t trust bisexuals, the interview subjects were poorly chosen; a far better choice would be to interview lesbians or straight people about bisexuals. That kind of non-professionalism really made me doubt the author’s judgement.
I also object to this idea that we’re incapable of “respecting other people’s feelings”? I know for a fact that other people don’t have feelings. You need to fact check before you publish anything!”

On Playlist: Bear Has A Forty In The Freezer:

The Grin and Bear It Award to marebear: “This is unbearably amazing.”

The Neon Nineties Award to moose: “i wore it the first time, so i’m gonna sit this one out.”

On Dinosaur News! Were Your Favorite Prehistoric Beasts Actually Aquatic?:

The Coming Soon To A Theme Park Near You! Award to Michelle: 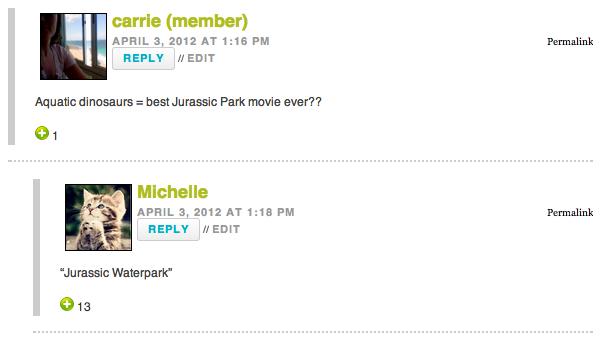