You might think that the gayest moment of my life would have been going to Pride in New York City or watching the L Word with a bunch of rugby players, but actually it was the night I stepped out of an elevator on the top floor of a nondescript building in Seoul, South Korea, and emerged into a sea of lesbians. It was my first week in Seoul, where I had moved to teach English at an elementary school, and mostly what I was conscious of before getting out of that elevator was how jet-lagged I was and how the entire city seemed to consist of an undifferentiated mass of neon.

What I was not at all conscious of until I walked into Labrys, Seoul’s second most popular lesbian club (not to be confused with its rival, Pink Hole), was that I had spent the entire week in a completely heterosexual world. As I became more familiar with Korea and with the language over the next two years, this veneer of seemingly perfect straightness gained more nuance as I learned to spot the cracks. But that first week, without even realizing it, I hadn’t experienced anything that could be characterized as gay and, what’s worse, I had squashed large sections of my personality in order to fit in. I had engineered a magical disappearing gayness act so convincing that not even I noticed the sleight of hand.

Earlier that day I had met up with a group of queer expat women I found through Facebook, and after a barbeque and karaoke we made our way to Labrys, which is to say that we walked into an unmarked building that also housed a clothing store, squeezed eight people into an elevator meant for four that was vibrating with the bass blasting from the top floor, and were transported to Homo Heaven. I have never seen so many lesbians in one place. The tiny dance floor at the back of the room was so crowded you couldn’t help but get all up in each other’s business. As a group of ten non-Koreans, we were a bit of a spectacle. Girls would come up and dance with us with gleefully terrified expressions, or take pictures of themselves with us in the background.

That night I found myself being serenaded at a karaoke club by a golf caddy named Jina who had earlier told me (through her drunk friend) that she had enough money to “take care of me.” I was both horrified and amused when I recalled this the next day, but over time I learned that there was nothing unusual about this girl. Dating in Korea is serious business. It involves receiving large stuffed animals as gifts, letting your date carry your bag (if you’re a femme, which I was told I was), taking pictures together every five seconds, hooking up in love motels and/or private DVD-watching rooms, and wearing couple t-shirts. Sure, there are casual hook-ups, but for the most part you have to at least say you’re dating first, even if that means “breaking up” the next morning.

Much of what made all this so intriguing — and so frustrating — was the language barrier, which ran the gamut from virtually no linguistic communication (like with Jina) to fluent communication (like with Eun Ji, the girl I dated for over a year, who majored in English in college). But even with girls who spoke English there was always a gap between how I wanted to express myself and how I did express myself, and most girls told me they felt the same way. I enjoyed operating on the boundaries of language, but sometimes I missed just talking — openly, freely, without hesitation. 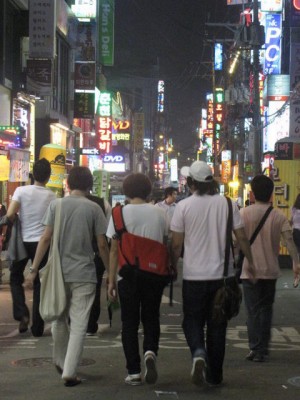 And after a while, I started to notice something else. Not only was I testing the limits of language in my relationships, in a way we all were — all of us homos — because there’s no space for us in mainstream Korean culture. Sure, there are words for gay and lesbian, but we are left out of everyday discourse. Without the possibility of speaking about our desires, we could only enact them. I think this partly accounts for the rigidity of the butch/femme divide: without the freedom to name yourself outside of the hetero matrix, you can only imitate it. At least half of the girls I dated expressed frustration with this binary and the way it constrains you to behaviors and dress codes that don’t always feel right. One girl said “My friends say I’m butch, so I have to be butch.” She practically sighed with relief when I told her she didn’t have to carry my bag.

There are some upsides to this whole subculture thing. You can get away with a lot when you are unspeakable and therefore unthinkable. And there’s nothing hotter than a club full of lesbians, except a secret club full of lesbians. But there are also obvious downsides. One girl told me that lesbian high school students, who are too young to get into the clubs, meet in love motels to drink and make out because there’s nowhere else for them to go; they allegedly form cliques so fiercely defensive that “if you date a boy, they will beat you up.” I started to see a tinge of desperation in the faces at the club as they moved in and out of frenzied drama and hookups and dancing and drinking; it felt like we had to get all our gayness out in that one place, at that one moment, because the minute we stepped out into the real world we would have to act out the straight show all over again. We would re-enter the world that has no words for us.

I often had to remind myself that I had it fairly easy as a non-Korean-speaking American. The vast majority of the Korean lesbians I met are not out to their parents or coworkers because they say they’ll get kicked out of the house or lose their job. My female Korean friends, gay and straight, get asked practically every week when they’re going to get married, by family members and complete strangers alike. Eun Ji, who I dated longer-term, told her co-workers she had a boyfriend so they would stop trying to set her up on blind dates. She still isn’t out to her parents, even though her mom has walked in on her with a girl numerous times. Once, after we had been dating for months and her mom knew we spent every weekend together, her mom asked me “Why doesn’t Eun Ji want to get married?” Talk about awkward dinner conversation. 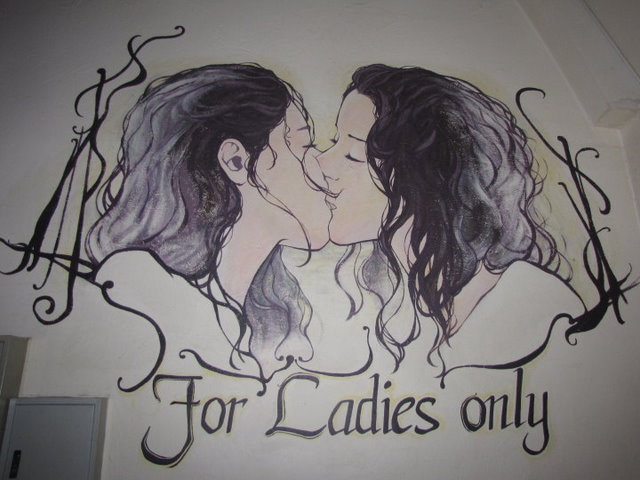 On the other hand, things are changing. Every straight Korean person I came out to had the same response: a) “That’s cool with me” and b) “Don’t tell anyone else because Korean society is homophobic.” Of course, there’s a lot more at stake in coming out in for a Korean person than for an American who’s going to leave eventually, but I think the claim that Korean society is entirely homophobic is overstated. At the two Pride parades I went to, families and old ladies passing by would stop and cheer us on. My co-worker and self-appointed unni, or “older sister,” got so excited when I came out to her that she spent an entire evening teaching me Korean phrases to use at the club, such as “Do you live with your parents?” Most of the major soap operas have at least one character who is gay or generally presumed to be gay. There are openly affectionate lesbian couples everywhere–on the street, on the subway, in restaurants. Despite being uncomfortable coming out to her family or coworkers, Eun Ji had no problem with holding my hand or kissing in public. Gayness is in the air, it’s just largely unacknowledged and unspoken.

This is not to say that if everyone came out the sun would come out too and everyone would be happy forever. Besides the obvious point that “full equality” is an uphill battle and an unattainable (though necessary) fantasy, there’s something beautiful about Korean queer culture right now that won’t exist in the same form once there’s a stronger gay rights movement .

As much as I deplore the violence of heteronormativity, I admire the innovative forms of community it enables. Although I recognize the destructive force of power, I also think it can produce beautiful things, like the feeling of entering a room full of people you can’t speak to but nevertheless, on a fundamental level, understand.

With all the intense processing and communication that happens in lesbian relationships, there was something special about living in Korea and meeting girls who would always remain mysterious and unknowable to me, learning to feel the weight of desire in a touch rather than a word, and feeling like we could maybe invent our own language since the world had no words for us. Within the violence of invisibility there is also a sense of liberation and expansiveness. 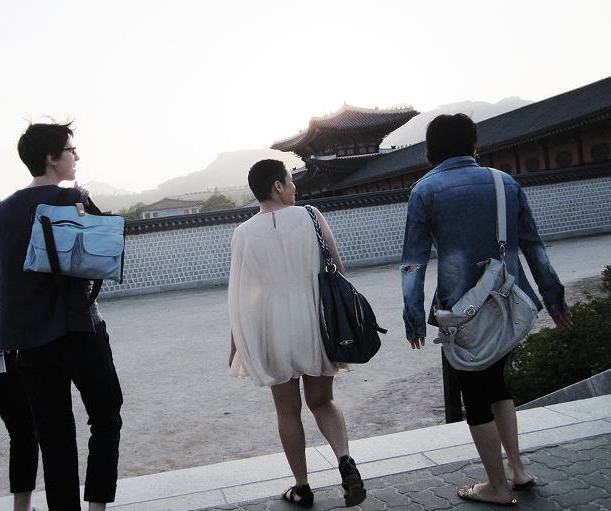 But the other day my girlfriend and I were walking around an art museum in California, where I live now, and the security guard said — very politely and matter-of-factly — “You guys look like a really cute couple. Have a nice day.” And I remembered the pleasure that comes from not only naming yourself but hearing someone call your name –knowing that the world has seen you and embraces you.

Hallie has written 1 article for us.