I heard whispers of Margarita With a Straw when it first came out in 2014, mostly among my activist friends. It looked like the cinematic unicorn we’d been searching for: a love story between two disabled women of color, presented without sensationalism or pandering. The best movie out there about crip queers. Legitimately fun. I had my doubts – because honestly, consuming media as a disabled person is an exercise in disappointment. When a movie that romanticizes committing suicide so your able-bodied girlfriend won’t “miss all the things someone else could give her” grosses $205 million worldwide, you learn not to expect much. So I was cautious when Margarita finally popped up on Netflix. Could it be? Was it really that good?

Margarita is pretty damn close to the movie I’ve always wanted. It’s funny, touching, visually rich, and only slightly too syrupy toward the end. Its protagonist, Laila, fulfills most of my dream criteria for disabled characters. And save for a few veers into lazy storytelling (one in particular – we’ll get to that), it sets an encouraging standard for what disabled queer film can look like, and what it should already look like by now.

I’ll spare you a ton of plot up front; plenty of able-bodied reviewers have that handled. Suffice to say that Laila leaves her home country of India for New York, where her cerebral palsy and emerging bisexuality collide to blow up her entire life. She falls in love, reckons with her body image, comes out to her family, endures shattering loss, and generally does a lot of living in an hour and 40 minutes. But what strikes me about Margarita isn’t the arc of the story or its major events; it’s the little details, and as much what doesn’t happen as what does.

The first half hour alone features Laila getting into arguments, doing creative work, swearing, loving her family, celebrating her college acceptance, and masturbating in her wheelchair – almost of none of which we ever get to see disabled folks do on screen. And that last one, of course, shows us where we’re headed the rest of the way. Yes, this is a “disabled person discovers their sexuality” movie, but Laila is never healed (literally or figuratively) by that discovery. She’s one of the messiest characters in this movie. She’s clumsy about her desires because she’s figuring them out for herself, without an able-bodied savior. And in fact, when her aha moment comes, it’s not courtesy of some white guy who “likes her anyway” – it’s thanks to Khanum, a blind Pakistani-Bangladeshi badass who woos her at a police brutality protest (AKA the gayest meet cute of all time). 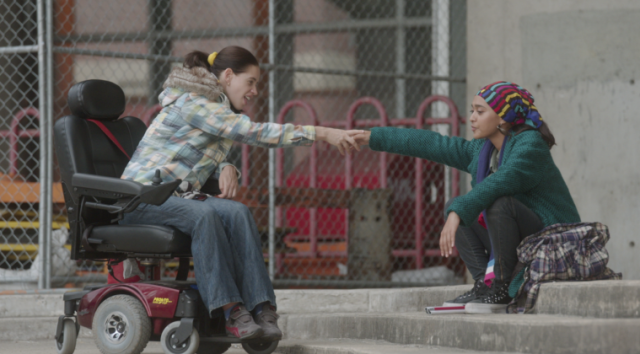 It helps that Laila and Khanum’s relationship is, well, hot. You can feel that they’re into each other from the start, and Khanum in particular comes across as someone who fully embraces what she wants. She says “I just like to be who I am all the time” and means it. And when she reaches out to touch Laila’s face because she “just wants to see her,” it’s easily the sexiest scene so far. She’s doing what she has to do to flirt, and as a result, knows how to use her body. She isn’t trying to hide from its realities; she’s sexy because of rather than despite her blindness.

And that’s the best part of Margarita: it doesn’t “despite” disability. Laila and Khanum’s disabilities matter in their lives. And you know what, thank God. Because so often we’re told – by authority figures, significant others, ourselves, and yes, media – that the “solution” to disability is to minimize its presence. Margarita counters that disability doesn’t need to be solved. Instead, it opts for the truth: some people are disabled, and most of us are out here being happy and doing stuff. We’re not necessarily sick (there’s noteworthy contrast between disabled and ill bodies in one secondary storyline), our disabilities can change shape day to day (Laila uses both a power chair and a walker), and we aren’t only happy because it makes able folks feel good. We are happy because we enjoy being ourselves. Imagine that.

Okay, about that unfortunate veer. I don’t want to give it more ink than it’s worth, so here’s the gist: after they move in together, Laila cheats on Khanum with Jared, the cute-I-guess British guy who types up her notes during class at NYU. (At least we know she’s exercised her rights in the disability services office. Ugh.) Anyway, this plot is so boring it’s exhausting. There are so many more interesting relationship problems than “whoops, the bisexual one couldn’t keep it in her pants.” Especially because Laila explicitly identifies as bi – she actually says the word, which is rare in film/everywhere! – I was so let down when the writers made her into the Unfaithful Slut. Bisexual characters too often get blamed for ruining relationships and I’m tired of watching that. At the same time, seeing a disabled woman a) make a gigantic mistake and b) pursue her sexual desires to a reckless degree was kind of refreshing? So I couldn’t hate it as much as I wanted to? Shows you just how starved we are for well-developed disabled characters.

I am unequivocally disappointed, though, that both of Margarita’s leads (Kalki Koechlin and Sayani Gupta) as well as its director (Shonali Bose) are able-bodied in real life. That actually surprised me given how well-received the film has been among disabled folks; I naively assumed that anything we liked that much had to feature at least one actual disabled person. Guess not! Admittedly, Koechlin and Gupta do an admirable job, and according to interviews Bose is bisexual and has a cousin with cerebral palsy, so it’s not like she’s pulling all this from nowhere (as able-bodied people are wont to do). But still, it’s frustrating to realize that even in the best movie of its kind to date, real representation – beyond good acting and secondhand understanding – apparently remains too much to ask.

Disabled characters are cropping up in more and more media, and it’s past time to start doing the real work of hiring disabled people to play ourselves. Margarita With A Straw fails on that front, but offers a strong primer on how to negotiate the plot and nuances of a disabled story. This was the best we had in 2014; now I want a movie that’s just as solid and made by disabled folks on both sides of the camera. Margarita can’t be our only option for disabled characters who aren’t straight white dudes. Cue it up on your next Netflix afternoon, see what it does well, and then let’s take the next step. There’s so much more to do.