You may remember that a few weeks ago I was talking about how excited I am to see the return of the Runaways title to the Marvel Universe for the first time since 2009. During the upcoming Secret Wars ultimate crossover event, Lumberjanes and Nimona writer Noelle Stevenson will be writing a new lineup of the classic team (keeping Molly Hayes from the original comics) and injecting new life into one of the most original superhero team comics of the modern era. If you weren’t here the first time around when Runaways was coming out, you missed out on one of the most diverse, female-led, genre-busting and ground-breaking superhero teams in all of comics. Because of that, I’m bringing back Drawn to Comics Classics for its second installment (you can check out the first, on Gotham Central to learn about the history of Renee Montoya). 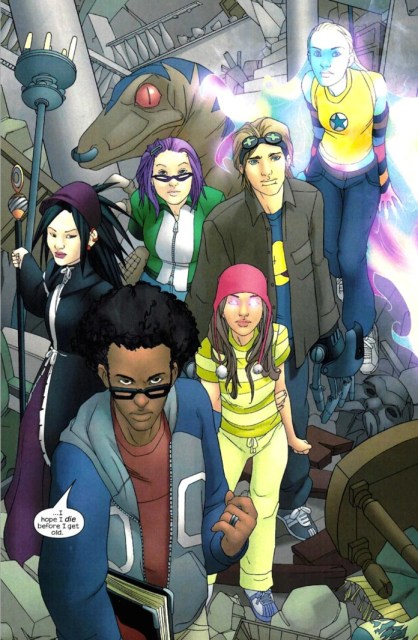 Runaways was originally created and written by Brian K. Vaughan, one of the truly great comics writers of our time, famous for Y: the Last Man and Saga, and artist Adrian Alphona. It starts with a group of five teens and one pre-teen who meet together once a year when their parents, a bunch of super rich people who live in Southern California, get together to talk and “donate to charity.” I put that in quotes because as we find out in the first issue, their parents are actually supervillains having a meeting to discuss how they, The Pride, will continue to rule the West Coast of the USA. This serves as a nice way to explain why seemingly the entire Marvel Universe takes place in New York and other Eastern cities. All the villains stay away from Pride territory. So these kids, Alex, the son of evil crime lords; Niko, the daughter of some witches; Karolina, who’s an alien; Molly, the youngest member of the group and a mutant; Gert, the daughter of a couple of time-travelers; and Chase, whose parents are mad scientists, find out about their parents. Not being evil themselves, they run away, giving the series its name. For the rest of the first three volumes, we follow these kids as they try to take down their parents.

The first 24 issues were all written by Vaughan, and these issues are all great. As superhero stories they’re extremely compelling, but that part of the comic often takes a back seat to the interpersonal relationships and character development. They really, and I mean really, get you invested in the characters. And just as a warning, some team members do die or otherwise leave the team, and when they do, it will probably break your heart to pieces.  There are also great cameos by heroes like Cloak and Dagger, Wolverine, the C-list superhero team Excelsior and more. 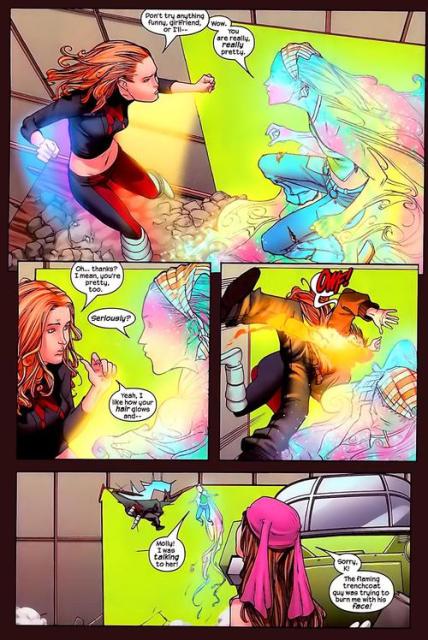 What really makes these cameos great, though, is the way the Runaways interact with the more traditional characters from the Marvel Universe. These kids come up with codenames but they rarely use them; Molly’s the only one who really ever wears a superhero costume; and since they’re fans of superheroes who rarely get to see them in real life (since they live on the West Coast), they treat them very much in the way that most comic book readers probably would: a mix of being starstruck, confused, iffy about the whole “superhero” thing and basically, like teenagers. One of my absolute favorite moments is when they’re fighting Excelsior, and in the middle of the battle, Karolina stops mid-flight to tell Julie Power, aka Lightspeed, that she’s “really, really pretty,” prompting the two to nervously flirt with each other a bit, right before Molly thows the mutant Chamber at her, knocking Julie right out of the sky. No worries, though, in the later series Avengers Academy, Karolina and Julie start flirting again and even end up dating. After issue #24, other writers Joss Whedon, Terry Moore and Kathryn Immomen take over to, uh, varying success. 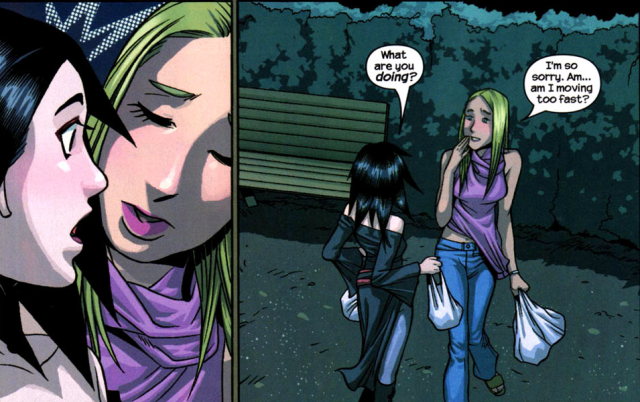 Every queer girl’s coming out nightmare. Art by Takeshi Miyazawa.

Now, I can’t not spend some serious time talking about Karolina Dean. Although there were a few lesbian superheros before her (Karma from the X-Men is one example), she’s the first one I remember reading, and definitely the first teenager, which for college sophomore version of me reading these books, made her even more important. And oh my gosh, the scene where she comes out is heart crushing. Not only does she try to kiss her straight best friend who rejects her, but then that straight best friend suggests that maybe she’s into girls because she’s an alien and that “maybe this is just something that girls go through” back on her planet. Harsh. Hey straight people, just a tip, when your friend comes out to you, even if it’s awkward, don’t suggest it’s a phase or that it’s because she’s an alien, please. Then, to make her coming out even more complicated, a young Super Skrull shows up saying that they’re supposed to get married in order to end an intergalactic war. And this Super Skrull looks like a guy.

Now, Skrulls are shapeshifters and changing gender is like “changing hair color,” according to this Skrull, named Xavin. Karolina’s new betrothed is able to present largely as female when interacting with Karolina. Still, you can be sure that when you’re a queer teenager who suddenly gets engaged to a stranger the same day you come out, you’ll have some major stuff to deal with. But Karolina deals with it a billion times better than I ever would have. She’s so loving and accepting and has a huge heart (but also her depression and lack of confidence do play a role) that she agrees to marry Xavin in order to end an intergalactic war, and eventually, the two really do fall in love. Even if Karolina sometimes feels uncomfortable with Xavin’s shapeshifting and Xavin sometimes has trouble understanding what it means to be “human.” 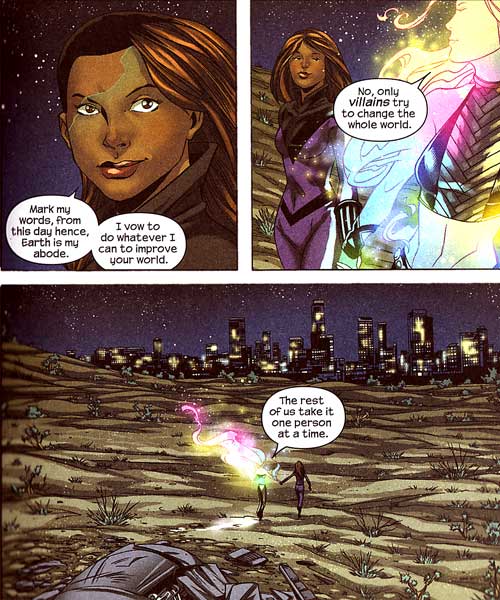 For as little as Xavin is actually in the books (she doesn’t show up until Vol. 5, which she’s barely in, same for Vol. 6, and then leaves in Vol. 9), she sure left quite an impression on me and on other readers. I’m going to use “she” pronouns for Xavin for a few reasons. When she and Karolina are about to get married, she’s in her male Skrull form, but shapeshifts into her female human form and tells Karolina “I’m only a groom for my fellow Skrulls; Karolina, deep down I’m a blushing bride like you,” and in Vol. 8 when she gets in an argument with Karolina, she unconsciously shapeshifts into her “female” form and when Molly and Karolina are excited that this means that that is her default form, Xavin says “I didn’t realize that was in doubt.” However, I do think it’s fair to read Xavin as genderfluid, rather than binary female, and Aphona said that he was told that Xavin should be drawn as different genders in different situations. There’s also this really terrific conversation she has with Molly where she’s asked why she doesn’t just stay a girl all the time, and that that would make everyone, especially Karolina a lot more comfortable. Xavin tells Molly that “some people would be more comfortable if Karolina liked males. Or if you were not a genetic mutation,” and that she’s not like everyone else and that’s okay, and all she’s asking for is acceptance. 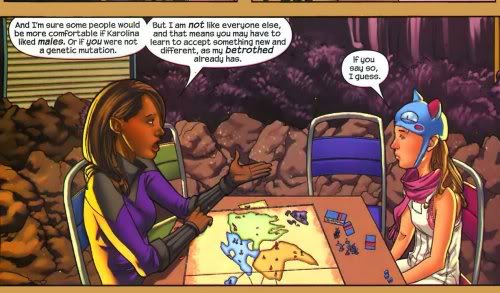 Xavin laying down some truths. Art by Adrian Alphona.

Many people count Xavin as the first transgender superhero in a mainstream comic (earlier examples like Lord Fanny and Coagula were in more fringe, or mature-reader comics), but others don’t quite count her, as she’s an alien shapeshifter and says that changing genders isn’t a big deal for her. Either way, seeing someone subvert gender and give some representation to trans people the way Xavin did was mind-blowing. For years Xavin was my number one favorite superhero and I would read and reread this series just to see a comic book character who was sort of like me.

The Runaways (which I don’t think is actually what they officially call themselves) are one of the only teams I can think of that has more women (or girls) than guys, and that’s a dynamic the team kept no matter who joined, who left or who, sadly, died. It’s also one of the most diverse teams to ever exist. Out of the nine people who have been team members, five are girls, three are guys and Xavin is a genderfluid shapeshifter who leans toward being female. If you count Xavin, who when she’s being human, is black, then four out of the nine are people of color. The team even had Gert Yorkes, who was one of the few fat superheroes I’ve ever seen. 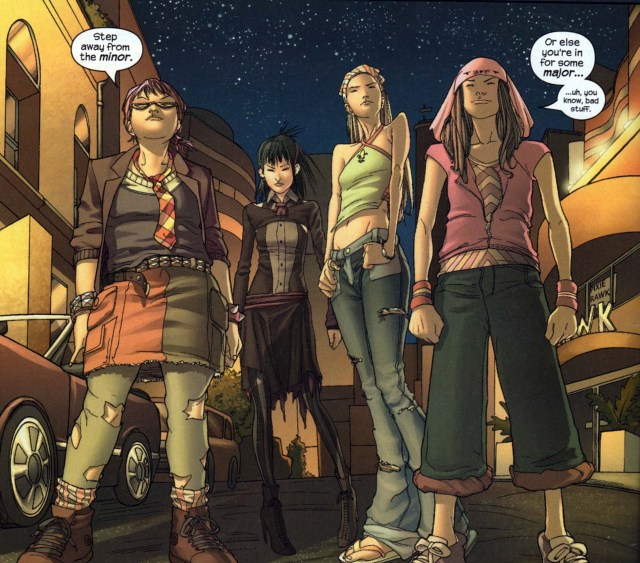 Some of Runaway’s girl power. Art by Adrian Alphona.

Runaways really paved the way for a lot of the best comics of the past few years. Books like Ms. Marvel, Young Avengers (the Gillen and McKelvie run) and Batgirl all owe a lot to this book. It was so far ahead of its time, not just in terms of story but also with its representation for women, people of color and queer people that it’s really quite shocking that it first came out over ten years ago. It’s also a must-read for fans of Vaughan’s work on Saga, Ex Machina or Y: the Last Man. Runaways, especially the first 24-issue run, is plainly one of the best superhero stories of the past 25 years, and if you want to see a great example of queer stories done right in comics, genre-busting and trope-challenging story telling or a book that laid a lot of the groundwork for the current trend towards more youthful, optimistic and girl-powered comics, you should check it out today.