This week was cray-cray! Rosie O’Donnell was all over the news, and some neon-haired gossip blogger actually BROKE Autostraddle for a couple hours by linking to our audio article of Rosie O’Donnell on Howard Stern. (Yes, we brilliantly embedded a full-quality hour-long audio file on our shared server, unprepared for the results of many people listening to it at once.) We all admired genderf*cking Suicide Girls, Lily dealt with airplane/life anxiety, Taylor unveiled her iPad ambivalence, and Jess probed the mind of EZ Girl – the woman behind the disembodied ghost voices behind The L Word.

And after following Autostraddle’s Prop 8 Gay Marriage Trail coverage for two weeks, we now await the closing arguments & final verdict with bated breath. Before I present the evidence of Autostraddlers’ awesomeness, let the record reflect that I brushed up on legal-ese TV tropes for this post. Now, if I may direct your attention to Exhibit A:

Turn of Phrase Award to Nick Mellish on Day 8 of the Prop 8 Gay Marriage Trial: “Bat shit crazy doesn’t even sum it up. That would be offensive to diarrhea-addled bats.”

We Value All Insight Award to Lissi on Day 9 of the Prop 8 Gay Marriage Trial:

“Unlike the brilliant mind above, i just felt like saying ‘Funsies’ is about the greatest world ever. Sorry guys, i let you down… no epic insight here…”

WARNING: Do Not Attempt Simultaneously Award to RachelwasHere on Sunday Funday: “People need to have more hobbies. Like knitting. Or lesbian sex.”

Queer Goggles Award to aaannie on Heard It On TV:

“So, kind of random, but has anyone else seen the Sprint ‘chairlift’ commercial? I’m only asking because I think the third person on the ski-lift, Rose, is a total lez! Am I projecting here?”

“Dear Autostraddle, With you, do I really need friends? You love me unconditionally, and you never fail to make me happy. You lovingly embrace me in your big gay arms on a daily basis. You will never borrow my favorite pink shorts and get crud on them or agonize endlessly in my ear about your relationship status. You will comfort me in the night when I’m feeling undersexed or stressed or frustrated; you will uncomplainingly watch sappy movies with me over and over; you will never tell anyone about that time I got drunk and ran up and down the stairs of my house naked, singing the 1812 Overture and trying to molest the trash can. And that’s why I love you.”

THE VASHTI SELIX ALLCAPS AWARD to TSwizzle on If eHarmony Embraces the Gays, Should Manhunt Straddle the Strais?: “YEH!!! DOUWN WIT DIKSHANAREES!!!”

OMG, You Know That Girl Too?! Award to Li on Kristen Stewart’s Sundance Interviews:

“She’s kind of a tomboy version of that cute alternagirl who works at the coffee shop, rides a bicycle, has all the tattoos and wears little hats, and you automatically think, ‘HOT LESBIAN!’ before you find out she’s dating some trust-fund beardo who is allegedly an artist, but nobody has ever seen his ‘work’ except for some photos he’s done of people’s cats.” 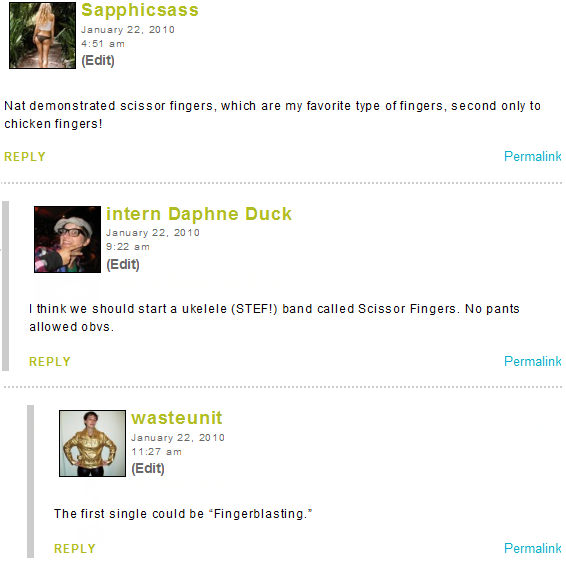 Lola Loves When You Name-Drop HDYSTC! Award to Dulcinea on Autio/Video Teaser of Autostraddle’s New Webseries:

“Also, the fact that Nat liked my half-joking AutNATic win comment so well she changed the name of the series is the best thing that has happened to me since that HDYSTC award! Yay for democracy!”

“In fourth grade I had a monster crush on Hannah Cohen because we both liked Rachel from the Animorphs. Turns out, she was just a big fan of strong female protagonists. Turns out, I was a big ol’ gaymo.”

“my personal anti-angst method is to watch really raunchy scenes from the L-word while in the middle seat. why yes, that lady is having sex with a wall, where are you flying to?”

“Rachel, I love you. Bam. I said it. If this all goes our way, maybe you and I can take a little trip to California. Wink wink. I’m only kidding. Unless you’d be into it, in which case I’m totes serious. I’m going to miss these recaps so much. You probably aren’t. Can you keep recapping things? Like a play-by-play of ordering pizza or something? I need you.”

Trust Me, I’m a Doctor Award to MsNJS on What If This Headline Made Something Up About Angelina Jolie & Brad Pitt Breaking Up: “As the resident Angelina Joliologist, I can assure you all that they have not/are not breaking up.”

T.W.S.S. Award to Alex! on Apple Announces the “iPad” to Our Collective Horror (and Excitement?): “Grr, the urge to play with it is killing me though. (That’s what she said?)” 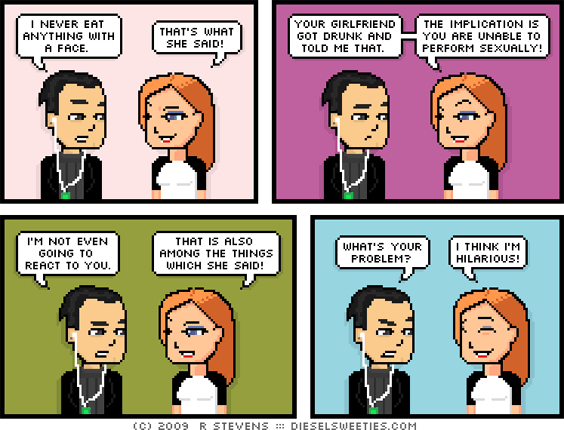 Our Goal in Life Award to Ziggy Hreins on Autio/Video Teaser of Autostraddle’s New Webseries: “To bravely straddle where no man has straddled before.”

The Perks of Being a Gayflower Award to JentheJew on Sunday Funday: “I’m going to start using my lesbianism as a defense against anything I do:

Best Pitch for a Roadtrip Buddy-Comedy Movie (aka Lezz Apatow) Award to Julia from MI on Day 11 of the Prop 8 Gay Marriage Trial:

“Lesbian Bed Death?! Sounds like what happens to my mattress after I’m done gettin’ it on. Have to buy a new one every time.”

The bcw Award for bcw on Obama’s State of the Union:

“he had to acknowledge the gays somehow and DADT is the safest bet right now. everybody loves gay soldiers isn’t that what like, band of brothers was about? no? i never saw it.”