Hey, tartlets! How’s it going? Weird, right? I’m going to tell you right now that the best part of my week was when my little brother found out what “fisting” means. It was both hilarious and terrifying. They grow up so fast, don’t they? That being said, some of us are still eating food made for children. Grace, on the other hand, is embracing her journey into adulthood by contemplating watching Buffy, Sarah is making sure you grow stronger in her new fitness column and we’re all just muddling along trying to figure it all out. For those of you who are fashion-minded, we’ve got a new He Said/We Said, a Pretty Little Liars Fashioncap and instructions on tailoring menswear to fit. We compiled a list of things campers are allergic to, Carmen collected the top 10 Drake quotes and Riese had more things she read and loved. In Here/Queer territory, we’ve got queer girl guides to Cleveland, Ohio, Spokane, Washington and Washington, D.C. and a story from Sydney’s Mardi Gras. Now let’s take this big step together into this week’s awards.

On Boundaries: A Thing You Need:

The Best. Date. Ever. Award to Sammy : “My last girlfriend and I spent hours writing in a notebook while passing it back and forth over coffee. It makes being an introvert easier for me because then I get to et my entire thought down for them to look at and think about.”

On Listicle: Nineteen Reasons I’ve Been Given To Watch Buffy the Vampire Slayer:

The Excuses, Excuses Award to Madi: “I bought myself a cupcake today to celebrate Buffy’s 15th anniversary! (I mostly just wanted a cupcake.) It was DELICIIOOOUS.”

On Listling Without Commentary: Shit You Weirdos Are Allergic To:

The I’m A Survivor Award to Kayla: “Whoever wrote “trees and also air” is who I want to make out with first. She’s probs not going to last very long in the forest.”

The The Only B.S. Here Is A College Degree Award to Alice: “I like to think I’m allergic to bullshit, but I didn’t think I’d have to worry about that at A Camp.”

On Top 7 Foods That I Think Are Actually For Toddlers:

The Lesbian Award to Digger’s Friends: “I tried to give my 4.5 yr old “Godson” a pack of those peanut butter cheese crackers and both his Moms nearly stroked out..One of them actually said “We’re lesbians..We don’t feed our kid that crap!” Sidenote: on a recent trip to the playground he was playing with a group of kids using one of those fake lemonade stand thingys, and they were taking turns pretending to “sell” lemonade and ice cream..When it came to his turn he shouts exciteely, “I know, let’s pretend we’re selling Hummus and Pita’s!” Yeah..It may be too late for me to save the little guy”

The We Call It “Shrivel Aversion” Award to Evidux and Alyssa: 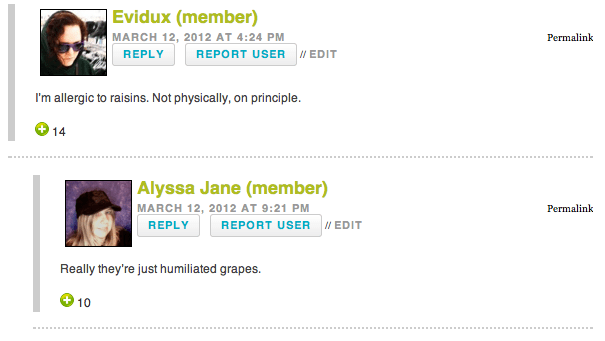