Madison, Wisconsin is a pretty good place to be a gay lady. Yeah, it has its faults — the state as a whole passed a constitutional amendment banning gay marriage in 2006, and while the state’s hate crimes law covers sexual orientation, it does not address gender identity — but there’s a lot to brag about as well. And if there’s one thing we’re good at doing in Madison, it’s boasting about our city. Should you ever find yourself in the presence of a Madisonite and mention you’ve never visited their fair city, you’re pretty much guaranteed to get a glowing tourism pitch.

Madison’s small enough (the last census put its population at about 233,209) not to feel overwhelming, yet it’s also home to big city amenities. Since we don’t really have the population to sustain a dedicated lesbian (or gay) bar, the scene here is far more integrated. The bars and clubs that cater directly to an LGBT clientele are mostly mixed and generally friendly to all: Club 5, the Shamrock, Plan B, and Woof’s, plus uber queer-friendly places like the Inferno.

That all-together-now vibe han’t always been around: From the late 1970s through the mid-’90s, the city gave birth to a wide variety of organizations and venues founded by and specifically aimed at a gay or lesbian audience. It was likely due to Madison being one of the first cities to pass LGBT equality and anti-discrimination laws. It was, as one woman I interviewed said about that time, one of the only places in the country “where it was legal to be gay.”

Madison was a sort of queer mecca, a place where gay people could come to live and be out and open without fear of legal repercussion. Though on-the-street harassment was still an issue, all of the women I spoke to agreed that, compared to where they’d lived before, Madison was a vast improvement. Like other historically oppressed communities, gay Madisonians had to band together to create their safe spaces and their own entertainment.

I’ve been a resident of this city since 2000 and a somewhat active member of the theatre and arts community as long as I’ve lived here. Over the years, I’ve heard references to events and venues of days past — things spoken of in equal parts reverence and wry, self-aware amusement: Hotel de Wash, Apple Island, the Lesbian Variety Show, LunaTech, Flaming Dykasaurus, DykeAppella (seriously, queers give the best names to things!) What they created now holds a sort of mythical status among a certain generation of queer women in town. 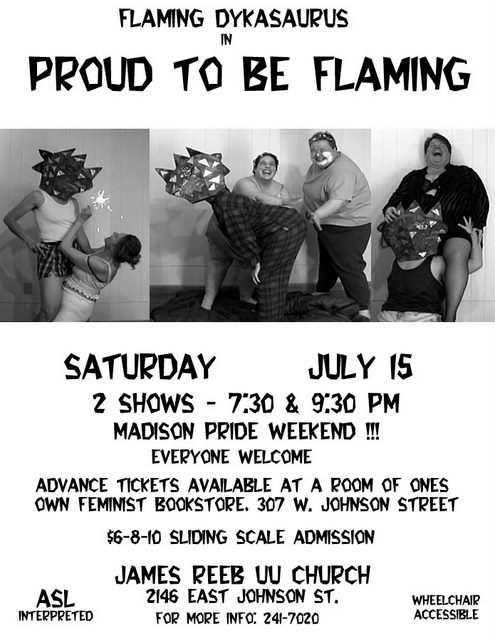 I decided to find out for myself what these names meant — to the women who created them, to those who participated, and to my own generation.

According to Lynda Finn, a management consultant who came to Madison for graduate school with her partner, Emily Jones, in the late ’80s, “If you wanna have cool stuff…you have to build it.” They stuck around, and were two of the founding members of a lesbian improv comedy troupe called Flaming Dykasaurus that performed regularly in Madison and went on a number of tours around the Midwest up until the early ’00s. They’ve since moved on to producing short video sketches like their L Word parody, “The Lder Word.”

“Madison has a great history of creative women,” Finn told me. “So when we saw all the great events they were putting on, we wanted to do that, too.”

She specifically referred to the Lesbian Variety Show, an annual production that ran from 1985 until 1998. The show was produced by the all-lesbian Kissing Girls Productions and staffed by the all-lesbian technical collective, LunaTech. It was, in its way, a microcosm of the lesbian scene and all of the changes that were happening within it: staid and political, righteous and sexual, messy and beautiful.

Those were the days of lesbian separatism, when often the only man in the entire room was the one contractually required union worker who “oversaw” the work done by the women who actually ran the show. 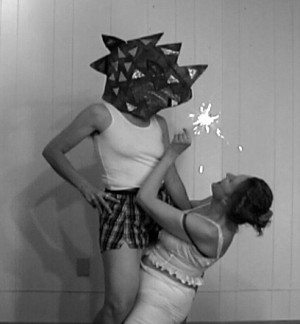 Jade River, who helped found LunaTech in the early ’80s and currently serves as the Consistery Executive of the Reformed Congregation of the Goddess (“the largest officially incorporated women’s spirituality group in the country”), related one particularly spectacular story about the trials and tribulations of the Show’s lone man.

“One year there was an act that was a whole row of drummers standing behind another row of women riding unicycles, juggling fire, all while completely naked,” she remembered, laughing. “The one requirement the venue gave us was that our union guy had to be standing on stage, off to the side, holding a fire extinguisher in case anything went wrong. So he stood there with his eyes shut tight, asking us to let him know if something happened and the extinguisher was needed.”

The Variety Show wasn’t all high spectacle, though. The line-up was determined on a mostly first-come-first-serve basis, without any review, and the result was true variety—some serious talent, some not so much.

“I’d be back stage working tech and sometimes there would be a singer that I’d have to plug my ears for and ask the others if it was just me or was everything just totally off-key,” recalled Gigi Vail, who has a background in theatre and frequently volunteered with LunaTech. But that was, Gigi and others told me, part of the charm. You never knew what you were going to get, how long the show would run or what cute girl you might pick up while there.

Because the Lesbian Variety Show became the place to be for queer women — not just in Madison, but the Midwest at large — the shows sold out year after year. After modest beginnings at a space at the Madison Senior Center, the show graduated to the much larger Barrymore Theatre which they continued to pack, often turning people away at the doors. 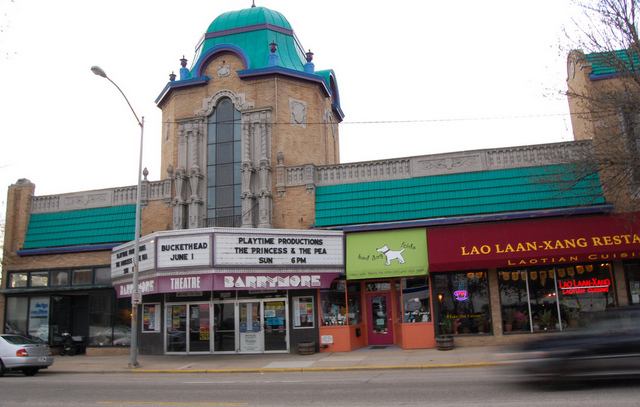 Eventually the one night expanded to fill an entire weekend — the poets were given their own showcase on Sunday afternoon, women-with-guitars ended up at the “Love and Lust” cabaret on Friday night, there was a craft show Saturday afternoon, and a performers reception on Sunday morning. Other unofficial events sprang up as well. It became the “Madison High Holy Days” — a sort of earthier, less booze-and-sun-soaked Dinah Shore.

And there was plenty of cruising. “No one told me until after it was done that I could have been getting all these dates!” Vail laughed. Unsurprisingly, it turned out women loved seeing other women running everything, including the technical side of the show — moving props, running lights and rigging trapezes.

The party didn’t stop after the High Holy Days. Lesbians had long been (and still are) running a women’s issues program (Her Turn) and a separate women’s music show (Her Infinite Variety) on the local community radio station, WORT-FM.

Apple Island was a women-run, women-only performance venue that lasted for over five years and was the only space of its kind in the area, with the collective playing host to poetry readings, open mics, play performances and dances. After Apple Island closed, the SPRAWL Collective stepped in to run a number of dances, dedicated, as member Tara Ayres said, to the idea that “lesbians deserved better” than what had previously been on offer in cramped church basements, smoky bars, and other less-than-ideal venues.

In the pre-internet era, these events and resources were vital to a community still coming into its own and facing discrimination from every side. Up until the early 1980s, one of the only ways to get in touch with the scene in any city was to call the Lesbian Switch Board. In Madison, it was a volunteer service run out of a tiny room at the Wil-Mar Neighborhood Center—a literal switchboard that lesbians could call to find out about support and social groups in town.

Most of the women with whom I spoke agreed that the shows and groups started to become less important—or at least, less attended–as it became more possible to connect with people online and as media slowly but surely began to better reflect lesbian faces and stories. But, they added, there has been a distinct sense of loss, too. Without the events and groups to bring the community together on a regular basis (“If you didn’t go to these things, you didn’t go out at all!”), they feel it’s less common now for people to know their LGBT “neighbors.” 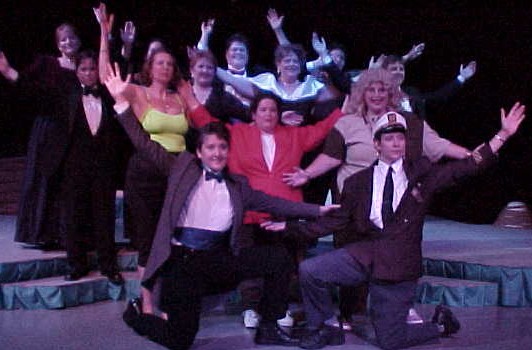 A younger generation of Madisonian is making some headway in bringing back the big festivals and community groups to help bolster the city’s distinctive LGBT community. Fruit Fest is now celebrated every June in the heart of Madison’s artsy near-east side, filling a strange gap in Pride month entertainment that’s existed for years. StageQ, a queer theatre company once dominated by gay men, has significantly expanded its offerings and membership to better include all letters of the LGBTQA alphabet soup.

Even so, things have definitely changed. The acronym has gotten longer, the community more diverse, less strictly defined. It remains for future generations to determine if that’s ultimately for better or for worse—or if it’s simply inevitable.