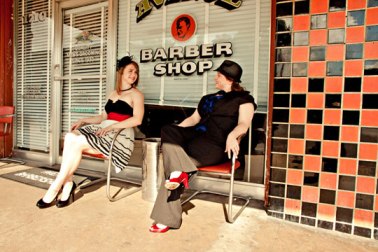 Michelle and Deborah in Austin, Texas via soyoureengayged.com

Last month we announced the introduction of Theme Months and kicked off with February’s “Art Attack.”I bet you’re wondering what fascinating theme we’ll be taking on in March and luckily I have that information for you.

This month’s theme is “Here/Queer.” We wanna hear stories of queer life with a really strong sense of place — a profile of a community leader or group, a history of lesbian life in a particular city, how it was to grow up in [x] place  — anything that relates to being gay in a specific place (or places).

Perhaps this is most easily illustrated with examples!

Examples of Here/Queer-appropriate material from Autostraddle:

+ Texas Is Not the Only State: Confessions of a Lesbian Exile in New York
+ Deanne Smith and The Lesbian Invasion
+ In “Gay Friendly” Philippines, Lesbians Still Forced to Keep it in the Closet
+ I Am Alike: A Nigerian Boi’s Reflection on Pariah
+ 10 Great Places to Meet Lesbians If You Have a Time Machine
+ My First Christmas As A Man In Kansas
+ Lesbian Sydney’s Sly Foxes and Snatches
+ Photographs: New York City The Night We Won Same-Sex Marriage
+ Maro Hagopian, Photographer of Choice Cunts, Celebrities & Characters, Threw a Party

Examples of Here/Queer-appropriate material from other websites:

Send your pitches to Laneia [at] Autostraddle [dot] com and cc Rachel [at] autostraddle dot com by February 28th. Include a resume and three samples (either PDFs from print publications or link to your work published online).