Normally, I don’t mind being a “typical” lesbian. In fact, I enjoy it. The no-nonsense wardrobe, the no-nonsense hair, the no-nonsense fear of impending carpal tunnel syndrome. I like being your everyday, run-of-the-mill queer. I like the fact that every item of clothing I own is either black or plaid. I like having short nails. I like pretending to understand Tegan and Sara lyrics. Oh, and the whole sex-with-girls thing ain’t half bad either. (C’mon, wrists, we can get through this!) 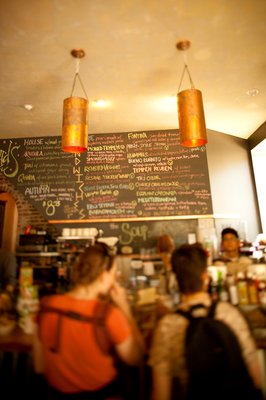 There are certain places, though, where being a lesbian just feels a little too cliché. My current haunt, King St. in Sydney, is one of those places. As is Mile End in Montreal, or Park Slope in New York or any vegan cafe in any city anywhere.

Hey, and please don’t get sensitive and misunderstand what I’m saying here. Don’t take it personally. Because if you take it personally, I’ll need to explain myself and the more you look at me like that the more defensive and flustered I get and now I’ve chosen the wrong words and yeah, I said that, but I didn’t mean it LIKE THAT. And now we’re caught up in this processing cycle, where whatever I say to try to clarify my point of view only seems to make you more and more hurt and I don’t understand why and for some reason you can’t hear what I’m saying, and now we’ve moved on from processing to actually processing the processing, and why is this happening and how can we fix it but then we realize we’re getting our periods and oh, of course, it all makes sense now and oh, how we’ll laugh and laugh and laugh. (After we’re done crying.)

So, you know what I’m saying, right?

I like being on King Street and in vegan cafes, as much as any self-respecting lesbo likes hot girls and substitute soy options. (Which is to say, A LOT.) But when I’m surrounded by a bunch of lesbians that look like lesbians that look like me, I feel kinda weird. I’m forced to confront a nebulous mess of emotions, contradictions and tingling sensations that are best described as– say it with me– “Feelings.”

I think my girlfriend sums up the strange feeling of unease that comes with being on King St. when she says, “It’s weird being, like, the fourth lesbian couple to walk into a restaurant.” I agree, but I can’t quite articulate why. (Which doesn’t mean I won’t spend the rest of this entry trying to.) One would think that being surrounded by “my kind” would make me feel relaxed and at home and like one of the gang. Instead, sometimes when I see another and another and yet another androgynous girl with sweepy bangs, funky glasses, a chunky watch and a graphic t-shirt, it just makes me feel like a cheap carbon copy, an inferior version of my own self. I feel like nutritional yeast flakes to actual cheese, Elizabeth Keener to Catherine Keener.

What was I saying? I’m cognizant enough of my own internalized homophobia to be wary of any subconscious tendency to excoriate the modern urban lesbian paradigm. (Helloooo, ladies!) I like us, and I like that we have so much in common, at least superficially, just because we all like mackin’ on other chicks. In some ways, it’s reassuring to see someone rocking the same style and feel a part of a larger community, a family, a massive sticky swarm of pulsating gayness oozing languidly into every crevice of the city.

So, ladies, I ask you, WTF? Help me make sense of this. Answers to any and/or all of the following questions are welcome.

Have you ever felt kind of cliché in a lesbo-heavy ‘hood? How do you deal with it? Do you even know what I mean? Is that how straight girls feel all the time? What’s your favorite academic-sounding word? How can I avoid carpal tunnel syndrome? How come people nowadays don’t harmonize with their sisters and wear matching outfits and yell out “hoy hoy” in the middle of songs?

And, most importantly of all, what ever happened to the the 3-person, face-to-crotch cartwheel? It looks like a really efficient form of transportation.

DeAnne Smith is a hilarious and famous lesbian with a website and a twitter account.
Feature image via Maro Hagopian, living f*cking legend for real. Educate yourself.