Lately it seems like every time you look up, there’s a judge making a decision that has some groundbreaking effect on our everyday lives – from the Iowa State Supreme Court’s fight for gay marriage to Judge Virginia Phillips’ stand against DADT to the 9th Circuit of Appeals’ confusing game of hot potato with Prop 8, it feels like judges are the new black. What happened in the world of judges this week that pertains to The Homosexuals? Well, there’s good news and bad news. And I always like to hear the bad news first.

Supreme Court Justice Antonin Scalia has never been our favorite judge; he’s notoriously conservative, and a constitutional originalist who believes in preserving the intent of our (white) (straight) (slave-owning) forefathers. And this week he announced that since our forefathers didn’t have the equal rights of women and gays in mind when writing the constitution, it’s really kind of a stretch to argue that they’re constitutionally protected at all.

Certainly the Constitution does not require discrimination on the basis of sex. The only issue is whether it prohibits it. It doesn’t. Nobody ever thought that that’s what it meant. Nobody ever voted for that. If the current society wants to outlaw discrimination by sex, hey we have things called legislatures, and they enact things called laws. You don’t need a constitution to keep things up-to-date. All you need is a legislature and a ballot box. You don’t like the death penalty anymore, that’s fine. You want a right to abortion? There’s nothing in the Constitution about that. But that doesn’t mean you cannot prohibit it. Persuade your fellow citizens it’s a good idea and pass a law. That’s what democracy is all about.

I am hazy on what our Constitution is in fact for, if not “rights,” but thank you for correcting me on that, your honor! It’ll be really interesting to see how Scalia’s unique views on this situation play out if Prop 8 makes it to the Supreme Court, as a significant part of No on 8’s case has to do with gay people being a protected class. Also, this is Scalia’s face. Just fyi. 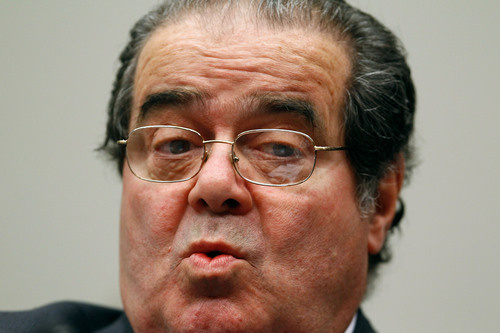 Now on to the good news! Victoria Kolakowski was sworn in Tuesday as the nation’s first transgender trial judge, and obviously she did it without anyone going out of their way to grant her, you know, protection from discrimination. Because she’s badass. Kolakowski fought to get into law school when they tried to keep her from taking the bar exam because of her gender identity, and she was one of those who got to legally marry her (female) partner in California before Prop 8 passed. She’s also an ordained minister in the Universal Fellowship of Metropolitan Community Churches and was a chaplain at University of California San Francisco Medical Center! Is there anything Victoria Kolakowski can’t do? No. The answer is no.

And that’s not all! Obama has renominated Edward DuMont to be a judge on the United States Court of Appeals for the Federal Circuit; if elected, DuMont would be the first openly gay federal appeals judge. DuMont’s approval by the Senate is waiting on the reconvention of Congress after the recess – after which there will be many more Republican votes to contend with. But our hopes are with Mr. DuMont just the same.