Perfect feels like a ton of pressure to put the shoulders of a 17-year-old girl, but the more I see of Yara Shahidi, in interviews, in speeches, on panels or in magazines, the more I’m convinced that the word is applicable here. If there is a moment where, to borrow from Shahidi’s speech at last year’s Black Women In Hollywood event, she is very unsure of herself or not certain that she’s saying the right things or if she’s acting the right way, I’ve never seen it.

At 17, Yara Shahidi walks through the world with preternatural confidence and wisdom. Smart enough to gain admission into Harvard University, with an assist from the former First Lady, Yara manuevers from conversations about protests in Iran to youth political engagement to representation in pop culture with uncanny ease. She is beautiful, of course, with her flawless cocoa skin, enviable curls and impeccable styling, but her beauty is like a mermaid’s siren, unwittingly luring you into a conversation about an organization she’s starting to promote youth voter participation. Even as she thrives professionally, she remains grounded, holding fast to her friends, family and culture. She is the perfect, exceedingly rare, combination of All-American effervescence and Black Girl Magic.

And, in “Liberal Arts,” the backdoor pilot of grown-ish featured during black-ish‘s third season, that was part of the problem. The show’s writers, Kenya Barris and Larry Wilmore, wanted to keep Shahidi and, by extension, her character, Zoey Johnson, perfect. 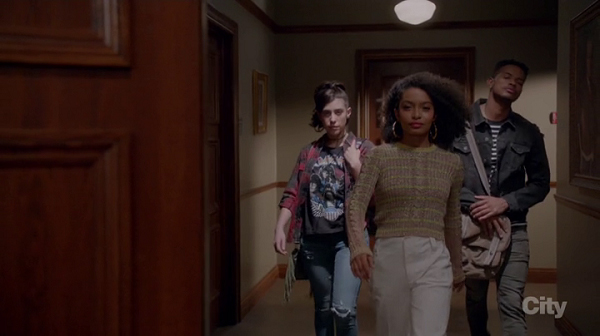 The Young Olivia Pope struts her way into the University President’s office to fix the mess she made.

But what “Liberal Arts” didn’t account for is the environment, and how putting Zoey in college means that she can’t be perfect. College isn’t the first time that we know we aren’t perfect, but it can be the first time that we learn that the things that we consider normal — the things that, ultimately, define perfection — have shifted. Part of college is seeing many of your imperfections clearly for the very first time and; scarier yet, having other people judge you for them. “Liberal Arts” doesn’t work as a pilot because it sacrifices the authenticity of the college experience to maintain the aura of Zoey’s likability and, by extension, Yara Shahidi’s perfection.

But somewhere between Zoey’s orientation visit to California University on black-ish and the debut of grown-ish last week on Freeform, the writers seem to have recognized their misstep. When Zoey Johnson returns to college this time, it feels like the show has grown into its own identity. Zoey’s still the naive, impeccably coiffed freshman, but there’s an edge to her this time. We get to see her make bad decisions, be judged for those bad decisions and face the occasional consequence. She’s not without flaws anymore and, as a result, it’s easier for the audience to see themselves in Zoey’s messy evolution.

But Zoey’s not alone in making that awkward evolution from child to adult — she’s surrounded by ragtag group of misfits who she meets in her Midnight Marketing class (also? midnight classes are an actual thing; who knew?). These aren’t the friends Zoey would’ve chosen — in one of her many voiceovers, she calls them “six losers who I normally never would have even spoken to” — but college has a way of forcing friendships between the unlikeliest of bedfellows. 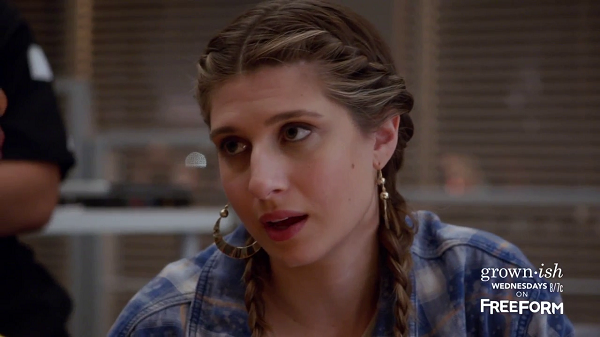 There’s Nomi Segal (Emily Arlook), the ultra feminist Jewish girl who lives to defy conventions. She likes rottweilers, moshing at Swedish death-metal concerts and Jason Derulo. But Nomi ends up in Midnight Marketing because of the one convention she can’t defy: the desire to be the daughter her parents always imagined. Nomi is bisexual and hasn’t come out to her family yet. She misses registration because she’s avoiding a conversation with her uncle, Cal U’s Dean of Students (Chris Parnell), about finding the perfect young Jewish boy, by hooking up with a random chick in the bathroom. 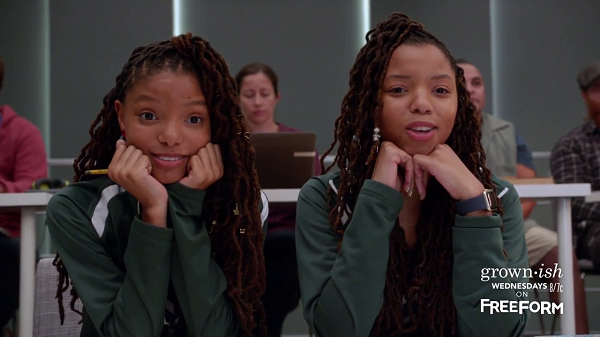 On the same week that grown-ish debuted, it was announced that ChloexHalle would join their boss/mentor, Beyonce, at Coachella. So basically, they are having the BEST. WEEK. EVER.

Then there’s Skyler and Jazlyn (Halle and Chloe Bailey), the track star twins. Like Zoey, they’re perfectly put together — beautiful, with warm smiles and charming accents — out of necessity, hoping to avoid the excessive scrutiny that society foists upon black female athletes. Fearing what failure might mean, both for them, their family and their community, Sky and Jaz have become expert code-switchers, living a “fake-ass front” so that they can be more palatable to whomever might ensure that they never have to go back to the ‘hood again.

And then, there are the boys: there’s Vivek Shah (Jordan Buhat), who, like the twins, has his eyes set on a more prosperous future, after having grown up in poverty, but unlike the twins or his father, Vivek’s not particularly interested in waiting on that prosperous future to arrive. Meanwhile, Luca Hall (Luka Sabbat) is the carefree artist who likes to push boundaries and people’s buttons just because he can. And then, there’s Aaron Jackson (Trevor Jackson). He’s a sophomore and campus activist and the only one taking Midnight Marketing because he actually wanted to take the class. Zoey’s had a massive crush on Aaron since she met him at orientation but he seems too invested in “the culture” to notice. 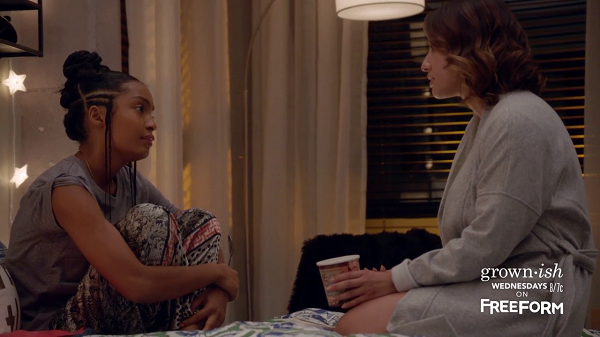 “And then I dreamt I gave a kidney to Selena Gomez…”

It’s that first night in Midnight Marketing and the friendships that she forges there that makes it possible for Zoey to reconcile with the first real friend she made at Cal U: Analisa “Ana” Torres (Francia Raisa). They connected over a shared love for Zoey’s hair and overly complicated coffee orders and ultimately ended up at a day party with some of Zoey’s old high school friends. Suffice to say, it does not go well. Ana’s homesickness and nervousness push her to drink excessively and when she ends up throwing up in front of everyone, her new friend — her only friend —abandons her. The next day, when Zoey spots Ana at registration, she quickly finds the nearest exit. But then, because college life has an incredible sense of humor, Ana ultimately ends up as Zoey’s new roommate.

grown-ish is a show teeming with potential and the adjustments made between the airing of the backdoor pilot and now leave me optimistic about its direction. In just two episodes, the writers have crafted a realistic college-going experience for Zoey and a cadre of interesting characters I already feel invested in. I want to see how Ana’s secret love for Barack Obama opens her up to exploring political ideas and identities at Cal U that her conservative Catholic upbringing might not have allowed. I want to see how Nomi’s sexuality is treated — if the women (or men) that she sleeps are anything other than passing ships in the night — and see how she grapples with relationships while her uncle’s hovering around. I want to see Aaron’s commitment to all things black dissected: to discover how much of it is truly felt, and how much of it, like the buttons he wears on his coat, is purely performative. And I want to see Zoey (and Yara) be a little less perfect, to fall down and get up with the help of her actual family and her new chosen one.

But while there’s plenty to love about grown-ish — including it’s incredible soundtrack — two things do give me pause. First, Deon Cole reprises his role from the grown-ish pilot as Professor Dr. Charles Telphy, the instructor of the Midnight Marketing class. While you can always count on Cole to deliver a laugh, I’ve found him more tolerable in small doses on black-ish and I worry about his overuse on grown-ish. And speaking of overuse: falling in love with the absolute wrong people and/or falling in love with someone indifferent to you or your feelings, is par for the course in college, so I don’t begrudge grown-ish exploring that with Aaron and Zoey (and possibly Luca). But by the second episode, watching her fawn all over and him — and his complete obliviousness to her attraction — already had the potential to swallow the show whole.

Just two episodes in, grown-ish is delivering impressive numbers for Freeform: the show was the network’s biggest comedy debut in almost six years. It also had the biggest digital debut in the network’s history, garnering 4.5 million viewers in the first three days.