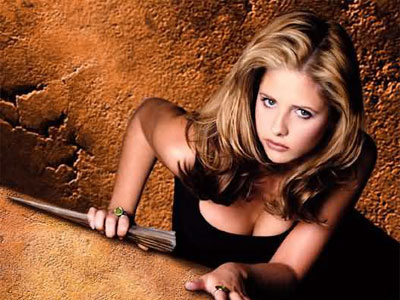 Today is the 15th anniversary of the “Buffy the Vampire Slayer” pilot premiering on the TV. I’ve only seen the first half of the first season. Here are things people have said to me to convince me to watch the rest. A lot of them are from Laneia, who apparently has a lot of feelings regarding this topic.

1. Willow’s impending lesbianism, which is actually portrayed w/out grossness or weirdness. It’s the epitome of adorable. This should be enough — I don’t know why we’d need to go any further.

2. It gets better after the first season.

3. It gets better after the second season/ the first season or two is just campy laughable bullshit/ just do your best to stick it out/ stop whining about how campy it is and just keep watching

4. There’s a musical episode. They sing. The whole time. It’s amazing. YOU CAN SING ALONG.

5. You [Grace] kind of look like Buffy. Not really, that was a lie.

6. It’s like Cracker Jacks, and the prize is lesbianism.

7. Think about how much more pop culture references you can make. “They got the mustard out” is some funny shit, and you don’t even know why.

12. How do you feel about Seth Green? Seth Green is good in this series.

13. The one-liners are eventually fantastic.

14. Their HQ is the school library, which i’m going to assume is also your fantasy HQ, if you’re being honest w/ yourself. Just — Grace, seriously — they’re constantly surrounded by shelves and shelves of old books; Buffy’s watcher is an even bigger nerd than you; they spend hours/days/weeks doing research and thinking critically. THEY CALL THEMSELVES THE SCOOBIES.

15. Buffy is your heritage, you have to watch it eventually.

16. “I just started trying to watch buffy the other day!” -Riese

17. After you finish buffy you can move on to FIREFLY! !!! (I am a little insulted that Laneia thinks that I haven’t watched Firefly, sidenote.)

18. On a superficial level, there’s so much 90s nostalgia in one series, right down to the matte grey nail polish, dark red lipstick, babydoll tees, bangs, chokers, high-waisted pant situations, you name it. But also here’s the thing: you’ve probably at least seen bits and pieces of 90210 or Dawson’s Creek or such — like, they’re punchlines at this point. Buffy is never a punchline (unless you’re hardcore into the Twilight/anti-Twilight crowd, and you’re not). So basically you’re going back in time, to when girl power was something we believed in w/out irony or nostalgia, and being given the gift of an entirely new tv series built on the unironic idea of girl power, camp and nerd humor. Joss Whedon more or less LIVED for girls like you.