Hey straddling straddlers. How’s it going this fine February day? I am wearing a sleeveless shirt and baking a cake and exuding a general air of joie de vivre because the sun is shining! Do you know how rare that is in Ohio in February? Besides being a joyous week weather-wise, it was also a pretty smashing week on the Internet. We made a winter kale salad, cooked (ahem, drank) along to Josie and the Pussy Cats, and read more things that Riese loves. We kicked off ART ATTACK month by putting out a call for submissions and starting with a gallery of art by 100 queer women. In music, we had a playlist for writing heart-bending words, new music from M.I.A. and friends, and 13 degrees of Sleater Kinney. Riese counted down 10 badass best friends from TV and announced that she’s talking at Yale’s Sex Week. We’ve got a video from the 2012 calender release party and 2013’s gorgeous Miss February. Finally, don’t forget to vote for us for the
2012 Bloggies!

The My Cats Watch My Stuff Leave The House Award to Kimbit: “Not gonna lie, when I saw “Sara and Cat react” in the headline, I expected to see Sara Quin and a cat reacting to something in this article. #dissappointed”

On NSFW Lesbosexy Sunday Will Never Use Bacon Lube: 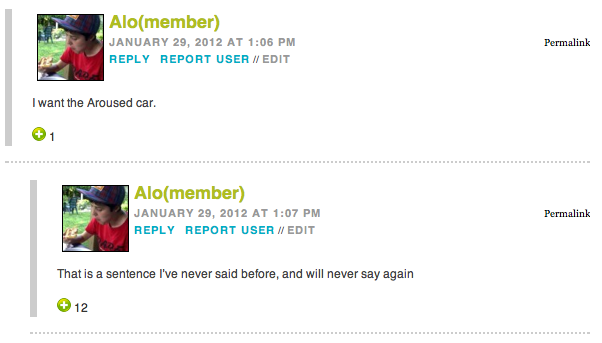 On Also.Also.Also: Who Wants Us To Get Gay Married Today?:

The Death Eater Award to Digger: ““Newt Gingrich” sounds like the name of a villain that JK Rowling made up.”

The …Would Make a Beautiful Tomboy Lesbian Award to Breezy: “Okay so I know this doesn’t really fit with the theme of the post because this is about lady best friends, but:
CHUCK BASS.”

On This Is a Video of Kristen Bell With a Sloth:

The Storytime Award to Tasha Scribbler: “This reminds me of when I was attacked by a sloth at the LaBrea tar pits.”

On Art Attack Gallery: 100 Queer Women Artists In Your Face:

The Way Better Than CORE Award to Bette Porter: 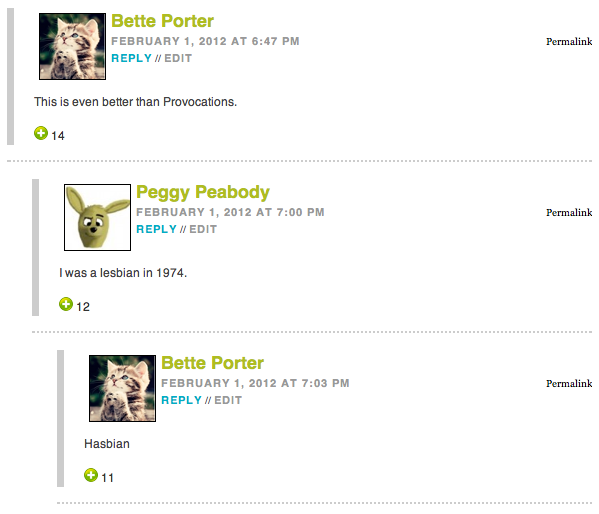