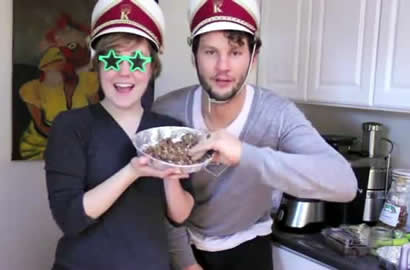 Well hello! This week on “My Drunk Kitchen,” Hannah Hart makes a vegan cheesecake, drinks whiskey, and tells several lesbian jokes. It’s like she wants you to salivate over her! Just kidding you were already doing that.  Also, this is the first time she’s had a cooking partner: His name is Rawn, and he’s a vegan. At first I was like, “Oh no, she’s cooking with another person, this is going to be awful,” but then there were tears in my eyes from laughing so hard, so I got over it. They make a very good team; he’s funny on his own, but he’s also smart enough to let Harto take the reins. Anyway. This is definitely the best one since at least the ice cream episode. Unrelated (?), she is super, super drunk in this video.