Okay, there’s nothing particularly cool about the comment awards, I just needed a name and we’ve already used “Fisting, Comment Awards”. But there are some pretty funny ones! So about this week: in Pretty Little Liar Land, Riese recapped episode 206 and Lizz fashioncapped number 2-oh5. Riese also indulged her masochistic side recapped The Read Fucking L Word just for you! Taylor found the queer in Google+, MJ has the secret to a perfect alternative lifestyle haircut, and Laneia watched movies for the naked bits. Grace taught you how to handle rejection, Jess interviewed Raquel from The Real Word OG, and Riese & BCW cooked to Romy and Michele’s High School Reunion. We’ve got a new fashion formspring courtesy of Lizz and you all talked about the Women’s World Cup final.

Go turn on a fan, it’s time for the ASS Group of the week.

On You Have Queer Style Questions, We Have a Formspring For That:

The And That’s How Babygays Are Made Award to Mornyng: “One time my parents got me a creepy crawler machine for Christmas even though I had asked for an easy bake oven. And thats how I ended up being gay.”

The Also Someone Gets Angry Award to magiclovemuffin: 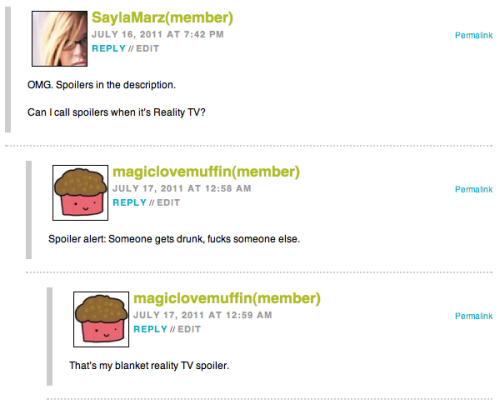 The Starfucking Award to Denbo is my HomeGirl: “This is THE GREATEST MOVIE EVER OF ALL TIME AUTOSTRADDLE GET OUT OF MY BRAIN EVAN RACHEL WOOD BISEXUAL!!
Janeane G. rocks the shit out of this movie.
Side note, this one time I saw Janeane Garofalo at a coffee shop and went up to her was all like, “Romy and Michele’s made my high school existence bearable” and she was SO nice to me. And then her friend was like, “oh, you were in that movie?””

On The Bachmanns Say They Don’t Pray Away the Gay for Pay:

The OMG Award to lilyv: “have you ever wondered what an english girl reading brett easton ellis sounds like? you guessed it, it’s READING TIME!!!!!!
http://vimeo.com/23156368”

The I Like How You Think Award to difficiledame: “I just want to say
I took my shirt off anyway.”

On The Real L Word Episode 207: Play With Fire: 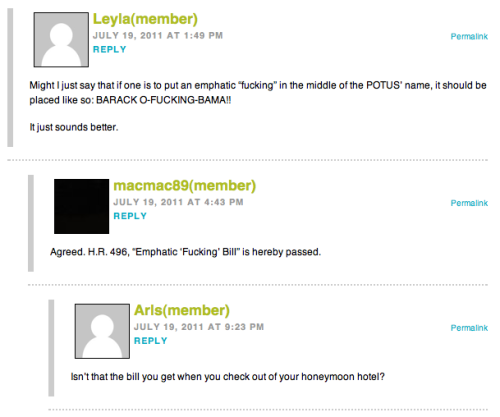 On Circles, Pokes and Profile Holes: How Google+ Queers Facebook:

The Mine Inexplicably Recommends Space Shuttles Award to southpaw: “Another plus about google+ is the lack of creepy data mining ads, although gmail does tend suggest lithuanian brides and aquarium fittings pretty regularly.”

On Reflecting on Extreme Couponing: Could This Be The End of An Era?:

The Saving Money on Paper Towels Award to e: “after i watched this show, i bought the sunday’s paper (with the coupons), forgot, and used it later to wipe up juice i spilled. i think i’m doing it wrong.”

On How to Get An Alternative Lifestyle Haircut: Soozeecuts Tells All:

The Depression Hurts, We Can Help Award to salty box, chrissie riot: 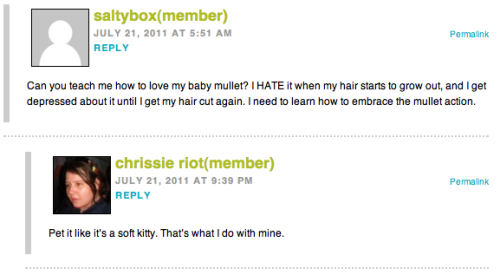